Cross Her Heart by Sarah Pinborough

May 23, 2018
Cross Her Heart is the latest from Sarah Pinborough a taut psychological thriller with enough twists and turns to make your heart jump and keep you invested till the explosive climax. 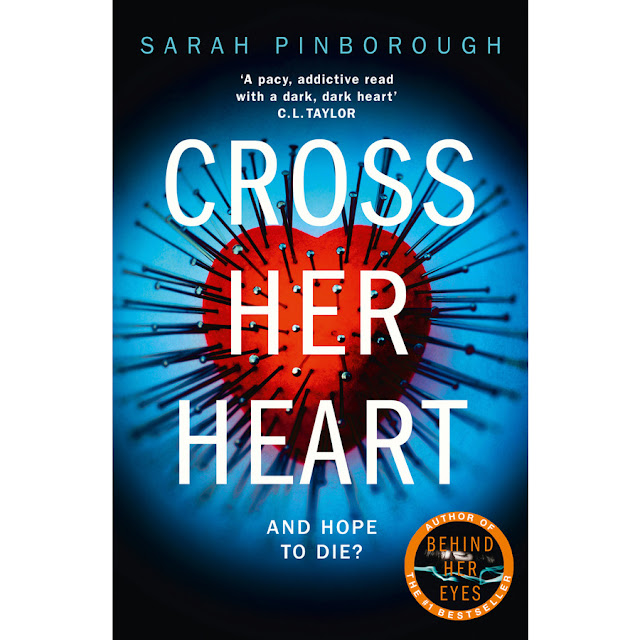 I am a big fan of her works - especially after the hauntingly evocative novella 'Language of dying' and her stunning thriller 'Behind Her Eyes' with that mind-blowing twist of an ending. So Cross Her Heart is sort of a spiritual sequel to Behind Her Eyes - with similar premise of an tangled up web of lies and deceit at the centre of it with an interesting experiment in the narrative that weaves between Now, Then and After.

Truths be told, while yes I loved the book - I thought this was more a mainstream, straight forward psychological thriller examining the pedestrian life of a single mum, delving into the dysfunctional rut that defines her life which slowly devolves into unimaginable horrors when a secret from her past comes awake. It is minus the supernatural horrific elements that have been the secret sauce to Sarah's past novels, which I had come to love. For that reason, Behind Her Eyes scores a notch above this one, at least for me. But all said, it still remains a terrific book that brings together the shifty suspense balanced along the serrated edge of a knife and the mainstream appeal of a book couched in the comforts of a thrill-ride where you feel you know what's coming around the corner.

The main story revolves around this central character Lisa whose past comes back to haunt her in manners, most horrific even as she gamely struggles to get a grip on her life.  A single mum trying to come to grips with the growing chasm that is opening up between her teenage daughter and herself, adjust to the corporate race with this new bunch of ambitious go-getters in her office, struggle with her conflicted feelings of the heart kinds, that too for a client - All this while dealing with overwhelming sense of guilt about her past which surfaces up all the time. Lisa is overly-protective of Ava, her sixteen-year old daughter who is just coming into her own, a typical sulky teenager who hates the cocoon being spun around her by her stifling mom while trying to deal with the emotional turmoil of her hormonal overdrive - love, lust, sex, friendship, online dating, weight and looks. Issues abound in her life without her mom butting in on everything. Lisa's best friend Marilyn meanwhile, is dealing with her own domestic problems of a husband, down on his luck jealous and insecure and given to frequent outbursts of uncontrolled anger.

Till we hit around one-thirds of the book, it actually reads like a regular story of these three women trying to come to terms with the raw hand as dealt out by fate. And then a chance incident where Ava saves a drowning kid in the local fair that catapults her into a local celebrity status, opens up a nasty can of worms. Reporters and media journalists hound Lisa and Ava's house early in the morning - and that's when Lisa drops the bomb on Ava - and us readers! that they are here......not for Ava, but for her.

After this we shift into top gear without any warning - and then zoom away as the skeletons in the cupboard ( And there are many!) start dropping down like anti-tank missiles. The revelations build up hard and fast. Sarah uses the alternating timelines very effectively to build out the story - cleverly leading us on false fronts and then dropping another bomb on us. Artfully misled to give us a glimpse unto the bottomless chasm of evil that lurks inside us humans and the levels we will go, to fulfil and act out those mad desires.  Lisa's character in the beginning seems similar to Louise, from Behind Her Eyes. The single mother down on her luck with men, whose world revolves around her kid, But as the past surfaces we see her in a whole different angle.  Ava is your typical teenager and her POV chapters are a breeze but you quickly realise that Sarah is just using Ava as the bait. The hook-line-and sinker is the explosive tumultuous past of Lisa's character . The unreliable characters, artfully deceitful narrative leading to false doors, the heart-stopping revelations, the dizzying twists all Sarah's signature marks are here on full display.

A compelling narrative on friendships - compassionate and toxic, relationships - both broken and also refreshingly inspiring, lives built around lies. Sarah's prose as usual is binge-worthy full of quotable lines about the darkness in our lives. A fascinating read that again catapults Sarah back unto that pantheon of the best writers out there today in this genre, spinning us twisty tales of thrilling terror. Must read, possibly one of the best thrillers of the year!
2018 Books Book Review Sarah Pinborough thriller