February 14, 2018
So the first WoW meme on my blog [ Picking up on the themes originally started at Breaking The Spine blog, we feature the second installment of The Band, the sequel to the wildly popular debut that hit the charts on the top ten world over last year, Kings of the Wyld by Nicholas Eames. Described often as George RR Martin meets Terry Pratchet - I am currently half way through book one and I cannot put into words, the indescribably warm and fuzzy feeling I get as I read the same. It's absolutely nuts, cracks me up every few pages and is a quest of old men, banding together for that one last adventure before kicking the bucket. It's just such a riot of a read that I cannot stop blubbering. But hark back to the book on hand, we present Bloody Rose, Band# 2 by Nicholas Eames. 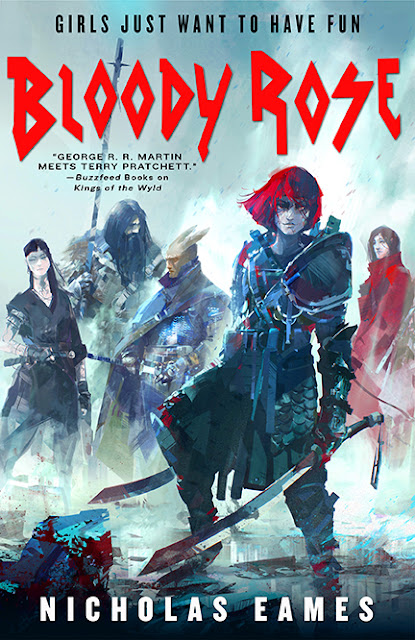 Tam Hashford has always dreamed of living through glory days of her own. With a renowned mercenary for a mother and an illustrious bard for a father, battles and adventure seem the only way to really live.

So when she learns that the most revered mercenary crew in Grandual is in need of a bard, she grabs her lute and goes on tour. Led by the infamous Bloody Rose, Tam and her new band embark on a mission that will earn them everlasting fame — or certain death.

It’s time to take a walk on the wyld side.

Out on July 10th from Orbit books.

Bob/Sally said…
There are few books I'm anticipating this year as much as this. The first was so much fun, such a surprise, I already let Nicholas know I'd be stalking him at the first sniff of an ARC.
February 14, 2018 at 9:59 AM