February 18, 2018
As the first superhero Marvel Cinematic Universe movie of 2018, there was a lot riding on Black Panther. And then there was this racist group that tried to sabotage the movie on RT through discriminatory messages on FB and other social media. The furor perhaps just added fuel to that brightly burning fire. At 98% rating on Rotten Tomatoes, boy - does Black Panther deliver! After having watched this movie twice last weekend ( That is how much I LOVED it!) I now think about whether, this indeed is the greatest of all the series of superhero movies produced in the recent times. 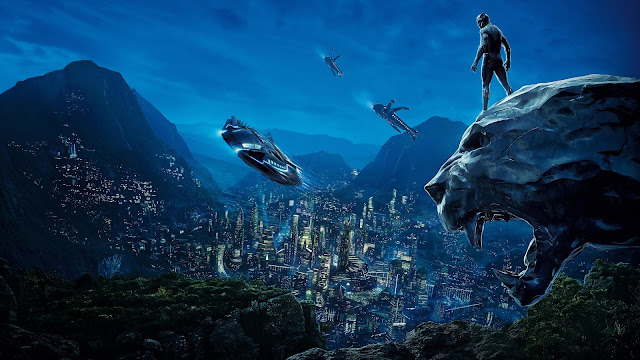 Sure - It is part of the burgeoning universe of Marvel Superheroes. And we first saw Black Panther in Captain America: Civil War, where the character T'Challa watches his father, T'Chaka die in the bombing of the UN Assembly in Berlin. We watched his pursuit of a speeding car in a bullet-proof catsuit and wondered whether this guy can actually stand up to the cool factor and the might of the rest of the Avengers. And so Ryan Googler gave us Black Panther - not really an origin story, no. But what he creates is a spellbinding story of how T'Challa becomes the leader of his people, the protector of his realm and the man and the hero, he was always destined to be. It's a compulsively addictive narrative that presents an arresting visual of an African nation named Wakanda - long believed to be a third world country of 'textiles, shepherds and cool outfits', which in truth is a technologically advanced marvel (yup: pun!) that could in fact help the world outside become a better place. Blessed with the richest reservoir of Vibranium, one of the rarest metals on Earth, courtesy a meteorite crash on Wakanda that creates a mountain full of that ore, the glitzy futuristic technology has countless usages: saving life (Kimoyo beads, anyone?), long-range communication devices (the mother of Jio!) driverless or remote controlled cars and futuristic jet-planes, hand-held sonic cannons - and best of all, metallic suits with Nanimes that absorbs the kinetic energy of bullets and missiles and redistributes the same all across the suit to make it the deadliest assault weapon ever. (Did I hear you say, Phew!?) 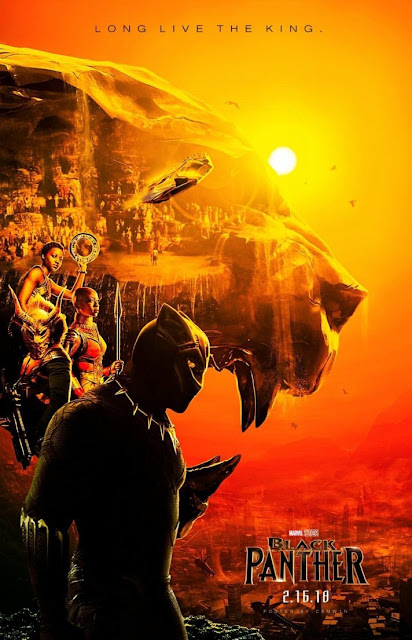 So T'Challa is coming back to his home, Wakanda to take on the mantle of the King and Protector of his people. But he is riddled by doubts: As to whether he would be a great king for his nation, while still grieving for his father. And also should he be protecting the identity of his great nation from the rest of the world and thereby, denying the needy ones? He is forced to think on these terms and silenced to a tongue-tied bashfulness by his ex-lover Nakia ( Lupita N'yong'o) who, as an agent or spy for the Wakandans, has seen the suffering of the outside world and strongly believes in justice and upliftment of the poor. But he is soon jolted back into action - when in the outside world, an old enemy Klaus (Played by Andy Serkins, for once playing a flesh-and-blood character as opposed to his motion-capture characters!) steals a Wakandan artifact made of Vibranium in a London Museum and plans to sell it off to the black market.

We soon dive headlong into a James-Bond-style action set-piece in a casino - where T'Challa flanked by his trusted aides Nakia and the head of his all-female body-guard Dori Milaje, Okoye (Danai Gurira) wants to bring Klaue to justice. Some heart-pounding action [ Okoye with her blindingly fast spear moves  -and the Black Panther donning his new suit, chasing down and crashing cars all over the crowded street-roads ] and a frenetic edge-of-the-seat car chase sequence through the neon-lit streets of Busan, South Korea later, we settle into the actual rhythm of the movie as we are introduced to Eric "Killmonger" Stevens - an american CIA assassin who's trained to bring down governments and destabilize monarchies - who in reality, has a far more closer connect to Wakanda and T'Challa. The story takes a turn for the ugly as hidden truths come to life and T'Challa has to not only fight for his life but for his country and every principle he holds dear.

With an impressively almost all-black cast that is supremely talented, Ryan Googler who last gave us Creed, poses some hard-hitting political identity questions in this visually spectacular movie - that gives us CGI-heavy scenery of an alternate Africa which is anyways gifted with supreme natural beauty [ like Wakanda, is blessed with the best sunsets in the world! A scene right at the end of the movie will steal your breath away as we watch the sun set on the world, seen from a cavern shaped in the form of the jaws of a black panther ] Rachel Morrison, the cinematographer is just one of the shining female jewels of Ryan's offering. She regales the big screen with the renditions of a supremely beautiful African nation - be it the first scene of T'Challa's coronation set amidst beating drums along the edge of a roaring waterfall or our introduction to the glitzy futuristic capital of Wakanda or even the amazingly eerie snow-ridden terrains of the Gorilla-tribe high up in the mountains, it's all equally mesmerizing and breathtaking!] - All shots of color and pure awe! The background score is just pure magic, as Ludwig Goransson the composer, visits many parts of Africa to bring together a haunting evocation of the beautiful music that this continent has to offer. [ Included below is a video capturing how he made this amazing score!]

Also interesting to note is that the cast is female heavy and they aren't just arm-candy but powerful proud women, who decide the course of action and the fate of Wakanda. Be it Nakia, the woman who would do anything for her love and her country or Shuri (Letitia Wright who is definitely the most fun element of the whole movie!) the king's little sister, a precocious tech design genius who flouts tradition and who would make Tony Stark look like a lab monkey or the king's regal mother Ramonda (Angela Bassett) or the ferocious General Okoye who kicks ass and whose loyalty to the Throne is beyond reproach and is undoubtedly a pleasure to watch as she sets into motion, kinetically supercharged action-yoga with her spear and her honor-guard.

A word for Martin Freeman ( John Watson to the BBC Holmes) who plays the only significant white-male in the cast: This guy is funny without wanting to be. And then there is Winston Duke playing M'Baku the leader of a rebellious tribe. Jeez, I laughed my heart out because of this guy.

Chadwick Boseman, the lead man - the conflicted superhero in the middle of this unfolding crisis - carries the movie on with his unfazed charisma and unflinching doggedness to wade through his self-doubts and the war on his ancestral ideologies by outsiders. He is almost perfection in every frame, a thoughtful leader of the people, not bending down to the great weight of responsibility on his shoulders. And that brings us to the villain - Eric Stevens played by Michael Jordan. Damn, but that uber-confident swagger of a rapper walking in from backstage onto the resounding cheer of a million fans, that's the cocky confidence he brings onto the screen. He is the bright burning no-holds barred flame to the dull dogmatic idealistic candle of T'Challa's character. I loved his characterization and thought that finally, here was a villain for Marvel comics, who can actually make that menacing sneer into something potent. As his backstory unfolds, we can actually believe in his misplaced zeal to turn the tables on the world and put Wakanda on top and make sure, the sun never sets on this empire.

At the heart of it, Black Panther is yes, a Marvel movie. With its homage to tech-gadgetry and overblown CGI-heavy last-gasp climactic battle-scenes and more. But Black Panther is definitely a new direction for Marvel. It's thought-provoking, absolutely heady in its unflinching deconstruction of the identity politics morass and is wildly entertaining it's alternate Africa setting - complete with horned rhinos, beautiful sunsets and the thumping drums that chills your heart and brings on the goosebumps. This is Marvel like you have never seen before and I guarantee that you will also cross your heart, stomp your feet and croon, Wakanda Forever as the screen-credits come on.
2018 Movies marvel movie review super hero

Unknown said…
Click zmovie watch movies online free. Black Panther (Disney) - $ 1.35 billion: The first black superhero to feature Marvel Studios' own movie has created a big fever at the box office around the globe earlier this year. With a score of 97% on Rotten Tomatoes, this is one of the most beloved superhero movies ever. It should be noted that North American grosses are $ 699.74 million, or $ 30 million higher than the Avengers: Infinity War.