January 02, 2018
Been trying to compile this list of the biggie titles from 2017 books that I missed out reading because, hey life happened :) Of course, the vested interest is that when I next finish a book I know which is the title that I need to read next.

The Stone in the Skull by Elizabeth Bear

Elizabeth Bear is a prolific author - and has always been on my horizon – in fact, I am ashamed that despite being a long time SFF reader, I still haven’t read any of her titles. She’s been steadily churning out some amazing works out there – and last year, I had decided to take the plunge. With The Stone in the Skull touted to be a lush, expansive entry into the Lotus Kingdom saga, showcasing Bear at her best, I think this was one of the biggest misses of 2017 for me. This will be completed in Jan for sure. It’s a promise to myself.

In the meanwhile, this is why I think you should read it.

A heart wrenching story from the POV of a robot, left in the wastelands of Earth, this one’s got rave reviews and is a warped take on survival, albeit from a machine’s point of view. I would love to finish this one and is on top of the pile.

A review that I loved of the book.


Kings of the Wyld by Nicholas Eames 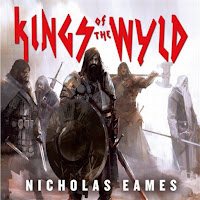 Now this one, everybody raves as the debut of the year – like Expendables in a fantasy world, with prime humor and grit and one helluva of an action adventure romp. I did read a lot of interesting debuts in 2017 but this one got missed out on. But making amends, now I have got my grubby paws on the same.

A rather nice review that should convince you.

The conclusion to N K Jemisin’s award winning masterpiece Broken Earth series came out this year. I am yet to start on The Fifth Season – the book has been gathering dust for a couple of years but the slew of awards have convinced me otherwise. It's not really a common-place occurrence for the same Fantasy author to win Hugo, two years in a row and be all set to sweep up a hat-trick. So I will be reading the first book early this year.

In a year of impressive debuts, Fonda Lee’s Jade City has the vibes of Magic meets Godfather set inside a walled City – with some back room scheming erupting into full scale war, this debut promises to be all sorts of fun. Have bought a copy.

Here's why I think it is going to be exciting.

The Bear and the Nightingale by Katherine Arden

This was a debut that’s been highly acclaimed by everybody who’s read the book. Russian Folklore richly re-imagined, it is definitely a big miss for 2017 for me. But hey – again right up on top of that reading pile.

A really nice review to warm you up.

After New Moon kicked off a trilogy about power struggles between families on the moon colonies, Ian McDonald has taken on GRRM - with his brutal depiction drawing comparisons to the Game of Thrones series. I got both the books last year but didn’t get around to committing myself. With the trilogy ending coming out this spring, I will be devouring this one up.

Well, that rounds up a few of the nicer titles from last year that I never got around to reading.
Happy New Year people! Hoping this year brings in a lot more wonderful books !!
2017 Books