December 28, 2017
So in terms of books read, I think 2017 really wasn't too happening for me. My stats read about 34 books at an average page-length of 330. ( which is just past the half way mark of the goals I set for myself, alas!) Some of it's been graphic novels (Was binge-reading SAGA and absolutely loved it!) and a few non-fiction books thrown in as well. Sadly not a single science-fiction ( Hunger Makes the Wolf is an interesting cross-over between SF and fantasy but doesn't count) But one interesting aspect of my reads this year, is the fact that I seem to have unconsciously focused on "debut" authors and their works. Which basically means, I have missed out on a lot of blockbusters and the big authors' works that released this year. ( Will probably do a post on the Biggies That I Missed out on!)

Brian finished up an extremely satisfying realistic epic fantasy trilogy and then returns back to his amazing world to dig up and give us a blood-drenched shael-blessed back-story to one of the most intriguing and well-loved characters from that trilogy - the assassin Pyrre and her origins. It's an emotionally hefty book that carries the weight of love, loss and death and is just proof, that Brian is writing at the top of his game. We eagerly await his next book, hopefully about another of the side-characters from the first series.

In case you missed it, here's my review of the same: Skullsworn.

Anything that Mark Lawrence touches is pure gold. dipped in the delicious and devilishly beautiful tones of dark and grim. Red Sister introduces to the grim and brutally cruel world of Nona, a young orphan taken into an orphanage/sisterhood and introduced to the way of the arms - vowing to protect her sisters.  I do feel that this could be Mark’s most defining work yet. The world is limitless and there are so many threads that he can explore. The story of the Red Sister is just getting started – and with the series starter shaking things up quite a bit, the legion of Mark Lawrence’s fans are only set to grow further. Grey Sister is out early next year!

Here's my review of Red Sister

Incidentally, I read two books by Sebastien De Castell this year (The second one being his YA called Spellsinger, another super fun book!) and both had his trademark wit and that thrilling sense of adventure that marks his books. I was sad to finally part with our lovable rogues, the swashbuckling trio of Falcio, Kest and Brasti as they race against time to uphold their king's laws one last time and put the rightful heir back on throne. These books have been refreshingly original and an absolute blast - will miss these guys.

This one, despite being a debut - has all the markings of a mature assured writer, the hallmarks of a great author. Ed's debut breathes fresh life in to the grim-dark sub genre and surprised me by the depth of the well thought out plot, magic system, the cast of anti-heroic characters and the top notch world building.

Read my review of Blackwing 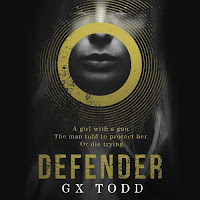 This one's another surprise winner for me - a slightly under-appreciated take on the post-apocalyptic world. I am a sucker for this concept and well-done ( Think The Road or The Passage) can be such a pleasure to read. Intense and compelling rendition of human survival in the pits of a desolate ravaged earth. Defender is imminently readable, a page-turner and the lead characters are a pleasure to be with. All in all, a refreshing debut that showcases a masterclass in the making, GX Todd's Voices series is a thrill-ride cleaving straight through dystopia and haunting voices inside your heard. It's a terrific read and deserves all the love.

Here's my review of Defender.

Other notable debuts that I loved : The grim-dark  Court of Broken Knives by Anna Smith Spark and the rollicking fun-ride of Troll gone crazy in Cold Counsel by Chris Sharp.

That rounds off 2017 for me - Will call out those biggies that I wanted to read but never got around to.
Best of 2017 Book Review