October 22, 2017
2017 seems to be the year of debuts – for epic fantasy. First it was the excellent Court of Broken Knives by Anna Smith Spark, vying hard to fit into the title of her own twitter handle, @LadyGrimDark – then I happened to fall in love with the lush and beautiful East Asian inspired epic fantasy Tiger’s Daughter by Arsenault K Rivera. I am going to go back and finish Anna Stephen’s gripping debut in Godblind as well. 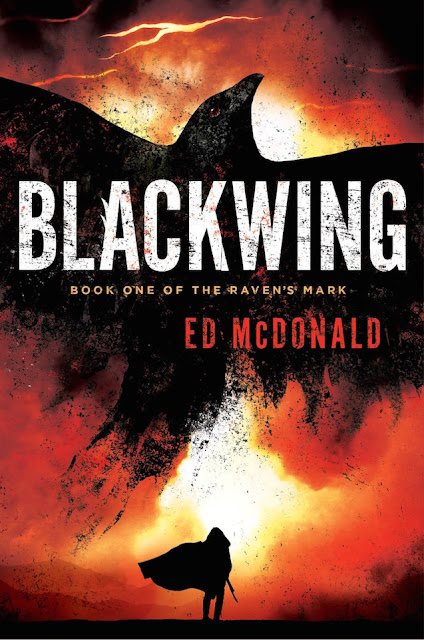 And then Blackwing happened. Ed McDonald’s debut infuses new life into the fading genre of grim-dark. But regardless of the grim-dark tag, this is accomplished debut that goes far beyond. Blackwing is suitably gritty – flush with shocking violence, the tone and treatment is dark enough and there is a lot of black humour for it to qualify as grim-dark. But Ed’s top notch writing is what truly elevates this one above the pile of ordinary. Very clever turns of phrases that hits you square between your eyes– and of course, the excellent world building and a pacey tightrope narrative. His magic system is also pretty unique and then he goes on to pepper this dark tale with monsters galore – giving us truly a winner of a grim adventure – a compelling tale of love, sacrifices and loss.

At first sight, Captain Ryhart Galharrow is your typical “Logen Ninefingers”-style foul-mouthed war veteran, down on his luck with a shady past; A brutally cold blooded mercenary who only cares about his payments and strives to find the bottom of his next bottle and the only hope he harbours is that he would be waking up the next day, alive. He doesn’t really consider too many folks his friends but Nnen and Tnota, by virtue of having ‘suffered’ alongside him for too many missions gone wrong, are close confidantes. They are entrusted by the Dukes and Princes within the Republic to keep the sedition from spreading – to flush out the rebels who spout the religious faith of the Deep Kings from the Empire. Now the war between God-like beings called Nameless, who are powerful wizards and wielders of magic – and the Deep Kings have been raging on for eons. Humans are like ants to them, caught between a stomping match of the giants. And after ages of this endless war, the world has come into an uneasy truce – when Crowfoot, one of the Nameless – unleashes magical destruction that leaves the sky scarred and bruised in a riot of colours. It rends the earth, to form this magical Grand Canyon where animals and all other beings are twisted and mangled under the influence of constant magic leaking out of the earth – a lonely God forsaken place best avoided.

Ryhart though, harbours a secret – he is Blackwing, an elite set of soldiers who serve Crowfoot, one of the only two Nameless remaining and is duty bound to follow his orders. The orders spout forth gruesomely enough – in the form of a bloody raven that rips out of a tattoo on his hand to deliver the message, in fact Ed sets the bloody overtones right in the beginning where we witness Ryhart get his orders from the Nameless. This time, the mission is to extract and protect a Light Spinner (Humans, endowed with the magic closely related to the light) called Ezabeth Tanza. Now we know Tanza is special right from the start – if she has to command the Nameless’ attention. Ryhart and Tanza have history – a forgotten youth, drenched in the colours of summer and love but they both are scarred individuals trying to run from their past. And their present quandary is a much greater peril at hand: A magical machine called Nall’s Engine, created by one of the dead Nameless, is the only thing that protects the outlying city of Valengrad from being over-run by the Deep Kings and their armies coming in across the Misery. But Tanza and Galharrow have to get this Engine to work – with or without the help of the green army recruits, the shifty Princes and the untrustworthy Marshalls. Time’s running out and the Deep King’s army is amassing in force right outside the fort walls.

Well, I know that’s a lot to follow. But how Ed lets his story unspool without letting us get muddled up, is credit to his virtuoso writing. The world is vast, with a violent history and is poised on the edge of destruction. But this crazy, hard-edged universe for the reader, is restricted to the city of Valengrad and also the bleeding edge of the world, the Misery. Both these places come alive in Ed’s amazing verse but I was left a wee bit disappointed that we didn’t get to see the rest of the world, in the far west where the protagonists keep dreaming of escaping to or the  Empire of Dhojaran, under the Mad Kings and the other places

Captain Ryhart Galharrow is not Logen Nine-fingers. But from the start of the story where he is just another brusque mercenary who gives the world a middle finger and only cares about paying back the debt he owes certain ‘unsavoury’ characters, by the end of the story, he is a much changed man. The layers to his characters comes unwrapped, chapter after chapter as we get a peek beneath that tough exterior into the heart of the man who is bitter and scarred by the hands dealt out to him by the uncaring world. His complex relationship with Ezabeth Tanza is also the highlight of the book. Not quite a romance but something more deeper and more meaningful as these two get together to save a world beyond redemption and care. We see the events through Ryhart’s POV but Tanza is also a sparkling individual. Spunky and gutsy to the core, a brilliant Spinner with more talent than the world has seen. She believes in a cause higher than herself and would go tooth and nail up against anyone to achieve her just goals.  Having come a long way from the sweet sixteen year old that Ryhart knew ages ago, a girl scarred both physically and mentally – she’s a fighter and I absolutely was nuts about her.

There are a few side characters who shine too – Nnen, chiefly among them. A ferocious warrior who’s Ryhart’s companion and confidante for long. And then there is the Iron Goat, a legendary general marshall whom even the Deep Kings fear and Prince Herono, another legend who has escaped the clutches of the Kings from beyond Misery.

Overall, Blackwing really surprised me by its depth – of the plot and the wonderful characters and a world so unforgiving and brutal. It sure infuses life into the staid gimdark genre but I think just as an standalone addition to genre of epic fantasy, Blackwing is a winner. And Ed McDonald for sure, is a worthy addition to that growing pantheon of author-gods whom I will worship. Raven's mark is a series worth its weight in salt, iron and gold.