September 10, 2017
Nivin Pauly is definitely the star of today in the Kerala film industry–having cemented his place in the hearts of malayalis world over with that love-story of his that came a year back, a movie called Premam that went on to break all sorts of records. He went on to do different interesting movies post that, many of them out and out blockbuster superhits. His choice of roles have been fascinating, to say the least. And now he turns his hands to production: the man’s legacy is growing and he is determined to leave his mark on our moviedom.

Njandukalude Naatil Oridavela, that literally translates to Interval in the land of crabs, is a quirky and ingenious title, in my opinion. There’s a beautiful sound to it – and Hell, it’s such an evocative term. The land of crabs? I have to watch this one, I thought. For me the trigger was just a song – I know I’ve got it wrong before going to watch a movie, purely on basis of the songs. [Jacobinte Swargarajyam had three amazing songs that had no correlation to the story in the movie!] But the song was vintage Nivin Pauly – playing the lovestruck fool to the hilt.

So a week after the Onam release, I caught the movie this Friday – and what a brilliant concept! Njandukalude Naatil Oridevala is one of the smartest movies I have seen, that deals with the sensitive topic of Cancer. Without giving too much away, the story revolves around the Chacko family that deals with the news of the mother, Sheela Chacko being diagnosed with breast cancer. How the family rallies around her to give her the support she needs during this difficult phase, each of them in their own dysfunctional manner getting over their own fears and distastes to bridge together the circle and complete it. 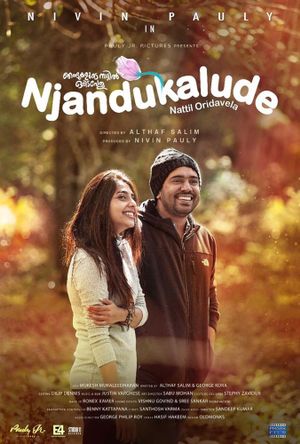 It is a lighthearted comedy with some superb timing from all the artists – led from the front by Nivin Pauly ably supported by Lal and others. Director Althaf Salim, take a bow for having handled this topic with such aplomb and ease. It’s a reflection on life – most of us have gone through these hard times when a loved one has suffered a grave set back in life and we need to rev them up, keep our flagging spirits high and keep our own morbid fears and doubts in check. This movie is yet another unconventional, experimental venture in the Malayalam film industry – heralding the new wave. In terms of tenor and treatment, it hits the same notes as some of the quirky but stupendously successful movies like Maheshinte Prathikaram etc.

It marks the return to the silver screen for renowned actress Shanthi Krishna, after a long break. She wows the audience playing the plucky and resolute mother – who has to unintentionally perk up her family all the while expecting their support while dealing with such a shattering news and coping with life through the rounds of chemo and medicines. Nivin Pauly is clearly enjoying himself in this role – playing the proverbial darling son – the middle one between two sisters, who has returned from London, expecting that his daddy and mummy would be fixing his “K for Kalyanam”.So Kurien is slightly under-confident, racked with insecurity and is a spoilt brat to the core, who loves his Lays chips and doesn’t care two hoots about what it does to his expanding waistline. His comic timing and expressions are priceless. Hats off to Nivin the actor who has relegated Nivin the Star to the sidelines. He sticks to the script and doesn’t let any star-burst-histrionics mar the screenplay at all. S V Krishna Shankar, his friend from Premam, comes back to play the exact same role and again manages to keep us in splits – so does Sharafudeen in a brief role. Lal is in his usual elements, a husband who cannot handle any crisis and is clueless about a life that is not regulated by the briskly efficient wife of his.

There is a sweet simplicity to the Njandukalude..., about how a regular slice of life can be so engaging. There is no melodrama here but the effortless wit in the small regular day to day life events keeps the narrative brimming. The background score by Justin Varghese is good and there’s this one song that is eminently 'hummable'. This one’s a winner all the way – debutante Althaf Salim is one for the big league for sure. You should stop by this Land of Crabs and not just for a small interval.
2017 Movies movie review Nivin Pauly

Jj said…
Hi!Would you be able to tell me if there is an offical copy of the background score where the scene is of Nivin getting to know that his mother is being taken to hospital?This is after her chemo op. It is a beautiful score.
March 1, 2018 at 6:05 AM