September 05, 2017
Dark Tower by Stephen King still remains my all-time favorite fantasy novels that is accessible and still remains intriguing, is a running social diatribe and blends in elements of western, horror and fantasy skilfully. It’s obviously the story-telling capabilities of the master that sells the story to you – of Roland the lone Gunslinger fighting for what is left of everything good in this world – connected to the Mid-World through the Beams of power. It is a spellbinding narrative and it held me rapt for several years in my younger days – my favorite of course is, Book Four: Wizard and Glass, which take us back to Roland’s younger days. The kinship, the reckless love-story, the daring adventures – all of this crafted in King’s supremely non-parallel voice. In fact, this seven book series was one of the chief reasons I started writing, in the first place.

And okay now that I’ve established how much I love love love these books, let’s talk about the movie ...that ruined it all. In fact, no I am not going to talk about it in so much detail. I thought it was lackluster and absolutely, grind-to-a-halt boring in terms of the pacing and the action was blurred, fuzzy and terribly non-inventive.

Idris Elba as the Gunslinger was an excellent choice thought I, when the movie went on the production floors. I love Idris: He is just the right mix of brood and action, extremely talented to pull off such a dark role – that of a man, grim and haunted by his past. The troubled Roland of Gilead whose nightmares from when he lost his entire family to the Man in Black are a constant companion throughout his adult weary life spent in the need to avenge himself by the death of his nemesis and old ‘friend’ Walter, one who traces his line from Arthur of Eld, one of the first kings in Mid-World. Pair him opposite one of the best actors we have today in Showbiz in Mathew McConaughey playing Walter, the Man in Black; I really thought nothing could go wrong.

Oh how wrong was I.

The movie starts with an extremely confusing premise: dream sequences of Jake Chambers – Jake, if you have read the book, is the boy who goes onto be Roland’s adopted son. Modern day where Jake is a troubled teenager focused on living life right even as episodes of violence dot his young adult life. His mom and his step-father put it down to emotional disturbances after his father, his hero – died in a tragic fire-accident trying to rescue people.  But it soon becomes evident to long-time fans that his dreams are manifestations of the Mid-World, the GunSlinger and the Man in Black. Fed up, the step-father tries to get him admitted to a pysch-eval ward at a far off clinic for the weekend but Jake sees the people who come to whisk him off as what they really are. Servants of the ‘Crimson King’ (All hail the King – again some obscure graffiti on the walls referring to the mega-villain doesn’t make it very clear in the movies about that character.) Shape-shifters with false skin. After a daring roof-top/street-side chase sequence, he escapes.

To where? Mid World! Through one of the portals in an abandoned alley-way after having destroyed a “house-spirit” that tries to prevent this entry. Jake then joins up with this disgruntled, extremely dour-faced man slinging two mammoth pistols. (The twin guns of Roland, revered objects that Roland treasures handed down from his father are disappointingly normal!) But then again, you have got to give it to the man. Something about Idris just lights up the screen. There is his irrepressible charm and magnetism that keeps us riveted to the screen – though his introduction was disappointingly pedestrian ( A scene that is pivotal to the storyline in this movie where he loses his father, played by Dennis Haysbert to the Man in Black) He plays Roland of the Arthurian Legends well enough but even his solid acting chops cannot keep this movie grounded and interesting enough for us viewers. 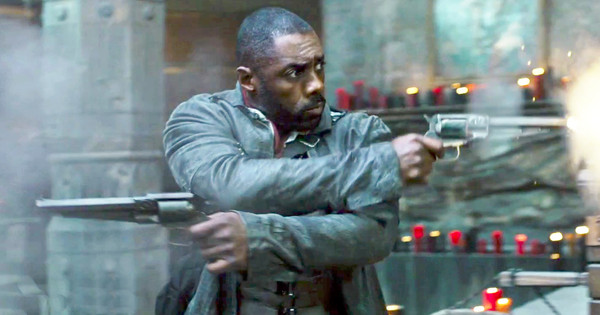 The movie plods along – the absolutely cool things from the world-building of the King novels come out as just mumbo-jumbo nonsense. Shifting between the magical Mid-World of foggy forests, craggy mountains, digital bogey-men and cinematic allusions to Stephen King’s majestic oeuvre – and the boring Keystone Earth (Modern day America where shapeshifting monsters have orgy parties deep in the basements of 5-star hotel kitchens) The story comes out in spurts and expository blurts of uncertain starts and stops. Jake (Tom Taylor trying very gamely to carry the weight of the movie on his young shoulders) is the one who’s got the power of Shine strong in him. And yet, it doesn’t seem enough to thwart the world domination ( or destruction) plans of Walter. Mathew McConaughey comes across as a sleaze-ball, creepy dissolute villain with lazy hand-gestures mouthing, insipid inane lines like ‘stop breathing’.

It only goes onto reaffirm that some works just shouldn’t be brought to the silver screen. Obfuscating to the core, dull and plodding, bad writing and a rhythm that just doesn’t seem to pick up – just like Walter’s mysterious hair-spray that doesn’t seem to add any quirk to his sleazy character, this movie just is a confusing, badly put together effort with foggy CGI and a terrible script to boot.
2017 Movies Dark tower movie review Stephen King