September 07, 2017
Anna Smith Spark's debut has been hailed as the new grimdark blockbuster - and for good reasons. The book definitely has its share of darkness, seething madness, the blood, grit and the gore aplenty. But it would be a shame - and an injustice to possibly just highlight this aspect of well narrated, epic story set in a beautifully realized vast world. And hey - it features dragons! 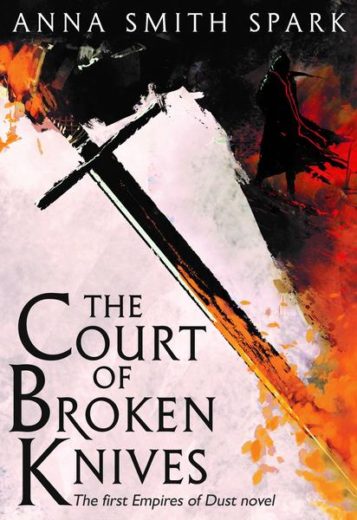 Did that pique your curiosity? It should. Because Anna Smith has the gift of language - and of storytelling, albeit wrapped and twisted in layers of grime and shiny darkness that possibly retracts a bit from the overall heft that the story and narrative aims for. Court of Broken Knives - well, what a lyrical name. The quality of writing is far above debuts we have seen in the recent past and yet, the book is not without its flaws. The pacing falters and certain characters are under utilized but this apparently is just the opening salvo in  a series called Empires of Dust, so we will wait. Because Anna definitely has us spell-bound by this amazing world she's built up.

The story unfolds as a plot to assassinate the Emperor - Lord Emereth or Orhan, for the readers, in the Yellow Empire in the grand city of Sorlost - the seat of power for the Sekemleth Empire that's been hailed as the unconquered and the unconquerable. So Orhan, one of the Royal Families wants to depose the Emperor and usher in a new wave or rule, that would possibly prevent the 'decay' that has been set into the very fabric of life within Sorlost. Towards this purpose, Orhan enlists the help of a mercenary company led by Tobias, a pragmatic man who wouldn't hesitate to exchange his own mother, for a profit and tries to keep his company alive. And yet as he tries to gamely keep his company together, he realizes that his boss - the man who had taken on the contact, has hidden truths from him and the wheels of the conspiracy could be spinning faster than Tobias' sphere of imagination.

We also get acquainted with Marith, a quiet soldier in Tobias' company who's evidently a man with some dark secrets in his past. The very good-looking boy who doesn't look like he could even hold a sword properly and sobs quietly in the night, let alone fight - however, helps save the company in the desert by killing a dragon. And wham! we now know, Marith ain't a simpleton or just a meth addict because there's something compellingly mysterious about him that we want to uncover.

We switch back to the city of Sorlost, right back into the thick of the regicide conspiracy - with Orhan weaving his way through the court, doing that delicate dance with other politicians, Lords with their hands deep in different pies. We are also introduced ( intriguingly in first person narrative) to Thalia, a high priestess in the Temple who's possibly the most powerful person in the Empire after the Emperor. Tasked with bringing light to the world - by a religious order that believes in the sacrifice of living beings, to keep the order in this world.

Through these four characters, we are introduced to this complex, fragmented dark world in a feverish story of human complexities - of men and women, flawed and bitter, seeking redemption for dark deeds, seeking love and surviving betrayal at every turn. It's a violent, remorseless world - full of Gods that are real, malevolent and as bitter as the humans. There is Amrath, the warmongering God who inspires worship of death. The Great Tanis who demands sacrifice of babies. However, what keeps us invested is the story of these four -  each battling their own demons, driven by love, and greed. Their character arcs intersperse and push the story down surprisingly new paths, which constantly amazed me.

Suffice to say that in a regular grimdark novel, the regicide would have been the climax of the book. But in the Court of Broken Knives, we reach this violent dark deed at the halfway mark! And what happens after, is a surprisingly different tale, still thick with darkness powering through to a violent climax.

Marith is clearly the shining star of the novel, a young man deposed of his birth-rights, living with the traces of a violent, blood-thirsty mad God inside him, trying hard to control his addictions and seeking a way out of this mess he's pushed himself into. Built in the mold of a tragic hero, Marith is definitely one of the most complex characters I've read in this genre. While you may not love him, in fact you possibly would be repulsed by some of the acts, there is no doubt about the dark haunting charisma that would draw a reader to a character like him. Thalia, for me was another complex deeply layered character - forced into the ways of a religious order that forced her to kill babies, her character evolution was by far, the most satisfying for me. I won't spoil the surprise here by going into the details but suffice to say that she appears hapless and clueless in the beginning, quickly adjusting her life as the world around her becomes violent and brutal.

Orhan - the politician who set the whole plot rolling, sadly becomes just another figurehead caught up in the manifests of his political ambitions by the end and I wasn't impressed by him at all. Tobias, in any other novel would have been the central character : Ageing commander, tough and pragmatic who is a tool in the hands of politicians and then breaks out of the conspiracy leading his men out. But alas! in the world of the Empires of Dust, Tobias doesn't get to be the heroic savior of the day. It's real and shockingly so. I liked his character a lot though I did feel, there were places where his story was pointless and was faltering.

There are clear traps in the beginning - where Anna, who claims to read and enjoy grim-dark fantasy a lot, goes down the path of Death! Death! Death - flinging the readers right into the middle of blood, gore and grit. But it's a delightful story with layers to it. There are no shining stars though, only the dark reality of living with the consequences of our imperfect stupid decisions. A grimdark novel that checks off all the right things about this genre and goes beyond, to tell a story of real, flawed human beings in brutal dark world, trying to survive.