Signal to Noise by Silvia Morena-Garcia

March 19, 2017
I only picked up Signal to Noise because I had got approved for Silvia Morena Garcia's second book, Certain Dark Things review copy - and when I did a quick search, Signal to Noise surfaced as her debut - highly acclaimed, a literary work with splashes of supernatural magic and copious references to popular music. Intrigued, I went ahead and got myself a copy - but got around to reading it at a stretch only a few days back. Suffice to say that retro Mexico, birthday mix-tapes and vinyl records drew me in, like  a magical spell, not unlike the ones that play out in the book itself; a magic that resided in the musical records that the protagonists of Signal to Noise kept obsessing over. 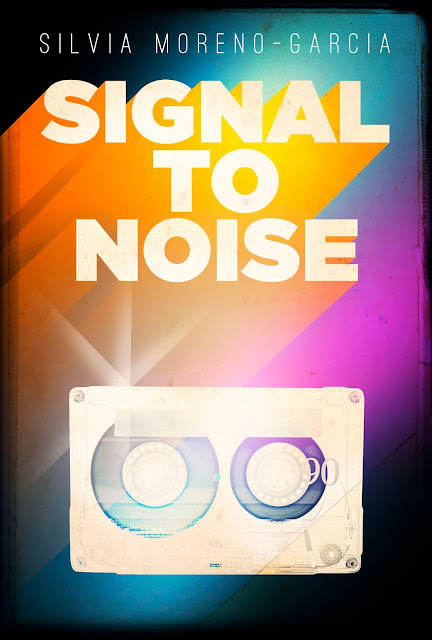 So the story is set in parallel time-lines, 1988/89 and 2009 - ping-pongs back and forth building on the suspense and the emotional resonance - building on the life and times of Meche, Mercedes Vaga who has come back to mexico city to attend her father's funeral in 2009. And being back in that house takes her back twenty years, to her days of thick friendship with Sebastien and Daniela in her school - an almost ostracized trio for their 'uncool' factor by the rest of the snub-nosed kids. Meche is an ungainly fifteen year old obsessed with music and prefers to tune out the world with her Walkman rather than make efforts to blend in with the rest of the world. Her best friend is the equally unhip Sebos, a tall and scrawny boy who likes his literature and draws doodles on his sneakers, a rusty motorcycle his only worldly possession worth speaking about. Daniela, the third person likes to stay in her rose colored dreams of pirates and prefers to baking pies in her Easy-bake over rather than face the real world.

So their drab teenage life suddenly takes a U-turn when they discover the magic of spells, in some of the vinyl records. And Meche, the more adventurous of the three wants to use these spells to reclaim some of the lost ground in school - and their own personal lives, piled sky-high with trouble. But she doesn't heed her grandma's warning that magic will break her heart. It does and how!

In 2009, Meche is back in Mexico, dragged from her cushy programmer job in Oslo, trying to piece together the broken life of her father - who had passed on his love for music to Meche and never really realized his dream of writing that successful novel, instead sinking deeper into his melancholy and drinks. All her buried frustrations boils right back up when Sebastien makes his way back into her life. The parallel storylines feed off each other, slowly building up the tension and the drama in their lives.


Okay, I have to admit! I loved this story. For me, it was a glorious tale of magic, music and twisted unrequited love. Of star crossed love set in a 1980's retro-mexico in the background of awkward teen confusions and some trippy Jazz music on vinyl records. A fascinating tale of growing up, of friendship and deceit with a phenomenal OST playing in the background

Silvia has a solid convincing prose; some beautiful turns of the phrase, truths that cut deep and a nuanced approach to building up her characters - all of them real and compellingly flawed. None more so, than Meche. Silvia gets that teenage drama just right - and paints both her main protagonists in that light. Existential angst, the suffocating need to belong, to be one of the cool kids, the heart aches and the confused emotions.

Let's take Meche: She's downright horrid - selfish, mean and crabby - on the outside and never treats her friends with the respect due but deep down, she's scared of losing her friend and would try and make up to 'Sebos' in her own manner. "She was like a cat, sometimes purring and letting herself be petted, the next showing her claws and biting your hands. She would never, ever, make it easy."
Sebastien, on the other hand, the gawky teenage boy is a lot more sensitive and sensible. However, he's got his own share of problems - and being an extremely stubborn mule, he wouldn't ever give up on his best friend, Meche; perhaps the only friend who "got" him. Their friendship and love is a very beautiful relationship that grows through the book; the easy camaraderie, the bonhomie, the quips and engaging banter, the awkward moments - all of it made the book really shine.

Magic is very subtle and only pays to roll the plot forwards - spells from musical records. The music itself is a critical part of the story, be it the background score or the source of power for the teenagers experimenting their spells or Meche's father's huge collection. But it never gets too gratuitous. A lot of the records were new for me - am hoping someone's compiled all of it at one place!

If you've ever loved music while growing up as a teenager ( I know I was obsessed! but not like Meche) and have had your awkward moments of love, longing and confused emotions, then you will identify with Signal to Noise. If you have experienced those long moments of unreasonable anger and that limbo feeling of being in love and yet not being so, then Signal to Noise will definitely​ be a hot favorite. It's sweet, like candy sure but it's also messy, tangled up and bitter at times. A scratched up Vinyl record that needs to be played right for the soulful melody to mesmerize you. It's poignant, it's graceful and it's about things left unsaid and undone that come back to haunt us later in our lives.

Silvia's debut is a hauntingly powerful story, one that really touched my heart and brought alive the emotional turmoil of our younger days. Five stars!