March 13, 2017
I am a huge fan of mostly anything that comes out from Angry Robot - as I believe they've got it almost right when it comes to talent-spotting. Hunger Makes the Wolf by Alex Wells, was frankly a bit of an odd-ball of a choice for my reading. It's science fiction, mixed in with some goodly measure of low-magic. I don't generally read so much of science fiction in general. Maybe its an injustice that I'm labeling the book so because, really this book is so much more than that. A space-opera that is very accessible in that it's focused on the intense happenings in just one strange off-world planet and relentlessly drives the narrative forward through some delectable characterization and commendable world-building. Corporate politicking, a fantastical magic system and biker-gangs! How can I forget the uber-cool biker-gangs that forms the backbone of this sci-fi thriller and the kickass Hob Ravani, a female lead who along with her best friend Mag plots to bring down the evil mega-corporation that has shackled and taken over this mining planet. 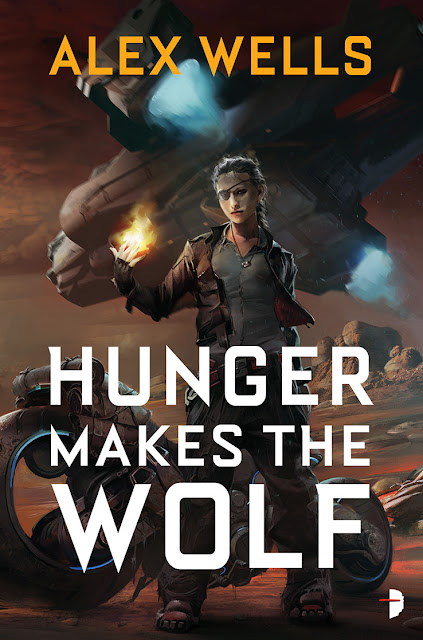 The story at heart, is that of this unrest among the civilians on this strange planet Tanegawa, a tinny spark that catches fire when one of their respected elders, Phil Ravani gets brutally shot down and killed out in the desert - his dead body is discovered by this biker-gang roaming the sands for scavenging supplies, Hob coincidentally being something of a god-daughter to Phil and who is also part of this gang led by Phil's elder brother Nick. The murder mystery gets murkier when the trail leads Hob and gang to the corporation called TransRift who control most of the stakes in this mines on this planet.

In a parallel storyline, Mag - Phil's daughter, gets kidnapped by the TransRift guys and is brought forth to meet these strange folks, known as Weathermen famed across the universe for their ability to navigate and control space-travel through rifts and also maintain systems in inhospitable planets like Tanegawa. Hob rescues Mag from the clutches of the evil Weatherman but she realizes that the plot runs much deeper than just killing Phil or kidnapping Mag.

Enter Bone-Collector, a strange man who roams the deserts and is blessed with magic, borne of the elements found in this planet, who can divine truths about the future and people. Hob in an attempt to understand the strange happenings in this world, joins hands with the Bone Collector. There is history between them and Hob realizes that to unravel this mystery, she would first have to come to terms with the "witchiness" inside of her.

It's a rather twisted plot - and the frenetic pacing is right on the nose, keeping things moving. There is never a dull moment especially when Hob is on the scene. The story is as much about the tinny spark of unrest exploding into a rebellion against the tyranny of greedy corporations as it's about the character evolution of Hob, coming of age and taking on the leadership mantle of this biker-gang. Hob is forced to grow up fast, with the things happening with her and Mag's family.

Hob's character screams rebel-yell at the drop of a hat, is the Enfant terrible with her mentor Nick and is the first to understand the steel behind the soft pudgy exterior of her best friend, Mag. She is a great heroine to get behind of - feisty to the core and crafty in her leadership skills, the perfect foil to the greed and machinations of the evil corporation she's up against. She is ably supported in this mission to thwart the grand corporations by the gentle Mag ( for whom piling up the adversity only stokes her hidden strength ), her second-in-command the wily Coyote ( one of my favorite side-characters, a man whose gleeful exterior hides some nerves of steel!) and her entire biker-gang, and of course the charming and mysterious Bone-Collector.

All the threads are tied up neatly by the end of this first book - but the cinematic action-set pieces and the exciting, edge-of-the-seat thrill-rides featured in this Dune meets Mad Max desert adventure only makes me hungrier for more. For the next outing of the Desert Wolves led by this enigmatic kickass heroine, Hob Ravani and her friends. If you like your science fiction stories, this is one gem of a story you shouldn't miss out on.