March 04, 2017
Cold Counsel by Chris Sharp was a book, that sold itself to me just by that badass cover. It's as wickedly cool as they come - and of course the back-blurb promised me a ripping yarn of Trolls, Elves, Goblins, Witches and their evil magic altering the world engaged in brutal battles. 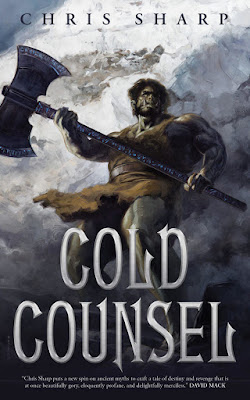 Now these creatures bring in a sense of yearning for the old style of fantasy-writing - where it was truly 'fantastical' and we willingly took frequent leaps of faith, into boiling cauldrons of frothing magic and myth, enjoying the ride, as unbelievable and fanciful as they are. It's the same with Chris Sharp's first book in this series, that follows the adventures of Slud ('Bringer of Trouble'), the last troll left this side of the world, going about a war to reclaim his birthright and perhaps, more. A familiar sense of yearning, a straight-forward classic tale of sword-and-sorcery but wrapped up in newer sensibilities that appeal and exhilarate at the same time, for us readers used to the realistic feel of grit in the such grim and dark worlds.

So the Trolls have been wiped out of this world when ages ago, King of the fearsome Blood Claw Clan took it upon himself to wage war against all other races and take over the Mountain. In return, the elves, goblins and other races joined hands to lead the complete decimation of the trolls. However, one baby troll escaped. Slud who was quietly smuggled away by Agnes, a witch in the Iron Wood. Now Agnes, is no ordinary witch but a powerful one who teaches Slud the survival skills, albeit in a cruel and brutal manner with no show of mercy; preparing him for his 'destiny' - to be king of the mountain and claim his revenge against the world. We encounter the brute, the day that he is deemed worthy of this destiny - when the Rock Clan goblins finally discover the humble abode of the Iron Wood witch. And then as they say, all hell breaks loose.
Except this version of hell looks like a gigantic barbaric troll who brings on fear and destruction with his swaggering gait, daring and pragmatism. He wades down the mountain to deal with the meddlesome goblins, led by the cruel Arok Khan, the huge leader of this clan who is content to drown himself in jugs of ale and bite off the heads of his simpering cronies in the court, forgetting the ways of the old.

Chris Sharp, like others today writing epic fantasy ( Brian Staveley my hot favorite, N K Jemisin, Joe Abercrombie etc) is going down the path of examining the tropes that make up this genre - and re-designing them in his own original fashion. The effect is stunning and makes the book, all sorts of fun to read. Sharp's world is drenched in sensory details - the Iron Wood, the lakes and the Mountain, nature comes really alive in his attention to detail. This essentially is a sage of revenge and so the book is filled with some wickedly mind-blowing action set-pieces. The parts, especially that featured the strange Goblin Neither-Nor perform his aerial acrobatics with his moon-blade knife and pig-sticker, was truly top class!

As we accompany the simple-minded but extremely tenacious Troll on this lifetime adventure, we also meet quite a few interesting characters who make the narrative all more lively and colorful. The chief two who made my read a wholly entertaining experience are Neither-Nor, the goblin blessed with immortality courtesy a magic of the flesh, born of ancient runes etched onto his body and of course, Agnes, the Witch. Neither-Nor brings in the levity to the grim situations, usually drenched in blood and gore of the goblin race. Slud's interactions with Neither-Nor are hilarious - and the grumbling Goblin warrior whose fame is legendary, vents out his frustration in most colorful of languages. Now Agnes is a very interesting character as her character is the one that truly brings in the scope of 'epic' into the narrative. We are given hints of this dystopian world, ravaged by the Ragnarok, terrifying memories capturing the brutal destruction of the world and its Gods through her memories. And the presence of two ravens, a thousand years old, also bring in that sense of mystique to the narrative, telling us that the straightforward tale of good old Slud, might not just be a simplistic tale of revenge after all. Slud himself is a machine, that doesn't deter from his set goals - and in addition to the fearsome warrior that he is, also turns out to be amazingly resourceful.

This colorful world of gigantic trolls, immortal witches and grumbling goblins is a great start to this epic series. Given that Slud has only got started on his saga of revenge, I look forward eagerly to the story of Slud and the Elves now. The Mountain is only the beginning - and Chris Sharp is only getting started. A must-read for all fans of epic fantasy.
2017 Books Book Review Chris Sharp Epic Fantasy tor books