February 20, 2017
Defender is an eminently readable debut - remarkable in it's grey and dismal rendition of a dystopian world where people, hearing voices in their head, have all chosen to end their lives, making Earth a barren desolate landscape. Population is thus scarce in GX Todd's post-tragedy America and so that makes a lone traveler named Pilgrim who rides through this lonely landscape something of a rare breed - doubly so, because he has come to a sort of non-violent agreement with the voice in his head, which he refers to as Voice. 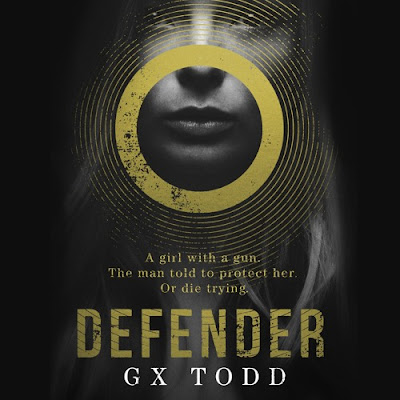 Their squabbles and arguments are colorful and so when the Voice convinces Pilgrim to stop at a roadside lemonade stand, for a teenage girl selling lemonade, Pilgrim just gives in without argument. And even decides to take her on as a passenger. The first human being he has spoken to, in one hundred fifty one days straight. While there is a premonition that warns him against this, he relents anyways and soon discovers, that Lacey - the precocious highly self aware girl, wants to hitch a ride all the way to a little town called Vicksburg in the next state, to reunite with her sister and family. Having lost her grandmother a few years back, Lacey has never stepped beyond her house or the small town she lived in - and so for her, this is the grand adventure she has been waiting for. Instinctively trusting this strong silent stranger to keep her safe and being naive, to the destruction of the world around her or the fact that humans have degraded to the levels of savages, on the brink of survival. This adventure ride soon becomes a edge-of-the-seat thrill-ride for their very lives when both run into this violent gang of survivors, led by a monster of man Charles Dumont who has been rounding up all folks with that 'inner voice' for a sinister purpose.

Defender, as is highly acclaimed by John Conolly and Lee Child, will slot in neatly in that shelf next to Stephen King's The Stand or even McCarthy's The Road. But it stands by itself in terms of the originality and the fresh voice. (pun intended) Todd doesn't waste time exploring or even bothering to explain to the readers, the cause of the apocalypse. Instead she focuses on the 'inner voice' that every body hears and is forced to listen to. The sardonic Voice inside Pilgrim and the interactions (petty squables!) between Pilgrim and Lacey makes for a very entertaining read, helping develop our perspectives of these characters. Pilgrim probably comes across as a trope we've seen before in apocalyptic books; The strong man of few words, much like Clint Eastwood's Man with No Name, walking into a desolate town as the unchallenged new sheriff, a hard-ass yes but one with a heart of gold. A mystery man who holds his cards too close to his heart and the gaps in his memories, add to the unreliable narrative as events unfold like a house of cards, crashing down. Lacey is utterly lovable; her guileless innocence and complete trust in the goodness of the world makes us like her but we know, the world is going to rip apart this veil and toughen her up. There is tremendous growth in her character by the end of book one and we know, she is going to kick some serious ass in this series.

The first and second act of the book, are like jack-rabbits on steroid, leaping past you as pages fly and we are set on this inexplicable collision course with this mystery man called Dumont. Of further interest to us, is this enigmatic Flitting Man, a character we never meet and yet, pulls the strings behind the show of what Dumont and the evil Doc is trying to achieve.

There are no answers in this first book and that, in addition to the long- dragged out but shallow tying up of the climactic struggles in the third act of the book, actually mars the overall reading experience for something that should have been flat out brilliant. The prose is sharp and shiny, the narrative grim and grueling and the characters, that of Pilgrim and Lacey, are real and rounded. The use of the bleak imagery of this world as well as the blunt and shocking violence at times are all well justified in this thrilling debut and I cannot speak enough of the talent that GX Todd brings to this crowded genre.

There are still tons of questions lined up - especially about the Voice(s) and the future looks even grimmer and bleaker with the Flitting Man still at large. All in all, a refreshing debut that showcases a masterclass in the making, GX Todd's Voices series is a thrill-ride cleaving straight through dystopia and haunting voices inside your heard. Definitely one of the best debuts for 2017.