Amanda Hocking has been a publishing sensation - with more-than-a-million-copies sold of her massive hit series, "Trylle trilogy" - and from what I could gather, I definitely think she is a prolific writing machine. Putting out one book after the other in humanly impossible time intervals.
So Freeks came out on Jan 3rd, 2017 and I was lucky enough to have snagged an early copy and be a part of the . Having never read a Hocking book before, I was eager to dive in - and the dry dusty carnival setting in this cold, mysterious town called Caudry really lured me in. 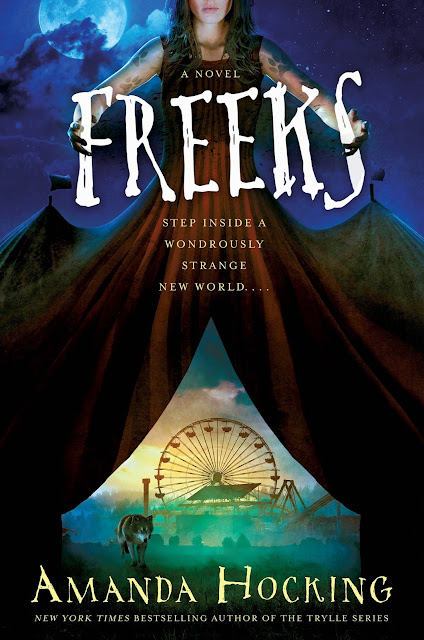 The story is about Mara, a teenager on the cusp of her adulthood, who has been leading the life of a nomad, along with this Travelling Circus group. She lives in a Winnebago trailer along with her mother, who poses as a diviner for the circus but actually is a necromancer who can talk to spirits. In fact, everybody in the group have some paranormal abilities - self-healing, super strength, animal control, pyrokinesis, telekinesis, you name it. Gideon's Travelling Circus has been home to these people with strange abilities whom the society has shunned and cast out. And for this reason, everybody are real close to each other. As the story begins, the group has fallen on pretty hard times and so, when Gideon, the head of this group gets an invite to set up carnival in this small town called Caudry in the middle of nowhere with the promise of good payment, they take up the offer readily and pitch tents outside town.

Mara, a spirited and intelligent young girl, who prefers books to parties decides to explore town - and gets invited for a random birthday party in town on account of having helped out the birthday girl with her drunken oaf of a boyfriend; And here's where she meets Gabe, a brooding handsome young man, to whom she is immediately attracted to. Gabe also happens to be a rich, his family being one of the oldest and most respected in the small town of Caudry. Initial teasing remarks soon give way to confused heady feelings for each other - as the cupid gets stronger with every other 'date' of theirs. Having pitched up the carnival for at least a week, Mara knows this might not last - and she shouldnt get attached to 'townies' but something about Gabe hits her the right way. They try and catch up every other day and the feelings get hot and heavy on both sides.

However, Caudry isn't just another sleepy, swamp-ridden town where the folks would enjoy some magic and tiger tricks. Strange things are happening. Everybody with magical abilities are feeling that something is wrong - their natural abilities are diminished and there's an awful sense of creeping dread that hangs around the circus. And then, one night, the strong-man in the circus gets attacked by a mysterious creature, rending him bloody and on the verge of death. The attacks continue every night leaving Gideon and his troupe frightened, confused and fragmented, on their decision to stay or leave.
Meanwhile, Mara is conflicted with her feelings for this 'boy' - and also, the creeping cold in this strange town has been giving her nightmares that she cannot explain. Tensions escalate as the events tumble towards an explosive climax where Mara has to choose between her 'love' or save her 'family' - the Circus group.

It's a very interesting YA paranormal romance - and is the first of the kind, I'm reading after a long time. I usually steer clear of the "Twilight" books but I had to try out Amanda Hocking after her name frequently surfaced on all things "good and great". I really liked the way the narrative proceeds, setting up the whole circus group and the characters in the group are very well crafted. Mara and Gabe of course are the central points of interest in this 'romantic' story but there are tons of others I grew to like in the course of reading.

Lyanka, the harried middle-aged mother, torn between her visions and her lack of ability to 'care properly' for her teenage daughter, trying her best to be friends with this girl whose hormones drive her decisions. There's Gideon - the leader of the group, a strong-willed fearless leader who sticks to his guns and runs a tight shop when it comes to his circus and who takes responsibility to protect his whole 'family'. There's Roxie, a fireball of a young girl, beautiful and strong who's shaken off the worst of what's happened to her and takes life head-on. Zeke and his two beautiful tigers. These characters really make the circus or the carnival come out real and I think, Amanda's effortless writing puts the shine on it.

Mara comes across as a fearless and intelligent heroine, willing to take the risk to protect those she loves. There are times when I did want to grab her by the shoulders and shake some sense into her as she wandered heedlessly into danger - but overall, she's a very endearing protagonist, admirable for her qualities of being level headed and practical. Gabe, now is the perfect foil, the swoon-worthy, sweet handsome boy who stands by his girlfriend come hell, come highwater. A trope we've come to expect in YA paranormal featuring strong heroines, no complaints though.

The pacing is even and having churned out a few whole completed series by now, Amanda's writing is top notch and keeps you glued to the flying pages. The ominous sense of dread surrounding the mysterious town of Caudry keeps mounting. And this was deftly done without losing steam on how the slow-burn romance also builds up.

I only had one grouch with the whole book; the ending and the central conflict that powers the narrative felt rushed and incomplete. The climax and the way the problems were dealt with seemed overly simplistic - and the reader might feel a bit cheated. But perhaps we will get to see more of both Mara and Gabe as the travelling circus moves on, headed for a new adventure. I for one, am buying ringside tickets for the next show.

And to whet your appetite, here's a sneak-peek -

Beneath that were several smaller signs warning “Enter at your own risk. The creatures inside can be DISTURBING and cause NIGHTMARES.” The entrance to the left was open, but the exit door at the other end was still shut. Wearing a pair of workman’s gloves, Hutch was pulling at the door with all his might. His neon green tank showed that his muscles were flexed and straining in effort. The bandana kept his dark brown hair off his face, but sweat was dripping down his brow. “Let me have a try, Hutch,” Roxie said. “What?” He turned to look back at her. “Door’s stuck.” “I can see that. That’s why I said let me have a try.” “Okay.” Hutch shrugged and stepped back. Hutch’s real name was Donald Hutchence, but nobody ever called him anything but Hutch. He didn’t have any special powers, unless you considered being really agreeable and easygoing a super power, so, like me, he was left doing whatever else needed to be done. Roxie grabbed the door and started pulling on it, and when it didn’t budge, I joined her. “Luka, go and push from the inside,” Roxie commanded through gritted teeth. Both Luka and Hutch went inside, pushing as Roxie and I pulled. And then all at once, the door gave way, and we all fell back on the gravel. I landed on my back, scraping my elbow on the rocks. Roxie made it out unscathed, and Hutch fell painfully on top of me, so he’d avoided injury. Luka crashed right on the gravel, though, and the rocks tore through his jeans and ripped up his knees and the palms of his hands pretty badly. “Do you need me to get a Band- Aid or anything?” Hutch asked as he helped me to my feet. “No, I’ll be okay.” I glanced over at Luka and the blood dripping down his knees. “What about you? Do you want anything?” “Nah. Just give it a few minutes.” Luka waved it off and sat down on the steps leading up to the museum door. No matter how many times I saw it, I couldn’t help but watch. His knee was shredded, with bits of gravel sticking in the skin. Right before my eyes, the bleeding stopped, and the rocks started falling out, as if pushed by his flesh, and the skin grew back, reattaching itself where it had been little mangled flaps. Within a few minutes, Luka’s knee was healed completely.
2017 Books Amanda Hocking Blog Tour Book Review Freeks Paranormal Romance YA