The Jekyll Revelation by Robert Masello

December 29, 2016
Robert Masello has risen up to the top tanks of my must-read authors, who can skillfully interweave historical fiction with mystery and intrigue. I admit to not having read this author before, but that is soon going to be rectified. An enticing mix of history, horror and literary, The Jekyll Revelation by the best-selling author of Einstein Prophecy caps off a good year of reading for me, 2016 and is definitely one of my favorite works this year. 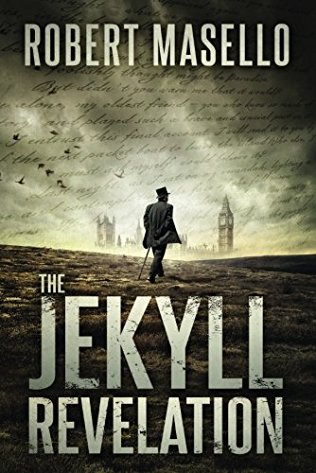 The Jekyll Revelation is a gripping thriller in which Masello takes one of the darkest chapters in the human history, namely the shocking and brutal murders by Jack the Ripper and deftly weaves his creative genius around it to create a riveting tale that imagines the dark evil depths the human mind can fall to. Split as two parallel narratives, one set in the late nineteenth century and the other in modern day, the story weaves these parallel threads together, subtly at first and then through this hair-raising revelation about how terror, dormant across centuries, could rear its ugly head again in the present day.

The story features two main protagonists. The first one being the famous author Robert Louis Stevenson whose journal is what the reader is privy to while in the present day, we follow the adventures of Rafael Salazar, an environmental scientist living in the dry and dusty canyon of Topaganga, California. But I think the main pull of the overall narrative would be the nagging teaser around the identity of the infamous murderer,  Jack the Ripper.

Admittedly, the dark heady days recounted in the famous author's journal is far more gripping than the present day turmoil that Rage goes through. The story begins on a slow note, introducing us to Rafe and his world, confined to tracking a pack of coyotes in the bush, his confused feelings for the bohemian girl whose trailer he has rented and also his run-ins with the gang of no-gooders in that canyon, who torture and kill animals for fun. And the diary begins with the account of Stevenson going to this secret medical rehab to improve his ailing lung condition. While the initial parts set in this snowy small town rehab in the Swiss Alps makes for a very entertaining read, Rafe's life seems pretty drab by comparison.

But things heat up when Rafe on one of his hikes into the wild, discovers a trunk at the bottom of a lake, that reveals to him, this very same diary and a secret elixir. We switch back and forth rapidly between the two narratives, each a punchy revelation in itself, racing to make up that connect between these threads. Nebulous it may seem, till the last few chapters as terrible secrets tumble out of the closet.

I thought it was fascinating as to how Masello recreates the life and times of Stevenson - based on the eerie coincidence that the first murder by Jack the Ripper happened at roughly the same time, the first stage production of Curious case of Dr. Jekyll and Mr. Hyde premiered in London, Masello brings alive the late nineteenth century Europe - from the slippery snow-laden slopes of the Alps where Stevenson saves the life of a grey wolf and in that process, in a strange turn of events, himself gets saved by something from the wolf - to the rainy, dismal alleyways in London, where young unsuspecting women are being preyed upon by this deranged killer. The writing is really solid as Masello nails the deadly atmosphere and the grim mood of the setting; the creepy sense of dread gets under your skin while the whole of London is in the grips of fear and uncertainty. There are some really terrific moments of action in the dark of the night featuring Stevenson himself that had me biting my nails down to stubs. The lightning fast plot however, really doesn't have the same bite when it comes to the story of Rafe.

Does the terror that stalked the streets of London get a new lease of life, in modern day California? The bikers gang and the meth problem doesn't compare well enough to the grungy dirge that plays out in Stevenson's life after he pens down the polarizing novel called Curious case of Dr. Jekyll and Mr. Hyde that charmed and repulsed readers worldwide in equal measure; a novel that may well be a reflection on the human society - daring us to reach into the stygian depths where evil that resides in each of us. The novel would well have worked just as a standalone historical thriller and done well by itself. But the twists and turns keep coming - and that final whopper of a twist will definitely blow your mind. All the elements of a thriller done right, there are a few shallow moments in this book, especially in the present day narrative and characters, not well fleshed out enough. But Rafe holds his own and grows into a compelling character by the end. Full points for the inventive and creative imagination by which Masello has wrought out the Stevenson angle to the Jack the Ripper murders, this definitely is the gripping account that will have you ripping the pages out to get to the end.

A blazing fast read, crammed with some brilliant characters and a compelling dark twister of a plot. Lovers of mystery and historical fiction, anyone who's interested in Jack the Ripper's story, should not miss this one!