December 21, 2016
I have already been crooning about my die-hard love for Blake Crouch - His latest, Dark Matter - a twisted dark pretzel of a delightful science-fiction thriller was the icing on a noteworthy career full of glorious books. I first came across him before Wayward Pines became a TV Series.

And now this - Good Behavior hit the small screens across America on TNT a month back and is raking up the TRP's, purportedly one of the best shows after Southland. I picked up the collection of three novellas after I came across this news but hey, it's a rule now! Anything Blake Crouch, sign me up for the ride baby! This man sure knows how to write a thriller, get your blood pressure roaring and ratcheting up the tension to levels often sharp enough to cut diamonds. 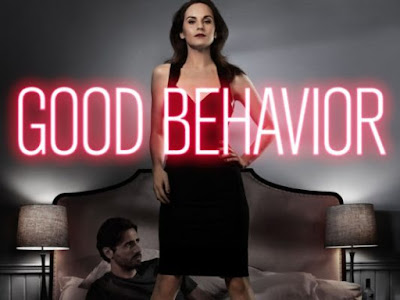 So this one features Letty Dobesh, a thief, a meth-addict and a functioning alcoholic - fresh out of prison and looking to redeem herself. She has a young son, being taken care of by her own mother and probably wants to come clean, for his sake. But she has this one weakness that she cannot really ignore - the impossible high that comes from being on a 'job' that beats everything else. And being great at what she does, she is often sought after by the who's who in that part of the society, regularly hitting her up for one job or the other. The novellas follow three such 'jobs' and the complications that arise.

It's not necessarily in chronological order, the events in the three novellas - but nevertheless, as an introduction to the character of Letty, it does a bang-up job. The first book, is perhaps the grimmest of the three. We find Letty having set herself up in this nice posh hotel, hooked up with the bell-hops and waiters to slip her the master card keys of rooms where she waltzes in and gets out with the goodies in the rooms. Easy pickings. However, this one job - she gets stuck in the room as the occupant walks in and has to scramble into the closet to avoid being caught. The conversation that she overhears however, changes the course of her life. A plot to assassinate this guy's wife - and even Letty, hardened by life-experiences as she is, cannot in good conscience overhear what she does and forget about it. Cold murder is not something that she can condone and sleep easy. Against her own set of rules, she decides to intervene and try to save the said victim's life. What happens next, is a chilling grisly plot of depraved humanity and makes for a grim, tense read.

The second story finds Letty hooked up with one of her favorite 'handlers', Javier - a cold man who sets her up for jobs. This one's an odd request though - a tech CEO who's been convicted by the courts for fraud, living an exiled life on a remote island requests one last night with a beautiful girl. Javier sees the opportunity as an attempt to rob the man of his most valuable painting and Letty seems like the perfect person to execute this one. However, Letty's worst nightmares come true as the plans go topsy-turvy. Deceit, nerve-wracking tension and some edge-of-the-seat action-drama. Brilliant stuff!

The third story, personally for me was the weakest of the lot - and involves an elaborately planned heist of a Las Vegas hotel. and here's where we meet Christian, the third important person in Letty's life, her psychologist. Enough said about this, the plot rolls out like a B-Movie narrative and involves speed-chases, rappelling down skyscrapers and blazing guns.

I loved Letty's character - and if this was to whet our appetite before the show rolls out, then I am hooked. She's smart, sassy, ballsy to the core and still comes across as an endearing character, the underdog down on her luck, vulnerable girl trying her best not to give into her own demons and take life by its cojones. Crouch's writing is, as usual, spot-on. Razor-edged tense thrillers that make the pages fly and keeps you awake long past your sleep-hours. A book you must try, if you like action-thrillers seeped in mind-games and twisted psychological drama that will fuck with your mind. Recommended.
2016 Books Blake Crouch Book Review Letty Dobesh thriller TNT