The Ferryman Institute by Colin Gigl

November 06, 2016
I got The Ferryman Institute a while back and have just been stewing on it - The book came out on Sept 27th, from Gallery (Simon & Schuster) books and if you like your urban fantasy a little offbeat layered on with sides of wicked humor, tons of action and an imagined world like no-where else ( literally hanging between the life and death!) then you should get your hands on this book. 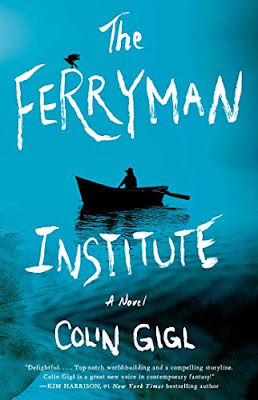 This is Colin Gigl's debut and if this is any indication to go by, then this talented writer's got a long way to go. It reads like an assured piece of writing, whacky and funny to the core and paced really well, I couldn't seem to get enough of the story. Set in a hyper-imaginative setting called The Ferryman's Institute where the residents, simply known as ferrymen are primarily tasked with the onerous job of ferrying the newly dead souls, into the afterlife. And for this, they are 'blessed' with a seemingly immortal life ensuring that they carry on their assigned tasks. The Institute is structured like a modern day corporate company - headed by a "President" whose identity is unknown and the tasks are always completed by a team of three - a Manager, an analyst and the ferryman. Each with their own defined set of job responsibilities. They have their own 'internal affairs' teams and its all presided by a mythical board of directors, whom no one has ever seen or heard from.

So the story unfolds from the POV of Charlie Dawson - Charlie is a ferryman, no - he is THE ferryman having got to a superstar ferryman status having never failed in his job in the last two hundred and fifty years of meritorious unflagging service. But doing the same thing, repeating the same dialogue to millions of souls looking to make that cross-over - can be dull and deadening. And so with Charlie. Who now wants out of it. In fact, Charlie has got so bored with the proceedings that to pass time, Charlie flings himself off cliffs and lands on the rocks and beaches far below. In a way, this scene right at the beginning of the book even as the reader is trying to wrap that idea of an immortal ferryman, between the doors of life and death, is a subtle but powerful imagery that nods towards the disillusionment of Charlie.

That's when he gets a break - and a top secret assignment direct from the President him/herself about this subject called Alice Spiegel, who is about to commit suicide. But surprisingly, Charlie gets a choice. Be a Ferryman or Save the girl. A choice after two hundred fifty years is not something Charlie is going to let go of and this one act - of saving Alice from killing herself, pretty much tears a huge hole in the fabric of reality in Charlie's life. Sort of like that butterfly wing fluttering leading to an earthquake some place else. It sets off an event of chain-reactions that sees Charlie and Alice scrambling for their lives (!) against a determined set of antagonists hell bent on arresting Charlie. It's non stop action from here on and the novel is filled with suspense and thrill-rides with a lot of twists thrown in for good measure.

It's eminently readable as a 'thriller' book - but Colin's ingenuity is in presenting the Ferryman Institute in all its corporate glory, so relatable and alarmingly realistic. The people and their frustrations, their aspirations and jealousy that makes this world what it is. In Charlie Dawson, Colin gives us an empathetic and intelligent protagonist whose pain and longing is something we can all relate to. The author does stretch it in the beginning by painting up this picture of a desolate, frustrated man stuck in a job that he finds meaningless but continues to do so, almost to perfection for over two centuries and many decades. But then Charlie gets to meet Alice - his next 'job' and things get cracking.

Alice is a livewire - one of the reasons I enjoyed the book so much. An intelligent, sassy young woman whose snark and wit protects her vulnerable mind from the hurtful world. The cheerful banter between her and Charlie is very well written and is basically the backbone of the book as we go in further. But things really heat up with the introduction of Inspector Javrouche, an investigator within the Institute who's gunning all out for Charlie. A very well realized antagonist whose reasons are all too believable and the readers really get to believe in his cause. And that is definitely one of the strengths of the book. The characterizations are so pat-down rightfully done. And then there is absolutely delightfully Mr. Cartwright. Ah, you will just love this guy. A sort of distant mentor for Charlie whom Charlie spends time debating about 'life', the history of the Institute and the rules that govern this strange in-between place. And he's got more hidden away in his pockets than the whole world outside.

The bureaucracy and the meta-physics of the world of the Ferryman institute is well fleshed out and Colin's writing is first-class, engaging and spot-on with his witticisms and pointers about truths of life or death as it comes. If you are bored with the whole genre of urban fantasy in general, then this book about the "undead" infuses new life into such. It's a delightful caper, wickedly funny tale about the stasis of after-life, so to speak. With wonderfully realistic characters drawn up and a well-realized bureaucratic institute that doubles up as the most successful and original 'soul-processing behemoth' that Death himself has chosen to outsource his job to, The Ferryman Institute is a winsome novel about the choices you make in life - and death that defines you as a person. I cannot recommend enough of this one. Go ahead, grab yourself a copy.
2016 Books Book Review Colin Gigl Urban Fantasy