The Burning Isle by Will Panzo

November 10, 2016
Another debut hailed by the marketing engines to be the contender for the Best of 2016-lists, but this time, I do believe that Will Panzo's excellent grim-dark debut, The Burning isle might just stand against the ravages of time and more. 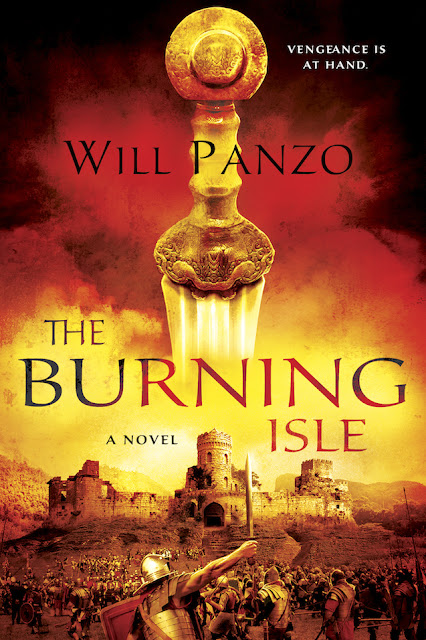 A solid, entertaining first book, soaked in grime and blood that details a tale steeped in magic, mysticism and dark intrigue about this mysterious young mage who arrives on this island-state of Scipio - at the arse-end of the republic, neglected by all except for the blood-thirsty, merciless ganglords at each others' throats for supremacy. Why is he here, a land forgotten by one and all, forms the crux of the bloody narrative that leaps and skittles forward, in gory skirmishes and numerous fights between spell-casters and wizards ending in smoked up charred ruins. It's by all means, a memorable debut with Will staking his blood-drenched authoritative claim to the crown of the grim-dark fantasy fiction ( Which of course today, is hotly contested for!)

Having said all that, as soon as I finished this frenetically charged book, I found myself a bit lost and underwhelmed. I think the chief reason would be my lack of empathy for all the characters - especially Cassius, the young mage central to the storyline who holds the nuts and bolts of the narrative together, driving it forward with his intense focus on a goal that nobody really understands, until the end of the book. So there are only three reasons for a man being anywhere: to right a wrong, to earn a coin, or because he is lost. We know Cassius isn't lost - his initial conversation with Lucian, the bar-tender immediately draws in the reader and sets the tone for the mystery to unfold over the course of the violent and turbulent story. (Oh and the book is full of some wonderful memorable quotes, be it war, violence or just the minds of men! Loved them)

Cassius takes up the job of a mercenary spell-caster but ends up in trouble soon enough in his first bout, having killed a prime spell-caster or killer for one of the top bosses in town. Which naturally brings him to the attention of the second gang-lord who presses him into his own gang, for some nasty work. Things take on a feverish pace as Cassius works towards his own secret agenda and the trail of bloodied, charred bodies starts to pile up sky-high.

Cassius, fascinated by the legend of Attus, something of a hero-cult-figure in his mind based on the stories he has heard from his childhood, soon is troubled by the 'loss of innocence" as he tries to set out on this "rightful" work of cleansing evil in this brutal land. The life of a spell-caster is cast in violence and death and it doesn't escape him either. His own true identity gets revealed late in the book and by then, if you are not fatigued by the dead bodies and the guilt that piles on heavy on his young mind, then well congratulations. In many ways, its a heavy undertaking. Not to say, I didn't enjoy the spectacular world building or the uniquely designed magic system steeped in antiquity. The world itself is sort of a secondary world fashioned on Ancient Rome, with it's dresses, people and culture strongly based on such. There are gods, then there are the native versions of such and the stories of heroes from past times. Makes for an interesting mishmash that grows on you as you read on.

There are tons of characters in the book - each grimmer and scarier than the other. Piso and Cinna, the rival ganglords, Quintus the General who lives inside the jungle and is said to control the whole of the city from there, Vorenicus the idealistic honest commander of the legionnaires stationed in the city to maintain peace, Sulla the mercenary out to look after her own interests in this war and lots more. Piso and Cinna are typical brutes, grimdark fantasy tropes, akin to murderous ganglords with their own interests at stake, not too likable or with any speck of honor about them. But Will goes to extra pains to paint up the picture of Vorenicus, the General's upright son who loves peace and is willing to go to any extent to maintain the same. The only man unsullied by the filth and grim of the island-city, still with a semblance of honor and respect for human life.
Quintus himself remains a legendary figure, hidden away from the squabbles of the city, who had once led a fearsome uprising and cleansed the city of the natives, a genocide of horrific proportions - till the last quarter of the book. Sulla was one of my favorite characters, out to look after her own interests, a mercenary with some sort of a heart.

There are some sweeping battle-scenes, action bloody and feverish borne on magic ( Some real cool mind-bending scenes of badassery as spell-casters or killers go about fighting each other, some wild imagination on boosters!) spread through the book. And the magic itself, unexplained to a certain extent is an important ingredient of the whole narrative. Given that Cassius himself is a mage ( and one of the greatest, having been trained on this mysterious Isle of Twelve, a wizard boot-camp bordering on Hell itself!) The timelines overlap and intertwine, giving a very interesting 'graphic-novel' vibe to the reading itself.

Overall, it's a rather enjoyable romp giving us an anti-hero reveling in mystery and ambiguity and a memorable world of astounding magic and killer-mages and dirty battle-fields in it's slum-laden alleyways and dark jungles - A wild read like a kinetic cinematic experience that will leave your heart thrumming for more.
2016 Books Book Review debut Epic Fantasy Will Panzo