November 01, 2016
I watch movies, mainly because of the escape it offers me. Rose tinted dreams away from the bustle of a daily trudge of a real life. But occasionally, I get to watch such gems rooted in dark reality and grim truths that I cannot help but sit up to applaud. 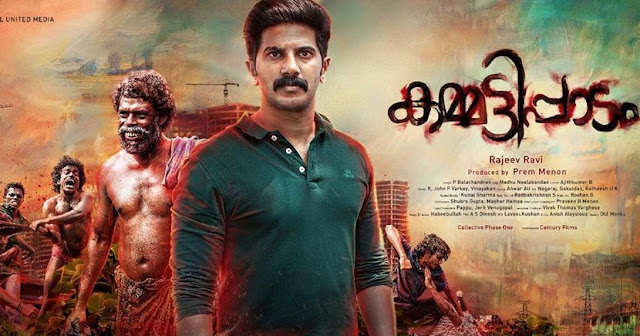 Kammatipaadam was one such movie.

Funnily, I had never really heard of the movie much, except for some of the folk songs in it that seemed to briefly sparkle on the media. Maybe I was living under a rock. All things said and done, Kammatipaadam is an absolutely riveting, gorgeously detailed gangster drama that unfolds slowly, drawing attention to the hidden truths behind the rise of city of Kochi as the real estate haven. A missing-persons mystery, a revenge saga or a chronicle of the unraveling lives of unfortunate youths caught in the bottomless spiral of a life made on violence and blood : The movie is treated at different levels and it works, oh so well at all these levels.

Director Rajeev Ravi's third outing, Kammatipaadam primarily revolves around the life and times of Krishnan, a misguided youth. The narrative is split across three timelines, Krishnan as the ageing mature man, who is injured right at the beginning of the movie, struggling to stay awake.  His empty ramblings are reminiscence of a misspent childhood and misguided youth steeped in a life of crime. Third timeline tries to tie it all together focusing on the mystery of his missing friend, Ganga for whom he has returned from Mumbai. It's stark, raw and unapologetic, in its treatment of the crime-laden violence but its done with a purpose. It's amazing how Rajeev manages to humanize the criminals. But I think, the magic of this movie is how the underlying message that speaks to us about how the city of Kochi was built on the bones and blood of thousands, forced to evacuate their ancestral fields doesn't get lost amidst this tense narrative. From the beautiful green fields of this village called Kammatipaadam where Krishnan grew up, to the bustling metropolis that grows around him as he bikes around the Ernakulam city ( There's a line, when Krishnan the character mouths overhead about how Kochi is no longer a small city - not big as Mumbai but big nevertheless!) to the skyscrapers of Panampally Nagar towards the climax.

So Krishnan and Ganga grow up together as childhood friends - and under the leadership of Ganga's brother, Balan take naturally to a life of crime. Selling movie tickets in black to bootlegging illicit liquor to being henchmen to the business lords of Kochi. But with time, Balan realizes that his masters have slowly been using them to oust his own relatives and ancestors off their properties and fields to raise up their real-estate dreams ( There's this spirited monologue by Balan to his grandfather about how it is futile to hold on to these fields which would no longer produce rice or grain but give way to buildings of glass and steel) But a life of crime never pays and a series of mishaps later, Krishnan and Gang try to reform. And then we cut back to the present where Ganga has gone missing and Krishnan is back in the city of his youth, now unrecognizable with its flyovers and metro rail but still with its seedy underbelly of crime intact.

Dulquer Salman has become experimental with his roles - and this is definitely one of his crowning achievements in his career. A restrained performance, the different looks he dons in the movie including that of the grey-haired mature man are splendid and enough testament to the young man's acting chops. But the standout performances were indeed Manikandan, a fiery debut outing as the temperamental righteous Balan and of course, Vinayakan as the troubled Ganga in one of his most pivotal roles in Malayalam cinema. For Vinayakan, its always been the bit roles of the gangster's side kick but this one's meaty as hell and he does a terrific job in doing justice to it. There is also this understated romantic triangle involving newcomer Shaun Romy and the two leads but in general, I thought the female roles were not too strong.

A tribute to the marginalized communities in Kerala and their struggles, Rajeev Ravi's hard hitting crime thriller ought to be applauded for its daring and realistic approach. Overall, a tad bit long in its three hour reel, Rajeev has not taken any shortcuts in giving us these hard-boiled characters baked by crime and hardship - and in their backdrop, a story of how real-estate is feeding off the blood and tears of unnamed masses, unfolds slowly but effectively. Brilliant piece of movie-making! Hats off.
2016 movies Dulquer Salman malayalam