The Vagrant by Peter Newman

October 03, 2016
So The Vagrant by Peter Newman has been on my TBR - now, for over a year or more. It actually came out last year in May and ever since I read all the initial reviews of this one, I have been itching to get my hands on this one. 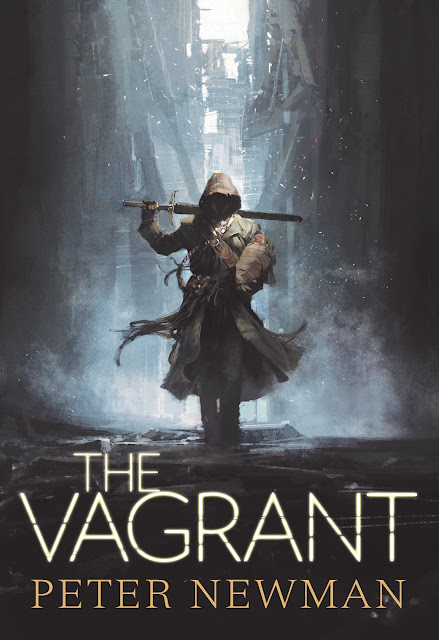 So finally this year, I picked up a paperback version and set down to read it - a few months back. Unfortunately, the e-books on my kindle kept piling up and screaming for my attention; so despite being extremely interested in the initial couple of chapters, this intriguing, new-weird post-apocalyptic mishmash of a knockout story slipped away from my attention. I finally decided I will come back to the story earlier this week but trust me, despite this being a modestly sized fantasy book, the details are overwhelming and pretty dense if you glaze them over. So nope, I had to do a re-read to get my bearings right. And man, am I glad I did this.

So a mute hooded knight, a delightful baby, a super-sword and a stubborn goat traveling across a desolate, war-scarred landscape over-ridden by demonic apparitions towards an unknown location.

I loved Jay Posey's Three. This one drew comparisons to Jay's debut, Peter V Brett's debut ( The Warded Man) and the extraordinarily brilliant Road by Cormac McCarthy - which pretty much raises the level of the book beyond the ordinary. And trust me, this book gets full points for infusing originality into this setting despite the heavyweight comparisons. Peter's writing is spot-on and absolutely top class and keeps you swimming through this lovely, dark land of demoniacal taints, broken technology that is at once, futuristic and nostalgic and a stunning cast of warped and twisted humans, wasting and fighting to stay alive.

So a mute for a protagonist? The Vagrant, the titular character really grounds you in this whole adventure. Mute doesn't matter. Actually, it becomes the strength of the overall narrative. He is part of some order of knights on a mission - and nothing deters him from his goal. Except perhaps, his good heart. We really connect to this character, despite the fact that the author gives us little of his thoughts or real intentions. And this was the biggest draw of the book for me. As I'm obviously getting sucked in deeper to understand who this guy is, is that baby his, what's the deal with that stubborn-as-hell Goat and will this sword save the world from an apocalypse?

Chapters switch back and forth between the historical reveals and the present action. Starting with Eight years ago, till the gap is completely filled and the POV switches firmly back to The Vagrant. The rise of the demons into this technologically advanced world that later leads to the downfall is beautifully chronicled in those flashes of the past - but if not careful, you tend to lose grasp of the larger plot. The demons, or the beings that rise up to take control of the world are many. And their powers are deadly - including mind or will-control. Contact with such, actually leads to 'taint' - or mutation and hence, humanity is a sorry bunch quivering in underground holes or squalid cities under the direct protection of the biggest of such demons.

The world ( or the mutilated, mutant carcass of what was once a beautiful land) is uncertain and extremely dangerous - and so, The Vagrant is frequently involved in spectacular action set pieces that Peter Newman draws out expertly and vividly. Loved the battles but it was the story and the lovable characters who kept me hooked to the end. Some like Harm, the side-kick who becomes another foster-uncle for the baby and Captain Axler, who makes his entry late in the book ( And is the champion warrior for The Goat's cause!) are some of my favorite characters. But I guess, the Baby and The Goat - they are truly the delightful bunch who bring in the much-needed charm and light to this often brooding, dark and dangerous quest. The ending of the book, personally for me was underwhelming and sort of an anticlimax but perhaps, the most logical way to end at least this story.

This book is demanding in its style of storytelling - and the amount of staggering detail in this bleak and war-torn world that the story is set in, is a lot of take in. That is indeed my biggest grouch. The pay offs are lovely though- as the reveal happens in excruciating slowness, so stick with it. There are still questions left to be answered - and Peter does a bang-up job of getting us invested in this demon-infested, plagued universe of his for a longer run. Winged swords, demons who can subjugate you to their wills or harvest bodies to create a super-structured demon-child and lots more! There's a lot to love in this emotionally jarring, dark intense and highly original fantasy novel. You should be reading this book!

And the best part? Second book in this series, Malice is out now !