October 26, 2016
When I was approached for a blog tour of Remember Yesterday, I jumped for the chance. As I had really enjoyed the opening chapter in the series, Forget Tomorrow by Pintip Dunn and along with the rest of the world, was waiting with bated breath about the fate of Callie Stone and the world she was trying to save. 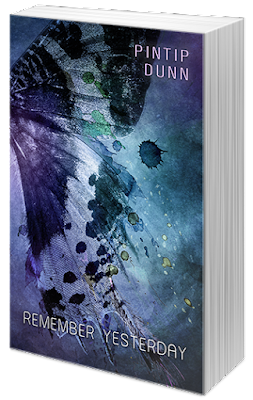 A YA sci-fi with time-travel forming a critical part of the narrative, the first book was definitely a hit with the readers - mainly because of the delightful world built up and also how Pintip chose to portray her heroine, Callie Stone - a strong and level-headed girl, selfless to a fault; her ultimate sacrifice that probably prevents the world from plunging into a disaster. But after that ultimate shocker of an ending, Pintip comes back with an even stronger sequel - raising questions about time-travel with some breezy recap on this world-altering incident. Did it really save the world and her sister Jessa ?

As I plunged back into this familiar, well realized world, set sometime perhaps in our own near future, I thought that a quick brush up of acronyms from book one would have been helpful. FuMA, the now disgraced Future Memory Association tasked with making sure the memories get assigned to people on their designated date. TechRA - Technology Research Agency, working to "re-invent" future memory after Callie's momentous decision and action change the future course of this world. There, that is now out of the way. Trust me, the whole book centers around these two agencies that could define the future of this world.

Right in the beginning, the switch in POV to Jessa, Callie's sister who was all of six in book one, grown up to a rebellious and headstrong sixteen year old  by the second book, is an interesting plot device. So the beginning of the book feels really different from the rock-solid, fun caper that defined book one. We are talking about teenage crushes, rebel yells, the angst and confusion and the hormonal overdrive that defines typical sixteen years going through their transformation stage and a lot of the initial narrative is basically Jessa trying to live beyond the shadow of the legacy that Callie has left behind in this world. Coupled with that are twinges of jealousy and guilt that makes Jessa basically run away from the civilization to join a nomadic group called Harmony - who are the voice of dissent against the tyrannical government agencies.

She forms her most meaningful relationships here in the wild, With Ryder, a boy her age adopted by Mikey (Logan's brother from book-one) who is sort of the head of this rebel group. Now Ryder I thought had great potential, to be this side-kick who teaches all sorts of physical sports to Jessa including neat hover-board tricks. But as the book proceeds, this one goes to the sideline. In favor of the more candy-floss teenage hormone-driven romantic allusion she has with Tanner Callahan, a boy-genius and a scientist working at TechRA.

So put Tanner - the quintessential good looker with the IQ off the charts and a cocky attitude to boot. And Jessa - a punk rebel, headstrong and brash who is desperately trying to find her own purple haven - together, there is bound to be romance. In fact, in this aspect, Pintip does a xerox copy of the love-story that was building up between Logan and Callie from book-one. But somehow, this one really struck a chord with me as a reader. There are plenty of things happening through the book - twisted events that helps answer the questions about the damaged past, beautifully interjecting time-travel into the narrative. The romance builds up naturally even as these events transpire and define their characters in the story.

In fact Remember yesterday is pretty much the motto that Jessa lives by - Callie's sacrifice that rewrote the timelines and the solution to their problems might lie in the past. The breezy second part brings back some "crucial" characters who shape the destiny of this world and I thought this was really very clever.  And while I have to say, I saw the end coming, Pintip's energetic writing still makes this reading all sorts of fun - tying up a lot of threads neatly. The time-travel paradoxes are cleverly handled and the room is left wide open for an interesting climax by the series ender, definitely looking forward to wrap this one up as Jessa and her friends head for one hell of a showdown.

Overall, an extremely strong sequel to a wonderful sci-fi YA series that definitely will be remembered, today and tomorrow.
2016 Books Book Review Pintip Dunn science fiction YA

Anonymous said…
How i got my Husband back Thanks to Lord Alika for bringing back my Husband ,and brought great joy to my family??? My name is Kathryn Louise, My Ex-Husband dumped me two weeks ago after I accused him of seeing someone else and insulting him. I want him back in my life but he refuse to have any contact with me. I was so confuse and don't know what to do, so I reach to the internet for help and I saw a testimony of how a spell caster help people to get their ex back so I contact the spell caster and explain my problem to him and he cast a spell for me and assure me of 48hours that my ex will return to me and to my greatest surprise the third day my ex came knocking on my door and beg for forgiveness. I am so happy that my love is back again and not only that, we are about to get married. Once again thank you Lord Alika , You are truly talented and gifted. Web:http://lordalikaspelltemp8.Wix.Com/http is the only answer. He can be of great help and I will not stop publishing him because he is a wonderful man.Email: lordalikaspelltemple@yahoo.Co.Uk or +19287694882. Web:http://lordalikaspelltemp8.Wix.Com/http
December 5, 2016 at 5:43 AM