August 18, 2016
Cheesy as it sounds, love is the central premise that makes up the core of Dark Matter, the latest by Blake Crouch. Blake shot up to be one of my most-awaited authors, after I had blown through the first two books of the Wayward Pines trilogy, and even pre-ordered The Last Town. The series was the fastest ever that I had read through – the same holds good for his latest, Dark Matter. I blasted through the book in one day! 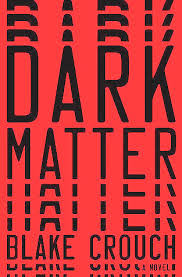 It’s a propulsive definitive thriller with a solid science-fictional conceit at its center, that of multi-dimensional realities and identity crisis. But hark, am getting ahead of myself. So here's the byte-sized version:

Jason Dessen is a mild-mannered local college professor in Chicago who gave up on what could have been a grandiose scientific career with breakthrough research and inventions, all for a happy marriage with his middling successful artist wife, Daniella and has a fifteen year old kid, Charlie. We peek into his almost ‘boring’ life as a chill evening, Jason gets called out to meet up an old Harvard room-mate of his, now a successful scientist who was holding an evening meet up to celebrate his latest achievement, winning the Pavia Prize. However, things take a sinister turn as he’s coming back – a masked intruder (in a white geisha mask) kidnaps Jason and then injects him with something unknown, and just before he passes out, Jason hears the words, are you truly happy. He wakes up to find his world upside down, in a top secret scientific facility, people celebrating his return from a ‘coma’ and that he’s engineered/invented one of the most mind-boggling breakthroughs of his century for the human-kind. The rest of the breakneck narrative focuses on Jason trying to unravel this ‘reality’ as his life gets yanked out from beneath his feet. It gets murkier and finally lends itself to a nail-biting show-down as we sift through the heavy mounds of silt – of ‘alternate dimension realities’ – but never losing steam, as Jason, our protagonists believes in only one thing. To get back to the love of his life – his wife and son.

The plotting is phantasmagorical as we, along with Jason try to break down this into a science problem, sifting through hypotheses with proofs or reject the same. We deal with the problem of ‘identity’ as we as the reader are taken in for a wild ride. A multi-verse concept isn’t novel, almost being a science fiction trope but the way Crouch breaks it down – not treating us to a ‘word-salad’ on quantum mechanics ( The explanation of that fish in a small pool being taken out and confronted with the reality that there are other pools, smaller and bigger!) but respecting the reader’s intelligence, worked for me. Revelations hit us from far left, twists and turns galore. It works at different levels as a thriller as Jason races back to his ‘own’ world to confront his reality. However, apart from Jason – I would have loved to see more of ‘Daniella’ as a character, the core of his existence that drives him. Other characters like Amanda, the psychiatrist at the Velocity laboratories, would have formed interesting side characters but were ultimately sacrificed along the way as Jason’s hunt becomes feverish. The ‘hunt’ sags a bit a bit after the mid-way point and it does become predictable but ultimately, the resolution sit squarely with our perceptions for ‘love triumphs all’, that is a heartfelt and resonant conclusion to this thriller.

A fleet-footed thriller with the liberal sprinkling of science-fiction ‘masala’, this new offering from the Blake factory definitely is a juicy candidate for the big screen. Almost pitch-perfect for it to unfold on large-screen. I absolutely loved it and Blake Crouch retains the top spot for my favourite go-to thriller writers. Full five stars for the top class flighty entertainment fare dished out. This isn't going to be a brainy literal super-book, no. This is just pure fun, a thriller crafted so right with elements of different genres mashed up, that I bet you cannot stop reading this, once you get started. Go ahead, I dare you.
Blake Crouch Dark Matter science fiction thriller