July 16, 2016
Just finished the final episode of Daredevil Season 2 from Netflix. And I am in bit of a dilemma, as to whether I liked it better than the first season or not. After much deliberation with the magic of that brilliant finale fading from my memory, I decide, not. 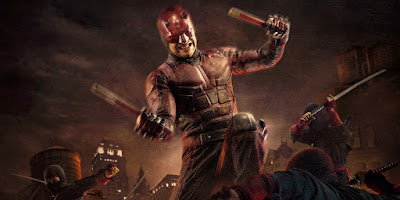 So, the Man who knows no fear, the masked vigilante who's  so in love with his city, Hell's Kitchen of New York is back cleaning up the streets at night, after having put his biggest nemesis, Wilson Fiske behind the bars in that stunning first season - that impressed the shit out of me, as a viewer. In fact, I remember I had binge-watched the same, back to back, night after night and couldn't wait for Season-2. Now, that I am finally done with it, though, I cannot say I feel the same level of breathless, frenetic enthusiasm for the franchise.

This is not to say, that the Season 2 wasn't great. It was more of a see-saw for me - and the giant void left by the exit of Daredevil's biggest villain, Wilson Fiske ( Played, ah so admirably well by Vincent D'Onofrio) is now trying to be filled by two new entrants - the comic-enterprise's much loved/loathed characters of Elecktra and The Punisher, Frank Castle. The season has its moments - some of the terribly slick and claustrophobic and utterly mind-blowing action sequences when it comes to the slug-fest. But here, despite having a crowded character-cast with Punisher and Elektra clamoring for the screen-space along with Daredevil and his older cronies, Karen Page and Foggy Nelson, the episodes don't quite level up to the same intensity and pure adrenaline-rush excitement that I felt for Daredevil's maiden outing.

Yes - he's got his leather outfit done. Yes, he get's new weapons. And yes, Frank Castle (Jon Bernthal in a true-to-form blunt, gruff and maniacally driven role of the ex-marine who turns into the crimelords' worst nightmare in the streets) is as trigger-happy and menacing and brutal in cutting down the goons, as we thought he should be ( this, in complete contrast to the catholic, extremely guilt-ridden Matt Murdoch, who flinches from taking a life that is so against the very principles of his life) - Elektra (Elodie Young, a late entrant in this season, nevertheless lends gravitas and enough mysterious aura to the role of Elektra, the girl with anger issues and no such compunction against outright blood-letting and murder) is kick-ass, exotic and charmingly deadly. And yet, all of this somehow comes up a little short. 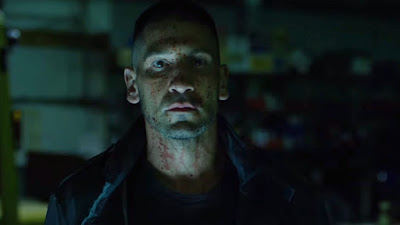 But hey, the show continues to live up to the raised bar it set for itself when it comes to the bone-crunchingly realistic action choreographs, there are several scenes in this one that matches (or tries to), that single-take hallway fight scene pretty early up in the last season. While Frank is content to blow up things sky-high with his guns, just messily exploding heads, cutting a bloody swathe through the criminal fraternity - from a distance with his sniper rifle, Matt joins up with his ex-flame Elektra out in the streets, on star-lit rooftops, in claustrophobic railway tunnels - in beating up the bad guys. And there are just several of them - a sort of cult, known as The Hand that sends armies of trained sword-wielding Ninjas to finish them off. Makes for some amazing hand-to-hand hard-hitting grunt-action that livens up the show to its full glory.

The inherent charisma of the actors still lends shine to the whole franchise. Charlie Cox is just phenomenal. The hurt, the confusion, the vulnerability, the simmering anger and the brooding. It's all still there in his portrayal of the red devil and while upstaged for a bit in the beginning of the season by the heavy introduction of both Bernthal and Elodie, he comes right back into the game by the end. And we're heaving and screaming right behind him in those final scenes, anguish and pain and anger portrayed equally well by Cox.

Karen and Foggy fight their own battles - Karen, played by Deborah Ann Wol switches between a journalist stepping into the empty shoes of Ben Ulrich, the now dead reporter and the legal assistant to Nelson and Murdoch. There are sparks in the middle between her and Matt but the ever murky conspiracies and secrets surrounding Matt's night life quickly douses this out. On Nelson and Murdoch front, there are cracks in the friendship. Matt's conscience does not let him give up his vigilante role when asked by his best friend to do so. Foggy's character has lesser goofy lines and is more mature, Eden Hensen thus losing out trademark wit that defined his character so well. He is relegated to playing the hurt-and-spurned friend who whines about most stuff. The show directors bring back Fiske for a mid-season revival but the excitement is only short-lived. We definitely hope to see more of the charismatic Vincent D'Onofrio soon.

The pacing is a bit off-kilter and the steam is letting off by mid-season when Frank Castle's character has been arrested and is going to be facing trial. The twists and turns of the courtroom drama fail to hold the same level of interest as the slug-fest drama out in the nights of Hell's kitchen. But a new evil arises in Hell's Kitchen, some old enemies resurface and Matt's past comes back to haunt him. The series ends in a very satisfying manner though, with promises of a crackling season three for sure.

There is a lot going on here in the second outing - and not all of it, is balanced and makes for great story-telling. But now, with enough super-heroes in the arsenal, we hope the season-three only takes off to greater heights. The show still has a lot of promise and the intrigue and mystery is built up well enough. While I don't think the show matched the ballyhooed greatness of its maiden outing, Daredevil is still one of my favorite shows ever. Here's to another brooding, punchy powerful outing for the Man who knows no fear. and hey, get Fiske out of that goddamn jail soon!