June 14, 2016
Madeline Ashby is a name I am familiar with, but I've never had the chance to read her mind-boggling and 'compelling' science-fiction books series, Machine Dynasty [ io9 review terms it to be 'the most messed up book about Robot Consciousness'] So when I heard her latest, Company Town is going to be released in May, [The book released on May 17] I jumped in and put in a request. And now, I am a fan for life! 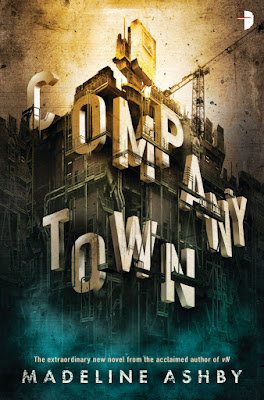 Seriously, Company Town is an engaging, intelligent and extremely accessible, science-fiction thriller set in the near-possible future, an oil-rig company-owned town called New Arcadia off the coast of Canada. Featuring one of the most enigmatic female leads I’ve read in recent times, The Company Town works at different levels as a novel. Starting off sedately in a possible science-fictional set-up, it almost turns the way of a homicide thriller chase as the body count goes up, mixed up with corporate intrigue but ultimately goes back to its core, raising questions about the human nature and our quest for perfection that never ends.

Times are such that everybody is almost a superhuman – enhanced capabilities through implants and medical patches. All that is except for our protagonist, Hwa. Born to Korean parents, Hwa is purely organic – meaning no implants and that is what makes her special. Hwa works as the bodyguard in a unionized sex-worker’s organization – she’s athletic and trained in martial arts and is the perfect choice to be the security detail in this town that is recovering from an oil-rig explosion [ the one incidentally where she lost her own brother ] and is going to be taken over by this new corporation, Lynch ltd.
By a strange twist of fate(or not!) Hwa ends being the bodyguard and self-defense coach for the fifteen-year old Joel Lynch, who is to be the heir to the entire corporate empire – and who is facing death threats, as issued by sentient AI forms from the future, beyond the Singularity. (Yeah, it does get super twisty weird at times!) Hwa’s boss, Daniel Siofra has a soft corner for her and looks out for her most times, but it’s from herself that Hwa probably needed to save herself.

Hwa – a Korean by birth and born with a huge stain on her face, thinks herself to be pretty un-attractive. This low self-worth with respect to her looks, drives her to the gym and martial arts – and this wallowing in self-pity habit, is further brought on because of her mother, Sunny who hates and despises her. Hwa who is never afraid of wearing her emotions on her sleeve, however has this tender moment, intense and sweetly vulnerable later in the book when she is forced to confront her beliefs in this regard. But these episodes of depression and loathing take a back-seat when dead bodies start turning up all over town. Her former union friends, sex workers. And the threat to Joel Lynch couldn’t have been coincidental.

Company Town is storytelling genius – it had me hooked and I was racing to the finish from the time I cracked it open. I honestly admit to having been stumped by that final few chapter revelations around artificial intelligence, time-travel and sentient beings – but Hwa, Joel and Daniel are such amazingly real characters that you have to root for them and stick with the story.

Joel is the genius kid who inspite of the money, remains balanced and level-headed throughout the turmoils of the book. Daniel, on the other hand, Hwa’s boss is the calm, unruffled composed nice-guy you can rely on at all times to go by the book and do the right thing. But there is this fantastic and intense moment later on in the book, where Daniel snaps. And man! It’s like the world’s been flung away from under him and his tender relationship with Hwa takes on a new turn. As a reader, I definitely welcomed it. But Hwa is definitely the best thing about the book. A spitting hell-hath-no-fury-like-Hwa-spurned fireball of a woman who, by virtue of being the last person on that oil-rig who is fully organic and refuses any implants, is the special one. And her handicap ultimately turns out to be her winning hand in this race against a serial killer.

Ultimately, raising more than just a few uncomfortable questions on AI and humanity – especially coming right on the heels of having watched Ex-Machina, the movie – Company Town is storytelling at it's sublime best. I absolutely loved the premise and the wonderful execution by Madeline Ashby. Company Town deserves a lot more attention, it is at the end of the day, a scintillating science-fiction story that is surprisingly tender and humane.
2016 Books Angry Robot Book Review Madeline Ashby science fiction