Waiting on Wednesday: Hope And Red by Jon Skovron

May 17, 2016
In continuation of our wednesday meme ( originally by hosted by Jill over at Breaking the Spine, that spotlights upcoming releases that we're eagerly anticipating.)

And this week, we shine our lights on Hope and Red, an epic fantasy adventure by Jon Skovron touted to be a mix of the Night Angel by Brent Weeks, Scott Lynch’s The Lies of Locke Lamora and the brilliant characterizations of Brandon Sanderson. Does that get your antennas up? It damn well should! 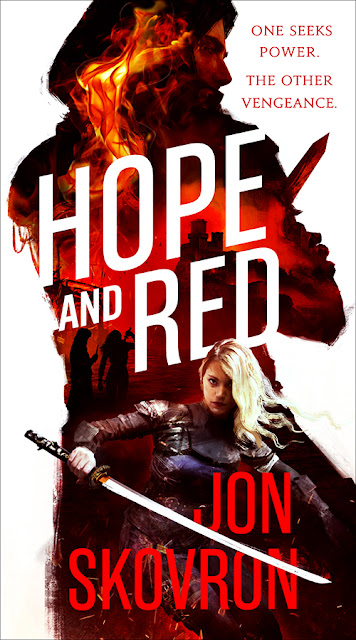 A nameless girl is the lone survivor when her village is massacred by biomancers, mystical servants of the emperor. Named after her lost village, Bleak Hope is secretly trained by a master Vinchen warrior as an instrument of vengeance.

A boy becomes an orphan on the squalid streets of New Laven after drugs and disease take the lives of his bohemian parents. He is adopted by one of the most notorious women of the criminal underworld, given the name Red, and trained as a thief and con artist.

When a ganglord named Deadface Drem strikes a bargain with the biomancers to consolidate and rule all the slums of New Laven, the worlds of Hope and Red come crashing together, and their unlikely alliance takes them further than either could have dreamed possible.

I am super excited by the premise and cannot wait for this action packed fantasy tale to kick off! Will be getting hands on this soon!