May 07, 2016
The jury is still out on whether it's better to be on Team Cap or Team Iron Man - but hey, I am a huge Steven Rogers ( Chris Evans ) fan and will stick by my idol! So yesterday, we caught Captain America: Civil War first day first show - and I put my neck on the line when I say, this must be the most intense, emotionally-draining but nevertheless, spectacular Marvel Comics Universe movie made till date. There, I said it. 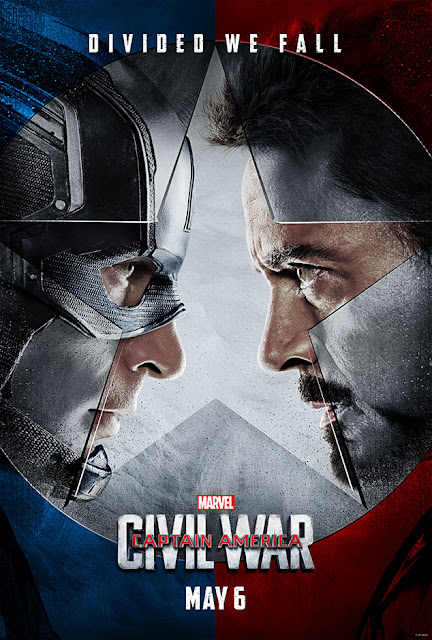 The movie franchise finally tackle the big question of collateral damage to the civilian life as our superheroes are locked in slugfests with aliens, ego-crazed robots and fanatic terrorists - Great Power comes with Great Responsibility ( And hell yeah - this is the like the perfect entry point for that superhero who came up with that maxim, Spiderman, into this franchise!! More on that in just a little while.)

The government factions want to lock down the "vigilantes" who do not "respect the sovereign borders" in their quest to do the "right" thing. After a mission led by Captain America ( one of those mindblowing opening sequences that sets the mood for the blistering frenetic action sequences that follow) in Lagos goes wrong resulting in civilian casualties. Fear and distrust seeds among the general public against the Avengers. And this is in the aftermath of the catastrophic events in Sokovia where Ultron wanted to decimate the living to cleanse the earth. So befittingly named the Sokovia Accord, the UN write up a set of regulations to rein the Avengers.

Which directly splits up the team into two factions: Steve Rogers is wary and naturally doesn't trust the accord which robs them of their right to "choose" - while Tony Stark, surprisingly "uncharacteristically non hyper-verbal" about the whole agreement, decides to sign up so to keep the Avengers alive. As the political maneuverings get to a heated head, a bombing of the UN sessions where the Accord was supposed to be signed, turns things down the road to bonkers-ville . Namely, sighting of a suspect who looks like Bucky Barnes ( Sebastian Stan as The Winter Soldier)

Captain immediately sets off in pursuit to save his friend while Tony is tasked with bringing the suspect in. This forms the basis for a rumbling animosity between the two factions - that slowly seethes up and reaches flash point by the mid of the movie. Unlike previous versions of Marvel movies, this time - there is no clear villain. There are two sides fighting for what they believe to be right. And hence, unlike the confusing mega-slugfest of Batman Versus Superman, this time the people are forced to take sides: for a clear reason that resonates with the audience. The action becomes emotionally charged and downright intense. 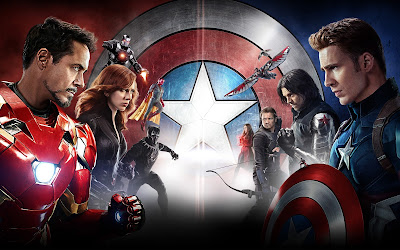 In more ways than one, this movie, Captain America: Civil War embodies the evolution that Marvel movies has gone through - that level of maturity in movie-making its embraced in giving us a movie that sticks true to the original elements like taut storytelling that progresses naturally and on hot-nitro turbo-boosters, building on the fandom and love that audience has built up for the two leading super-heroes over the last few movies and plays it off - making the audience care about the fight and the underlying ideology. The idea of vengeance that will consume everything - and of course, we need to exercise caution and responsibility when it comes to these super-powers.

The second point - is ably demonstrated by a fantastic cameo by Spiderman! Tom Holland plays the teenage coming-of-age Peter Parker, in awe of these Avengers and yet who knows his capabilities and his limits - and willingly accompanies Tony Stark to that fight. The fight ? Oh dear gods come alive, a lovely spectacular squaring-off on an airport tarmac where pretty much everybody on these two opposing teams use their individual superhero abilities to pummel and bash up the other. Punctuated by some really funny verbal gags that lighten up the mood a bit. 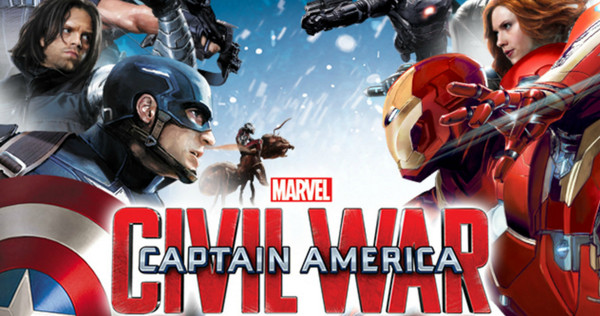 Robert Downey Jr, as Tony Stark is a bit muted and down-plays his usual razor-sharp witty charisma that lights up the screen - a man in pain and still dealing with issues that plague his personal life. Chris Evans is in scintillating form as the man who "believes in people and who for the most parts have not let him down", a leader you would die to follow to the depths of hell and beyond. Chdwick Bose as Black Panther, an african-american superhero from the fictional country of Wakanda was a welcome addition to the mix - a thoughtful, regal and intelligent hero. Anthony Mackie as Sam Wilson/Falcon gets the clever quip-lines and lets it rip - While Scarlett Johanssen, Jeremy Renner, Don Cheadle the Avengers regulars, all play their dutiful parts. Another cameo that is delightful and really puts that goofy comic spin to the serious underplay of heavy emotions that rule the screen is Paul Rudd's Ant-man who is on Team Cap. He is terrific in that bit-role and fully justifies as to why we need another solo outing by this guy.

Overall, this outing from Marvel is definitely much darker and more intense than previous versions with full marks to the director duo Russo brothers ( who had previously helmed the brilliant Winter Soldier) - Character dynamics that sizzle and pop like fireworks, this is the Marvel Movie that works off, not on individual heroics but group dynamism. Yet another manner in which this movie is different is the heart-rending finale - not a super blockbuster showdown but an intimate, personal and emotionally draining sequence that really had me tearing my hair out in frustration and tension.

Easily the best outing we've seen from Captain America and friends - a fitting crown to that trilogy of the First Avenger movies. One I loved the most. The very definition of summer entertainment, don't miss this one.
2016 movies captain america marvel movie review