May 10, 2016
I don't read much of SF. Definitely not the stuck-in-space-survival drama variety. Though I admit, The Martian was a tale I enjoyed. So I surprised myself when I picked up Admiral, the new SF-thriller by Sean Danker from ROC books. 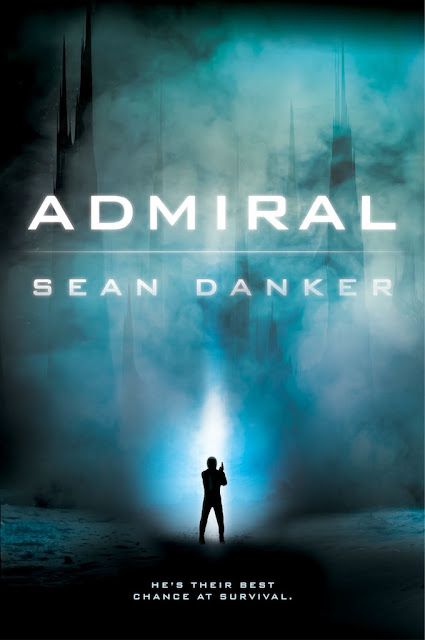 Crashed spaceship on an unknown alien planet and an unreliable narrator who may or may not be who he claims to be - and the creeping sense of dread in the atmosphere ( or the lack thereof!) has just been dialed up all the way past eleven. Bang-up premise huh?

Admiral crash-lands us straight into alien territory ( uncharted planet !!) armed with nothing but our wits, paired up with an "Admiral" ( as is claimed by the sign above his cryosleep quarters and nothing else to verify it with!) and three green recruits straight from the academy. The war between the Empire and the Ganraen Commonwealth is at an uneasy truce and there is enough and more reasons for the recruits to suspect that the Admiral maybe the enemy. But these guys have to work with each other to get out of the sticky situation they are in - namely, an uncharted planet where their spaceship has crash-landed with the pilot(s) dead and possibly, unknown local hostiles.

The drama that unfolds in this first book in the Evagardian series introduces us to the shifty notoriously unreliable character of 'Admiral' in this world torn by this civil war between two different factions that has far-reaching consequences across the galaxy. Sean brutally thrusts  his characters into one sticky situation after the other as they rally around, overcome their misgivings and learn to trust and help each other out. It doesn't help that the first point of view, Admiral, an unreliable narrators at best - never gives away too much of what he is thinking. And of course, the eponymous 'hero' must win the confidence of his irate, tired and highly suspicious team to survive this crash. And to top things off, there is always the doubt that they may not be alone in the ship or the planet.

It's an extremely fast paced novel with one damn thing after the other being thrown at you as a reader. You never really settle in - just the same as the protagonists, groggy with a killer headache after a cryosleep and major trust-issues, you are never truly strapped in for this thrill-ride. For a lot of readers, it probably worked.

Unfortunately for me, Admiral as a narrative voice sadly never clicked. And therein lies the heart of the problems I had with the book. The pacing was fine but the characters never truly grew on me. The closest I came to liking - was Lieutenant Deilani, headstrong and suspicious who never truly lets her suspicions die or lets her guard down. The others, Private Salmagard and the techie Ensign Nils never struck a chord with me. Salmagard comes across as halfway between an ice-princess and a vulnerable girl trying to break stereotypes, her admiration for the "Admiral" and the reason as to why she didn't really 'rat' him out as soon as she sees/recognizes him is anyone's guess. Nils is restricted to the technical revamping of the vessel they are stuck in - and never truly gets any potential to grow. At times, when Admiral explains their "fucked-up" situation to the reader, the book does sound like The Martian. But the voice clearly lacks the chutzpah needed to carry out the odd mix of frustration and hope that should have been underlying the narrative voice. The level of tension never rises above the expected levels and that could have been another undoing of the book. This is a thrill-ride but as a reader, listening to the Admiral dole out info-dumps on the world as ruled by the Empire, the thrill quotient slowly fizzled out. Especially, the ending that seemed very rushed, as if Sean was eager to tie up the threads.

We still have unanswered questions and while this may not be a cliffhanger, the Admiral definitely has a lot more story left to tell. I am in for more but am really hoping that Sean gives us a little more stuff that I can sink my teeth into. Excuse me, while I stalk that guy.