April 05, 2016
Arena is Holly Jennings' debut novel - a Science-Fiction/New Adult story that takes place in 2050 and positions sport-stars, more specifically video-gamers as celebrities in a world that is starved of fame and prefers to gloat over such professional video-gamers who have made it to the top in virtual reality gaming league championships. 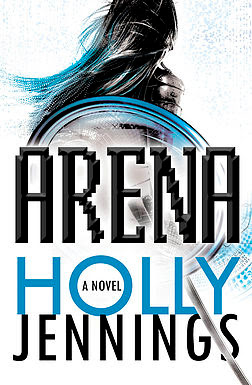 Kali Ling is one such. Half-asian, one of the few female pro-gamers in the top league and at the top of her game, she definitely doesn't have it easy though. But perhaps, racism and sexism is the lesser of the evils that she's had to endure to make it to the top and remain there. There is the ever-present game bosses who need her as the "pin-up" girl for the advertisements and for the gaming leagues to rake in the moolah. And then there is her heart. For ever confused and not able to form any meaningful relationships. Plus there is always the danger of flouncing in with the bottomless supply of drugs and the silent danger of losing herself in the hazy blur between real and virtual if she let's the games dictate her life.

Sound confusing? Let me back up a bit here and lay it out slower. This book, in fact, has a rich vein of narrative that will blast you with its super fast pacing and the non-stop quality of entertainment it oozes out. I in fact finished the book in a couple of sittings. Is that a good thing? Yes and no.

So much of what Holly sets out to do, the book delivers in spades. Make virtual reality gaming cool. and make mega-stars of the gamers [ Hell, most often these guys only have to plug in, do some vicious chopping in a virtual world to give vent to their real life issues and then hop out - to step straight into a jazzy night club and pose for happy pictures together. I mean, what a life!] Give us uber-cool virtual reality competitions. The games themselves are wonderfully detailed - a gladiatorial setting where a free-for-all ensues under idyllic natural settings. Teams of five take on one another and sets about in any random order to kill, hack, snarl or chop. Team with the last man standing wins. A brutal way of enforcing a result and we get to see some grisly mind-bending choreography of sword-fights. ( I wasn't complaining!) We do of course take breaks between these brutal training routines and the gory VR games to deal with smaller issues like drugs and boyfriends.

Kali is a flawed protagonist and her fears and confusion is writ largely due to her age and perhaps easy access to money and fame at her young age. Despite her character arc of redemption, I just couldn't bring myself to like her much. And I must say, the romance! The romance unfortunately, was terrible. Underplayed at times and brash and cringe-worthy at others. In spite of the protagonists being around twenty, the author's treatment makes this whole affair seem pretty young-adult. ( Maybe a good thing for some people?)

The background corruption that roots in because of so much money and fame at young age, the entirely predictable rise of the underdog in the whole tournament and even the lame romance actually made me think the treatment was more shallow than what the book and its premise deserved. Of the world in 2050 other than the gaming-league craze, there is no mention. Except fleeting views of Kali's nerdy genius parents somewhere in California.. Doesn't harbor enough for me to understand the world in 2050, am afraid.

In short, Arena makes for a breezy, light-read delving deep into an all-too realistic make-believe world of glitz and glamour of gaming leagues, teetering breathlessly through some heavy-duty subjects of drug-usage and depression all through the guise of a confused young female lead with mixed origins and an unquenchable streak of ambition that promises to liven up the bloody games in your head. Come right in, for the fantastic gladiator pro-games but be warned that that's all there is to it.
2016 Books Book Review Holly Jennings science fiction