March 14, 2016
The Chronicle of the Unhewn Throne concludes with this stunning third volume, The Last Mortal Bond, bringing to a cataclysmic explosive climax that ties up the individual threads of the three heirs to the Annurian Empire. And with this, I officially declare that Brian Staveley is my all time favorite epic fantasy writer.

No seriously. I MEAN it. I haven't had so much fun reading the last part of a trilogy in a long while. I obviously didn't want the tale to end - and I kept dragging it. But the grim suspense, the bleak horror and the never-ending tales of intrigue and dark twists kept me up night after night. 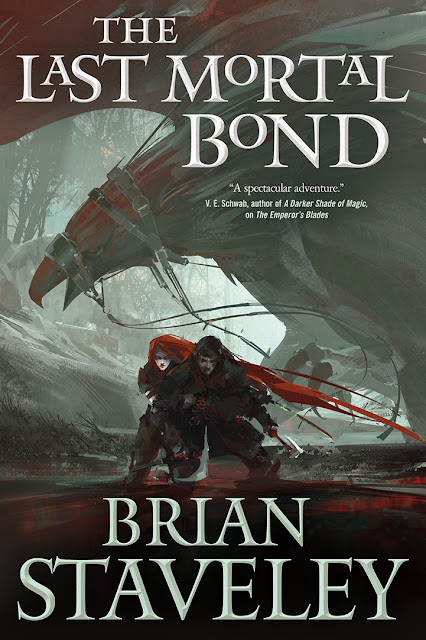 So I was in Malaysia, Borneo Island, holidaying for five days - and everyday I drag myself back to my room after an exhausting day of adventure ( Psst! Read snorkeling, diving, river cruises, waterfall treks!) I still managed to stay up and read the harrowing events unfolding - built like a double helix around each other, twisting and winding up the threads - as each of the three children of the Malkeenian empire move along invisible paths,only to clash together and explode. And all the events that Brian has built up over the last couple of books in the series serve as fodder soaked up in lighter fluid for the extreme fireworks in this one. And mind you, we reach the flash point pretty early itself.

The shocking turn of events at the end of The Providence of Fire left us hanging over a crumbling ledge. The third book picks up roughly about a year after. So Kaden has overthrown his father's empire - and against all odds, has brought together the older nobles in Annur under the umbrella of a Republic while Adare is still out in the North, having declared herself the Emperor and is vainly trying to keep the borders from collapsing under the collective might of the barbarian hordes of the Urghul. Led by a shaman, Long Fist whose battle tactics are too erratic and brilliant for him to be just a normal human. And these attacks are being repelled by an equally brilliant, non-human General for the empire - Ran il Tornja, the wily C'estriim and now Kenarang for the Annurian Empire, who will go to any extent to see the human civilization destroyed. Gwenna, left to be the reluctant leader of the shattered Kettral rebel wing, has to come to terms with the loss of Valyn and needs to decide on her next course of action.

The pieces on the board have been arraying themselves for too long. The munition packets have been planted a long time ago and the fuses are now burning short. It all goes on to become a kent-kissing shael-spawned goat-fuck as it comes together in a spectacular glorious curtains-down with all out war in the Annurian Empire. A war that spawns different forms and shapes. The wild frothy mix includes Gods of Pain and Pleasure, the Ishien bred as warriors with the sole purpose of eradicating the C'estriim, the barbarian hordes of Urghuls, the last remaining Kettrals and their giant war-birds and lots more in the fray. Trust me, it's just amazing that Brian has tried to cram it all into the semblance of a story-plot. Because it could all have gone haywire. But Brian weaves it all together in such an authoritative fashion that the ending leaves you absolutely spent, but in all ways satisfied and happy.

The story is much more violent, darker and chaotic than the first two books - so in that way, it felt like Brian did justice to the fact that this, indeed, was the bloody climax. So taking whatever was introduced over last two books and then cranking up the intensity to a hundred times more on all those fronts - The Last Mortal Bond ends the series in perhaps, one of the most realistic and bleak endings I have seen in a series. That war has its own devastating consequences and it's never all guts and glory. The scope of the story, that was stretched wide open by the end of book two, remains epic and each of the individual storylines merge, blur, come apart at the seams and again converge in a rousing finale that stretches over 100+ pages of a bloody war. The build-up to this war itself is wrought in spine-twisting tension, blistering action set-pieces ( All the parts where Gwenna and her gang come in got me whooping and cheering in delight - She's clearly my hot favorite when it comes to the characterization!) and the suspense grew on me as how Brian was going to wrap this one up. How was he going to tie all this off together satisfactorily.

So Kaden, the emperor-to-be abnegates his rights to the Unhewn Throne but he cannot remain aloof and forever sunken inside his kenta - His denial of the throne sometimes also extends to the larger human-kind as the futility of what he is trying to achieve weighs down on  him throughout his story-arc. While his extreme lack of emotions helps the reader make an objective assessment of the events unfolding, I kept wishing for more color in this guy's life! His uneven relationship with Triste is fully explored in this book and I felt, it has come out really well. One of my favorite off-beat characters, Pyrre makes her appearance again at the fag-end of the book, a welcome return to the chaos that the Skullsworn live for.

Adare is a woman I've come to admire - A character that has grown from strength to strength, from book to book. Now a mother of an infant and also the emperor responsible for the future of the Annurian empire, she's really become this tough nut. Even though beneath the mask, she still is unsure and vulnerable about her choices, she puts up that brave face and sticks through shit and muck to ensure she's being fair. I also adored the side-character of Nira, Councillor to Adare, for her grim outlook and expletive laden advice worth their weight in gold, delivered in her usual acerbic and witty manner.

I will let you guys discover Valyn in this book - though have to say this about him: He clearly was my favorite POV throughout this series - even through the ending, he still remains a favorite. But somewhere in the middle of the third book, I clearly have switched camps to the Gwenna side. She is one hell of a character, unabashed, uncomplicated, straight as a stick and tougher than the toughest meanest bad boy out there ( and that, there are many!) She absolutely doesn't take any prisoners and I love her for the attitude she brings to the fight.

One big reason as to why I LOVED this book, is basically Brian's writing. As a writer myself, this is the one book that has inspired me to go back and get down hard at work on my own writings. His prose is gilt-edged and power-packed. He brings alive the bleak hopeless war and clearly is getting better with every book. Even though this book may have been the longest in terms of pages, there was so much going on with each different character, that the reading felt like flying. He's paced the book well and it hits a an almost feverish note by the last few hundred pages. I cannot really pick on a point that I didn't like. For me, this book  definitely has been one of the best series-endings I have read  and I can lay my ass on the line, that this one is going to be one of the best books in 2016.

So overall, a beautiful and glorious ending to a series achieved in a manner, most gut-wrenching, bleak but realistic and captivating as hell. Brian Staveley has written himself onto that pantheon of "greats" in the fantasy genre - and the Chronicle of the Unhewn Throne will go down as that series which started off by ticking all the right boxes in book one, built and expanded on it's strength giving us an amazing second book but clearly hit the ball right out of the park with this third concluding one.
This is a series that you just shouldn't be missing out on.
2016 Books Best of 2016 Brian Staveley Epic Fantasy