March 02, 2016
I admit I haven't read J C Nelson - famous for his Grimm novel series, his own twist on the fairy tales. So yet again, I dove into a new author - this time, an urban fantasy with zombies thrown in for good measure and came out, absolutely in love with the book and this new author. 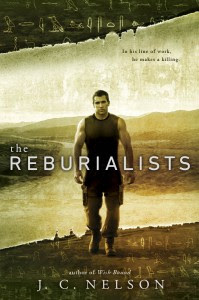 Sometimes when I think about it, this is exactly the reason why I love reviewing/reading books. That indescribably wonderful feeling of having made the right bet - of having discovered a new author whom I will follow to the ends of the earth and beyond - provided he keeps up those precious writing chops! In case of J C Nelson, my bets paid off and am happy to say, that his latest book, Reburialists is a snappy urban fantasy featuring zombies against the backdrop of an elaborate mythology - and really kicks ass - in the action and humor department. A blazing fast read for me - as I was on vacation and hopping planes to get to Borneo and had lots of time to kill on the flights and in between.

So, Reburialists is a nod to the BSI - Bureau of Special Investigations based in America in charge of making sure the dead remain dead. For years now, though, they don't. First set in action by the legendary 'meat-skin' killer, Henreich Carson - BSI now relies on his son, Brynner Carson, the top field agent whose specialty is to break rules without a care, charm women without a care and of course, kill the walking dead in the exact same manner. Until one 'shambler' is found writing ancient spells and 'asking' for Carson by name. This sends the agency on a leather-hunt to nab the "Re-animus" possibly 'remote-controlling' these bodies and who have a personal vendetta against Carson. The 'spells' require somebody with geek-level skills in hieroglyphics and all kinds of scientific temperament - and in comes Grace Roberts, a senior analyst within BSI who probably shares one interest with Carson. Breaking the rules - but is the exact opposite of him in every other way. The trail of the Re-animus leads to startling discoveries - and soon, the story takes a pretty personal spin as it becomes clear there is a lot more behind the facade of the playboy image that Carson has been projecting.

It is here that I started loving the book - it starts off as a regular urban fantasy book pitching Carson as the perfect rake and Grace as the geeky hyper-intelligent heroine. ( well, this was a good twist as usually urban fantasies feature women in skinny tight leather outfits kicking the ass of every supernatural demons, including yes zombies.)  But the tone changes one-quarter of the book as the focus is on the mystery of Brynner's past and how the undead come tumbling out of the closet. The humor and the non-stop action kicks in pretty early, setting the tone for the entire book. And Nelson never really takes his foot off the pedal, as we pick up the trail leading to a very enchanting mythological story as the backdrop and race to the finish.

It's fun, it's outrageous at times and possibly a bit quirky, but Nelson's razor sharp writing carries you through till the ending. There is of course romance - put a hunky, special agent in the room with the geeky & beautiful analyst, there has to be some smoky, heart-melting love-story that leaks out - and funnily, it sort of fits in with the entire book and the plot. Brynner as a character gets fleshed out through the book as the action shifts to his hometown where he grew up with his aunt and uncle after a series of cataclysmic events turn his life upside down. The characters of the aunt and uncle are pretty endearing - and they help build out that back story of Brynner that really makes him into this vulnerable, insecure young man living in the massive shadow of his father's legend that continues to haunt him. Grace is a strong woman character , driven by her own demons ( though this part was a little weaker compared to Brynner's past) - a determined, never-give up resolute young woman out to carve her own slice of the world. The romance was inevitable but Nelson takes his time building it up - using this opportunity to fill out the larger mystery and shape up a lovely mythological history around the mystery of these "Re-animus". I took to both these characters pretty well and I think this is what makes the whole book a winner for me.

Overall, I think this book deserves a lot more time under the sun - a punchy, super-fast read that's got action, romance, humor and the queen of the undead about to stake her claim on the world. I sincerely hope a lot more people would pick up J C Nelson. Reburialists is an exciting new book in the urban fantasy space that is an absolute blast to read.
2016 Books Book Review Urban Fantasy