Guns of Ivrea by Clifford Beal

February 23, 2016
Guns of Ivrea by Clifford Beal promised to be a swashbuckling seafaring fantasy series with mercenaries, mermaids and monks dragged into a war that threatens the land of Valdur. It had all the makings of an explosive read - pirates, political intrigue and lots of action, a nautical epic fantasy series. Just what the doctor ordered. 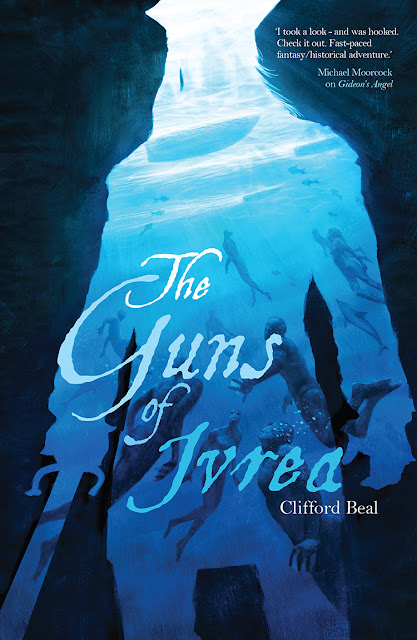 I got an ARC copy from Solaris and was giddy with excitement about the prospects - and dove headlong without too much distractions, meaning I didn't bother to read up the early reviews on the book or give heed much about the plot either.

The initial chapters sucked me in - where in rapid succession, Clifford introduces us to the three main protagonists: Acquel, a former thief turned into a grey robed acolyte, Danamis, a pirate turned King's Admiral and Captain Strykar, a no-nonsense mercenary who only wants to get back to his duke. Each with their own story-arcs and Clifford had managed to up the ante on the tension-levels from get-go. Very soon, the story-arcs entwined ( too soon for my liking! ) and sea-faring adventures take on a darker sinister turn with the overtones of faith gone ugly. Mix in some political intrigue - and the Empire of Valdur was all set to implode under the weight of all this.

So a trip down into the dungeons where the remains of Elded the Lawgiver rests, turns into a nightmare for Acquel when he discovers a terrible secret about their God. Acquel is now hunted by the Priesthood for they don't want the secrets spilling out to the general public - Captain Strykar, who is leading a band of mercenaries stumbles upon Acquel and decides to take him in. Out on the high seas, Danamis is facing treason and mutiny from his own kin as he's been trading with the blasphemous merfolk and people are grumbling about this unnatural partnership. Very soon, the unrest breaks out into full fledged mutiny and he is left with just one ship, a handful of his own sailors and Strykar's company of men who help him escape before the axe falls. The conspiracies continue to entwine and nest down as Danamis realizes the plot may even involve the future of his kingdom. The rest of the story is about he extricates himself out of this hot dripping mess, in the process discovering himself and the loyalty of his whole gang.

Clifford's first foray into epic fantasy is well written, paced evenly and ends with a bang. In the middle however, as he is fleshing out this world - a smitten of renaissance Europe mixed up with the world of seafaring scoundrels - the story for me, seemed to go slightly floundering, bogged down by its own weight. I had no issues with the overall story or the narrative itself but it was the characters that I really failed to get into.

Danamis, the chief protagonist remains an arrogant man who just cannot get out of his vanity to even care for the people dependent on him. Towards the end, there are changes - but he ultimately remains a selfish man who is hard to like. Captain Strykar would have made for a very interesting character but sadly, we see precious little of what drives him.

The monk, Acquel - now that was a character I grew to like. His transformation from the craven man fearing for his life into the righteous monk touched by the hands of fate and doesn't flinch away from his responsibilities, was the highlight of the book for me. His troubled affair with the Widow Timandare however did sour up things a bit, leaving me a bit dry. The female characters, apart from the widow who wants to follow and help the brother so to wash away the sins of her past, didn't really affect the overall narrative. She remains a pawn in the pacy machinations of the political hijinks that leads to some non-stop action thrills throughout the book. That brings us to the other female character, Citala. That beautiful mermaid who has a fascination for the human race. And sadly unlike what the blurb will have you believe, Citala really doesn't get into the story until a bit late. and I think that was a colossal waste of a character arc. Would have loved to see more of the merfolk and their unique culture. The author also sprinkles his tales with dangerous and beautiful creatures of the wild, who lend their own twists to the tale.

Ultimately, the initial intrigue that built up - with the introduction of each character and the overall story-arch binding each one up into an explosive narrative - really was let down by shallow characterization, given up for the pacing and the action. I liked the novel but it could have been soo much more awesome if we had been convinced about the main guys. But considering where the first book ends, I might return to the Tales of Valdur.
2016 Books Book Review Epic Fantasy