February 01, 2016
Perhaps 2016 is the year when I will be fully utilizing the worth of Kindle Unlimited and the treasure trove of great books I can unearth in there! 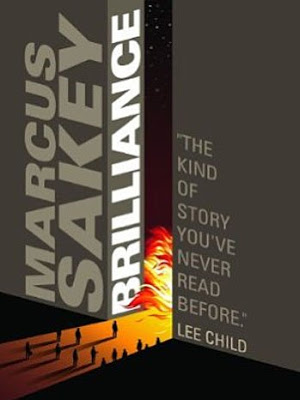 So Brilliance by Markus Sakey was one of such finds. I have not read a good thriller book in ages - mired as I am by this need to plow through my Fantasy to-be-read pile that shows no sign of growing smaller. But this book in a lot many ways, was such a comfort read. Predictable at turns yes, but still a nail-biting thriller written in a grand Hollywood scale with the fate of the world to be decided by a few people kind of premise. This definitely was a winner for me! A good fun read. A mile-a-minute train-wreck of a thriller blending in sci-fi elements of 'gifted' people against the rest of the world ( X-men anyone? Bingo! Similar premise but well, the story runs away on a different track altogether with all stops pulled out and the pedal pressed firmly to the floor!) The first part of a trilogy in Brilliance, Markus known for his razor-sharp thriller writing launches the reader into a full-on heated debate about the disruption as created by a small percentage of gifted individuals known as 'brilliants' who can outsmart and out-think the rest of us, the resulting darkness as spilled over by the need to contain such by certain government agencies and the uncertain future into which such a world is plunged into. It's a book that definitely merits thinking and discussion - but full marks for Markus for having us hanging on to the plot that never stops to take any prisoners and steamrolls full ahead. A novel definitely worthy of being made into a full American "patriotic" movie by Michael Bay and Co. Smirk.

So our protagonist, Nick Cooper is a detective who can "predict" people's actions based on their body language, thereby avoiding sticky situations with his targets. Also known as the "gas" man sent out to neutralize targets as decided by this government agency known as DAR( Department of Analysis and Response, an innocuous name if any for a government agency armed with more jurisdiction and power than Homeland Security, NSA CIA and FBI tied together! Throwing off any suspicions about what it actually might be doing!) From the very first chase on a roof-top - tracking down a computer genius who "dreams of the most beautiful software programs never written" about to unleash a deadly virus that could take down a few hundred men/machines - we are immediately drawn to the character of Nick, A solid reliable man - a family guy with a divorced wife and kids whom he adores - the kind of man whom you want on your side during any kind of an argument and feel good about it. Marcus neatly splits up the narrative into 3 parts - introducing us to Nick, the top guys at the agency - and then part 2 about where Nick goes undercover and part-3 is where the proverbial shit hits the fan as conspiracies tumble out of their hidden depths and everything goes to hell.

The book is pretty clever in it's approach to this big question - what if x-men were true? if they existed among us as ordinary 'looking' mortals, nevertheless with incredible powers to work the stock market and embezzle billions, play the superbowl and be that relentlessly super MVP season after season or maybe just a plain terrorist who is the strategic equivalent of Einstein in our times and has world domination plans. Nick's character is the foil through which the events unfold - and the reaction to such revelations world over would be the same as is presented in the book. Fear, anxiety and confusion worldwide at the discrimination meted out and this atmosphere of uncertainty being expertly ridden by ambitious government hacks to push through their own vested agendas.

The story starts off really well presenting us with this fantastic premise and the plans of the terrorists slowly start to take shape - with the world going up smoke and dust - forcing Nick and his superiors to take up desperate measures. After this, slowly though the narrative devolves into predictable twists and turns - I was slightly bored by the end chapters with the characters getting into playful banter in the face of overwhelming odds just before getting into that showdown. While Nick is the tour-de-force throughout the book, there are other characters like Shannon and Bobby Quinn with his gallows humor that I enjoyed a lot. But what Markus really does well is balance out the non-stop action and the political intrigue and present a thoroughly enjoyable thrill-ride in Brilliance. I won't say this one's brilliant but the book is a sure-fire page-turner and a gripping intense one at that. A cinematic escape set in a believable alternate reality in the near-future of humanity, Markus Sakey hits the bulls-eye with this outing. Brilliance continues with a Better World - and more recently, book-3 Written in Fire just came out. So it's a great time to dip yourself into a stunning world imagined and executed brilliantly by the master of mindful page-turners.
Book Review Brilliance Marcus Sakey thriller