February 10, 2016
I'm a huge fan of Mr. Sanderson - he possibly is the most hard working author in this planet. And the release schedules of Shadows of Self and Bands of Mourning speak for that. Plus he's got a brand new Mistborn Novella out as well this month. Add to that, Calamity (Reckoners # 3) coming out soon enough. Phew! Does this guy even take a break for breathing ? 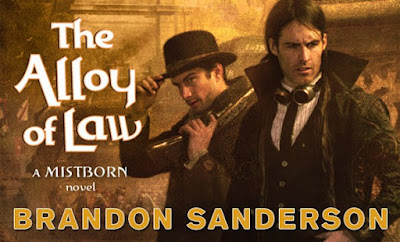 So Alloy of Law is a return to the wonderful world of Mistborn - albeit some hundreds of years later when technology has started to make its presence felt in the world. Steam-punk adventure clashes with the lawless wild west in setting drawn from Victorian sensibilities - throw in some underplayed romance, lots of 'bromance', an amazing magic system and a lot of non-stop action - guns fights and explosions galore - and then you realize how much fun this slim book packs in between its covers.

Some people would pan the book for being lighthearted - for all the witty banter and shallow fun this book is - but I would want to point out, that yes - this book was probably written in between more serious heavy books that Sanderson writes but it wears its claim right up top on it's sleeve - that it's great fun and a wholesome entertaining read. Sanderson just keeps getting better at it. His narrative flow is flawless and the way he builds up the action is unparalleled. The pacing is breakneck and we are swept along with the twists and turns of the story along with our protagonists.

Wax, a lawman from the Roughs ( equivalent to the lawless wild west ) is called back to the City to take over the operations of his House when his uncle gets killed in an untoward accident. House Ladrian that Wax is the heir to, is in financial trouble and Wax has to get his act together. But things in the city start going topsy turvy when a gang of robbers known only as the Vanishers are waylaying railway trains and also kidnapping women. Wax's cynical buddy from his six-shooter lawman days, Wayne pops up in town urging Wax to don back his old duster and pick up those "sterrions" to go after them criminals in the city. That's exactly what he does - when his betrothed gets kidnapped, making new friends, picking up old enemies while the world goes to hell.

It's a short book - and the scope is pretty personal. but the best part about the book is, the way Brandon manages to get the reader to care about these two gunmen out to save the city and its residents from a cynical antagonist with his misplaced fears and philosophy. He drags in a genius girl who underplays her confidence and intelligence from the world - plays for an interesting undertone of romance that is never explored though. I loved Wayne - for his loud mouthed boorish attempts at humor and self-deprecation but Wax as a character really drove the story forwards. The brilliant Marasi is never given too much face time sadly. Other characters are all fringe and serve only as plot points.

Enough has been praised for the detailed Magic system in the book - and Brandon as usual, is brilliant with the detailed system - Allomancy and Ferruchemistry(?) that allows for lot of neat tricks through out the book. What with our hero, Wax being a Twinborn who can harness both systems of magic. There are solid references to characters( or Gods?) from the past books but it doesn't deter the reading much. Nevertheless, it is a stand alone that is great fun and an easy read. A delicious snack or an appetizer before the big meal. Perhaps. I got into it as I got the next couple of books that complete the trilogy and a big part of the larger Cosmere that Brandon is drawing up.

Brandon Sanderson continues to be in blazing form and this is just another jewel in that embellished crown on that head. More power to you, Sir Sanderson.
Book Review Brandon Sanderson Fantasy Mistborn steampunk Western