Sorcerer of the Wildeeps by Kai Ashante Wilson

January 24, 2016
The second novella from tor.com that I'm reading and hot damn, is it good! Sorcerer of the Wildeeps is a heart-wrenching densely layered beautiful novella - in the style of sword-and-sorcery fantasy novel but one that remains truly literary in its execution. Kai Ashante should be writing a full fledged novel now and I will be jumping on board for sure. 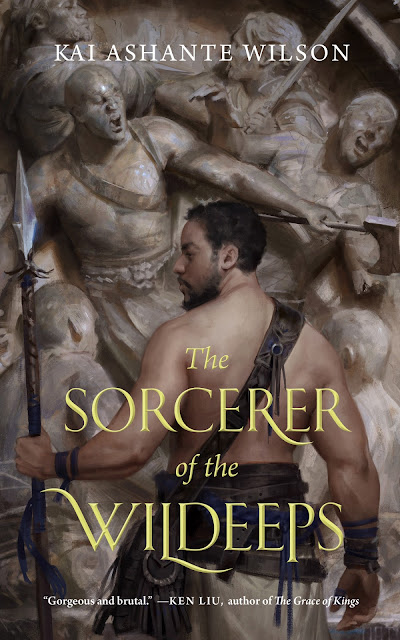 At a little over two hundred pages, Kai builds a world that is deep and profoundly interesting in its construct. Is this Earth a few hundred years in the future or a world altogether new? I couldn't figure. Angels and Demi Gods have left for their heavenly abodes. Demane and Isa, the two central characters of the book are the only ones left, behind great grand-children to the older gods, trying to learn the ways of normal human civilizations, bickering and learning to negotiate the worth of yellow colored metal coins and such useless trivial pursuits. Eking out life as a mercenary band of soldiers protecting rich merchants caravans. Now the premise of the story is simple enough - a band of mercenaries as caravan-guards have to see the group through this densely forested wildlands called Wildeeps - believed to be cursed and under the threat of a predatory monster that looks like a mutant sabre-toothed tiger with magical abilities. The group is led by this mysteriously enchanting Captain Isa - and Demane, called a sorcerer by his brothers, is the healer and the second-in-command in that group. The novel (-lette?) follows the adventures of this group as they head towards this cursed Wildeeps in the meanwhile establishing and exploring the relationships between the various brothers of that caravan-guard.

Now Demane is a pretty solidly fleshed character - his emotional and turbulent tryst with the Captain whom he is madly in love with, his backstory being fleshed out in flashbacks hitting us in perfect sequence and his manner of trying to fit in with the human soldiers in the camp. Truly the star of the narrative, we get to know what shapes and drives Demane's actions and its consequences throughout the story. Now Captain, on the other hand, is still a mystery. We know he is a demigod as well but we are never privy to his thoughts, So we really never figure out what drives this enigmatic leader of men and gods - and in that open ended climax, Kai Ashante drives the spear-point right through our thumping hearts as he leaves us to figure out what really happened.

As far as the narrative goes, it is lyrical and beautiful - but sometimes it does get pretty dense and obfuscatory. Hence while the book is short in scope, it takes a lot of hard reading. Kai mixes in African-american lingo in the middle of it - meshing up a classical beautiful sentence with the harsh hip-hop language that should be jarring but some how comes across as though it belongs in this strange fascinating world. It's a book I am in awe of. I don't claim to have understood all of it but nevertheless, I am in awe of it. ( especially those fat foot-notes at the end of the chapters that gives us glimpses of the world and leave us all the more crazed and confused!)

As we are caught up in the minutiae of the hunt, a bloody filthy adventure that rips and roars across the pages, thrashing through the dense undergrowth of the wildeeps, our hearts pounding with the excitement and fear for the lives our heroes, Kai Ashante has achieved in this tiny space a complex and wonderfully written piece of literature that will force us to think. About relationships, of the age old man versus wild paradigm explored anew and the sheer delight of his prose and the fantastical weirdness presented by its narrative.
2015 Books Epic Fantasy Kai Ashante Wilson novella tor books