December 31, 2015
Dave vs the Monsters, Emergence is the first book in the Dave Hooper trilogy featuring a middle-aged oil-rig safety officer who gets dragged into a fight between humans and monsters who live in the ‘under-realm’ – the first book details the war that starts off when the monsters ‘emerge’ onto Earth, when some accidental portals are opened between the two realms. 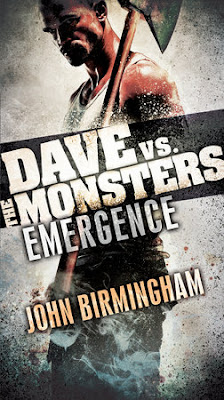 Now Dave Hooper is the ultimate cad, a worthless jerk who loves nothing more than holidaying off the rig with exotic women, bowlful of cocaine and other such stuff that lets him forget his responsibilities in the real world. Not only on the job but to his kids and wife. A frequent guilt-trip when Dave thinks about his wife, soon to be divorced but never really making any dent on the selfish pleasure-trip that he always gravitates to. It’s kind of sad that there are absolutely no redeeming qualities about this character that could make us like him – since the future of the world – facing this otherworldly horde on a marauding blood-feverish rampage - now rests on him.
I liked the beginning of the book and in fact was intrigued by the initial chapters, tracing the blazing inferno on the oil rig that signals the first sighting of the monsters. The first battle scene as well is fantastically portrayed. In fact, the change in POV – to that of Battle master of the Horde – was a total scream. But then things went downhill from there on.

Dave kills monster in a stroke of luck. Dave inherits super powers. And then on, it’s a drag where the military ( Joint Special Operations Centre, JSOC) takes Dave under their wing and we spend a lot of ztime just jetting from one location to the other or undergoing tests that prove Dave is in fact the Avenging Angel that the world has been blessed with.
Dave never rises above himself. And that for me, was the dampener. He still is fixated on women and having sex, is a complete racial stereotype and yaks his mouth off inappropriately at all times. Nobody calls him out on his views – in fact one of the lead women actually may even like this jerk! (If by book two and three, this ‘liking’ goes that way of romance, then I swear to god, I will go ape shit on Dave!)
The interesting concept of the otherworldly hierarchy – of Grymms, Fangr, Hunns, Battlemasters and their Queen – was pretty nicely fleshed out. In fact, the POV change to a minor demon by the middle of the book – was a nice touch and is one saving feature. There is nothing wrong with John Birmingham’s writing – it just wasn’t hitting me in the right manner.

Overall, a book that was hyped by the internet about bringing in a certain freshness to the stale urban fantasy genre – that brings in underworld and otherworldly Monsters into the fray – that is ultimately let down by an oaf of a prime narrator in Dave Hooper who ticks off all the boxes against the ultimate jerk title. I am not sure if I will continue this series.
2015 Books Book Review Urban Fantasy