December 20, 2015
I am just coming off a binge watch of all thirteen episodes of Daredevil, season one. And man! What a brilliant watch! Marvel’s dark knight, Daredevil – an original series from Netflix really is an outstanding series, aesthetically and thematically being very dark – and realistic in terms of treatment of the comic book – comes out a winner at all levels. 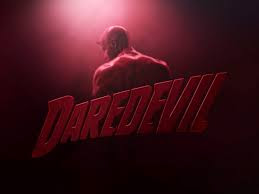 Hell’s Kitchen, the neighbourhood where the story plays out is home for Matt Murdoch, a blind lawyer by day and vigilante by night, cleaning up the evil in the city. Shady human traffickers and shadier real estate developers, the backside of Manhattan’s city skyscraper is the breeding ground for many such. And the kingpin of all this, is Wilson Fiske – a man who deludes himself into believing that he is “cleaning” up the city himself, making it a beautiful place to live in. First season pits Matt against Fiske in a game of shadows that ups the ante – when it comes to suspense and violence as we head towards the climax.

The atmosphere is so rightly dark throughout the series – maybe letting up a little towards the last few episodes. Capturing the comic book sensibilities so purrfectly. What appealed to me so much, was the beautifully choreographed action scenes. Where typically superhero action sequences are about flying cars and exploding buildings, this one’s about crunching bones and splattering blood. It’s visceral and real – and oh so, painful to watch. There’s this corridor fight scene in episode-2 that is probably one of the most realistic fight scenes ever, showing that the masked vigilante actually gets tired, breathless, choking and gasping but continues on with the fight. 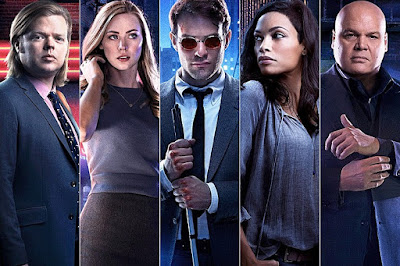 But hey, the action doesn’t define a series. It’s the brooding sense of evil that fills up the screen every time Fiske shows up. That suspense waiting on the knife-edge when Daredevil is up against the bad guys. It paints that grey dark picture of a Marvel universe we are used to in the comic books – a world racked with crime and corruption and a few good men at the ground level trying to make a difference. The early episodes of the show concentrate on the origin story – of how Matt became a crime fighter, taking us back to his childhood, bonds with his dad and his training. But as the show moves on, the crimes in the city are all being perpetrated by one master agent, a man in the shadows – the Kingpin. And then the focus is on the showdown between him and the hero. The tales build around that. There is a gritty noire feel – a mix of police procedural tied up with a superhero tale. Reporters in the city digging around for truth. Being helped in the night by the masked vigilante. A superhero grounded in his ‘human’-ness.

As far as performances go, it is top notch. None of the actors feel out of place. British actor Charlie Cox owns the role of Daredevil, lending a kind of suave nobility mixed with gut-wrenching vulnerability to the blind, yet ‘super’-sensitive lawyer out to right the wrongs in his city. He is at home, leaping and spinning around in that gravity-defying action sequences, cut up and bleeding roguish-charm, bringing in that hurt catholic sensibilities to the role of Matt Murdoch. He is ably supported in this by Elden Henson who plays his attorney-partner and wingman Foggy Nelson’s role ( the goofy comic relief at times) and Deborah Ann Woll’s character of Karen Page – who brings in the right mix of bright-eyed damsel in distress and strong-headed resourcefulness to the role. But the star of the show truly is Vincent D’Onofrio playing Fiske. Alternating between vicious and vulnerable, a man torn by his need to “make his city beautiful” but who chooses the wrong ways to do so. His mood lapses into mindless violence is frightening – but so is his heart-rending portrayal of a lonely heart trying to woo the woman of his desires. Vondie Curtis-Hall playing the super-reporter Ben Ulrich brings in the touch of gritty realism to the show. 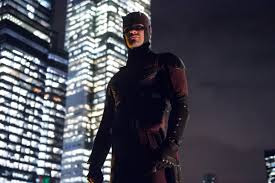 Overall, a brilliant start to the series in season one. One grouch I have is with the character killings – and they are many! Like George RR Martin’s treatment of our favorites, this show too is callous on that front – there are some brilliant actors whose potential is curtailed with such character killings ( and I won’t be spoilery here with letting the names out but watch out!)
But hey – the final verdict: Daredevil’s entertaining, gripping and absolutely shocking. I cannot wait to see what happens next – especially with the superhero having just donned his cape-outfit in that final episode reveal!
Daredevil netflix super hero TV Series