December 07, 2015
With this novella from Tor.com, Daniel Polansky has become my all-time favorite grim-dark author. 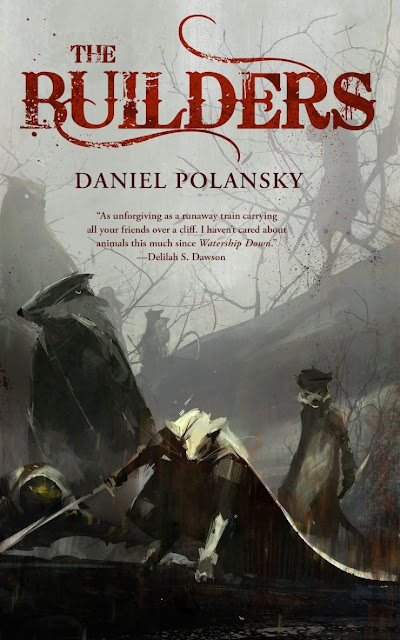 Builders packs in quite a lot of punch in this small novella, just over hundred and ninety pages that is a unique mix of spaghetti western by way of blood-soaked revenge story featuring fantastical furry intelligent animals banding together for one final "job".

This is my introduction to Polansky's works - having missed out the Low Town series of books - and what an introduction! Bullets flying fast, furry feathers exploding everywhere, sparse and stark dark humor filling up the silence left in the narrative when this anthropomorphic fantasy gets rolling. It's sheer genius to have got this right. And Daniel does a bang-up job of investing us in the bleak future of this group of animals - getting ready Kill-Bill style to avenge an old slight against a powerful enemy who had split them up once before.

A band of friends, getting together for that one last job is something we see in movies often. But Daniel puts in his own spin to things: A one-eyed mouse not given much to talking, a boastful stoat, a retired opossum - and quite a handful of other colorful "animal" characters walk into a bar, to plan this revenge. And before long, the well laid plans of men and mouse gets blown up to smithereens. With backstabbing, drama and suspense - all wrapped up in black gallows humor, the novella never slows down once the first shots are fired. The gaps in the narrative are left for the reader to fill in - like the name of our leader is just Captain. and he's got a dark, haunting past full of skeletons that he doesn't want to dig up.

Being a novella, Polansky doesn't really get time to focus in detail on each of the individual characters and their development - but they are all suitably well written. But the enigmatic Captain, the mouse nursing cold revenge in his heart for ages, is the  main protagonist and is the star of the show. His silence is eloquent and speaks much - and I hope Daniel someday goes back and writes shorts about the older days of the gang together.

There are brief moments of utter hilariousness interspersed between extreme Joe Abercrombiesque style of casual violence. Gritty and darkly comic, The Builders is a unique experiment that combines animal traits with human motivations of greed & revenge and one that am really happy to say, has succeeded. Daniel writes like he doesn't care. Without care for any of those yellow-lines of keeping within a genre boundary. He thwarts them and does so gleefully - writing a mouse into a Sergio Leone's moviescript is a class-act. You marry that into Brian Jacque's RedWall and pour in a bit of Kill Bill. You start to get the shape of it.

It's ultimately a roaring fun-ball of a story - over the top when it comes to the storyline but pitch-perfect in terms of characters, well-realized with their own quirks. Makes me want to go pick up all his previous books right away.
2015 Books Book Review Daniel Polansky Gritty novella tor books

@Nikki (Bookpunks.com) You should totally read this one. Trust me, you won't be sorry! Btw - loved the website adding you to the blogroll/
December 7, 2015 at 8:05 AM