September 24, 2015
Bradley is one of the genre's finest talents pushing the boundaries and scope of fantasy. And he proves it again in fantastic style with the Twelve Kings in Sharakhai, first book in the Song of the Shattered Sands series. His first series, Lays of Anuskaya introduced us to a russo-mythology inspired world with a touch of the forgotten Ottoman culture in lush detail. The Twelve Kings takes a step further and takes us right into the heart of a captivating and wondrous world of a desert civilization where Gods grant power to mortals, the undead walk the sands at night and subterfuge and intrigue rule the day. 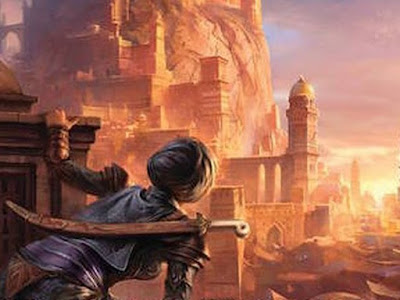 So Twelve Kings is set in the bustling desert metropolis of Sharakhai, a trading city in the middle of the great sprawling desert. A city that has slums, fighting pits, sprawling mansions, sheesha-denns and tea houses, communal baths and palaces on the hills jostling for the attention of the citizens. The fighting pits sees brutal competitions between champions of the sand-city with others wanting to test their skills and training from cities far and wide. Where a desert viper slithering between the feet of the combatants decide who fights. The most famous fighter, White Wolf hasn't lost a bout yet - and this fist-pumping action sequence right in the beginning introduces us to the nineteen year old Ceda, the real face behind the mask of the White Wolf - and the heroine of our desert adventure.

Ceda is a gutter-wren who grew up running the streets of Sharakhai with her close gang of friends. At nineteen, she still continues to run, carrying messages for a price - and on the holy night of Beht Zha'ir, Ceda actually discovers a secret along with her childhood best friend Emre. You see, the night is when the terrifying asirim, a horde of the undead force directly under the command of the Twelve kings, roam the streets looking for those marked by the Kings to be taken into undead service. And Ceda when she runs up against one of the foul killers is amazed when the asirim doesn't kill her but kisses her on the forehead.

Now Ceda has history with the kings. This is where Bradley uses the flashback sequences very smartly to build up the backstory and fill us in on what makes Ceda so bitter, the reason for her simmering rage. The sensual writing just drew me in - as the world opened up. The first sequence where Ceda meets the desert witch Saliyah and is able to witness future visions of herself - of receiving an ebon blade from one of the Kings himself as a Blood Maiden - all this made for enthralling visuals in my mind as I sped on. We learn that Ceda's mother was executed by the Kings and hung at the ramparts of the city for all to see - and so Ceda has made it her life's mission to exact revenge.

And yet, this isn't a simple straightforward story of a girl's revenge. There's magic. and then there's blood magic. Plots thicken as other players enter the fray - Ramahd, a noble from the neighboring city of Quaimiri, wants to capture the head of this rebellion group called Moonless Host. Who are hell bent on removing the taint of the Twelve Kings from Sharakhai. Ramahd has his own reasons but aiding him is his sister-in-law, Meryam - another unreliable character whose motivations are shrouded in secret and who can also channel blood-magic and wreck havoc against anyone.

The third major POV is Ceda's best friend, Emre - whose story arc in my opinion was the weakest. He plays second fiddle to different people throughout the story but his staunch unwavering loyalty to Ceda and his earnest efforts to do good make him a pretty endearing character.

The best aspect of any of Bradley's work is the stupendous world building. I could feel the choke of the desert air, the cacophony of the slum bazaars, the terrifying howls of the black laughers, the music of the durbars and the clash of the shamshirs renting the air. I could smell the roasted pistachios, the honeyed rose-water and the thousand-layer sweets in the market. The world was alive and I was so immersed in the achingly beautiful descriptions of the desert civilization as I read on.

And with Ceda, Bradley has given us one of the most remarkable heroines in Fantasy genre. Tough as nails, resolute and very resourceful, Ceda is a fantastic protagonist who goes through hell to see justice served for her mother. Sometimes we forget that she is only nineteen. I had to suspend my belief at certain points in the story to go with the flow - Ceda goes through a lot in the book and by the end of book-one in the series, we still feel much of the secrets are yet to be spilled. There are layers to Ceda's story and they unfold in lush style through the flashback sequences.

The pacing is a bit of a slow-burn with respect to the overall plot of the series - we head off into darker corners of Sharakhai with different tangential narratives - all of them interesting and gripping yes - but sometimes I felt it weighed down the pacing.

The Twelve Kings are still a mystery - each of them with their own set of terrible prowess and yet their POV chapters are unreliable - as there are seeds of doubts sown in my mind about each of them, whether they would uphold their four-hundred year old secret or will they turn on each other? There are Gods thrown into the mix - and first book is just the opening salvo for a very ambitious series.

Character arcs are just beginning and we know we're in for one hell of an adventure - riding over the sand dunes, unlocking the mysteries of the adichara petals - as Ceda infiltrates deep into the enemy territories as one of the Blood Maidens. The conspiracies thicken, history reveals treachery and backstabbing. Bradley has created one of the most enthralling and hauntingly immersive worlds in Sharakhai and lovers of epic fantasy should definitely brave the dunes and the killing fields to walk beside Cedahmin Ahyanesh as she sets out to complete her mission in the coming books. This one's going straight up the top of my best reads for 2015, richly deserved four stars and above.
2015 Books Book Review Bradley Beaulieu Epic Fantasy