August 24, 2015
Dawnbreaker, the third book in the Legends of the Duskwalker series by Jay Posey from Angry Robot was a much awaited book, personally at least. Marking an end to this intense and satisfying series where the world is quivering in the shadow of an unknown apocalypse, reduced to broken buildings and grey concrete ash and pockets of humanity huddled in fear of the dark. 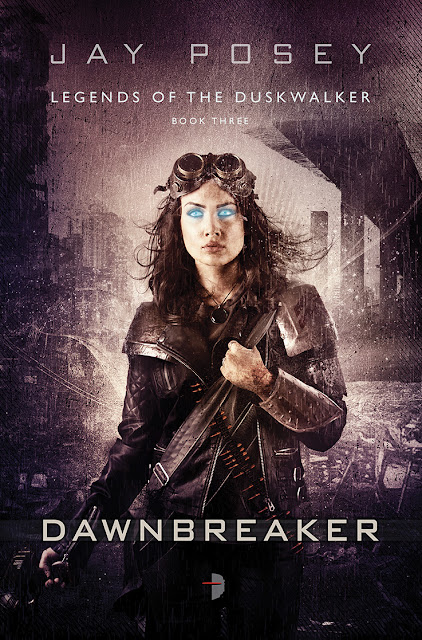 I was blown away by the imaginative and new world that Jay (Posey) had built up in Three – a desolate landscape scarred by some unseen apocalypse where people live on the edge of danger on a daily basis, huddled within modest cityscapes surrounded by concrete desert-lands and hunted at night by cyborg-zombies. Jay draws up an exceptionally well thought out digital communication systems in place and then goes on populate this barren world with some hard-hitting realistic protagonists, flawed and vulnerable to a fault and living truly on the edge. The underlying human emotions that drive the characters to do what they do, though, still remains similar to the raw reality of our world today – greed, ego, honor, bravery, selflessness – thus establishing that connect to the reader.

While Book-one took us on the high of a road warrior tale – blistering action and an intense drama dripping with tension all through to an explosive climax, Book-two took on a more sedate pace. Without a strong single lead (spoilers for book-one!), we instead were focused on a whole military team – the security detail for Wren and Cass, intent on seeing them through to some place safe while the villains of the series mount an all-encompassing attack on the fortress-like city of Morningside.

Dawnbreaker picks up right after the events of book-two- Cass is still moving along with the military team under Gamble and co. just outside Morningside while Wren is safe with JCharles in this town called Greenstone. Asher – now a digital presence who can control the minds of Weir is still hunting them down both.

Inside Greenstone, Wren still the craven boy inflicted with self-doubts meets up with a stranger called Haiku who claims to be Three’s brother. And as the past is relived, Haiku promises to take Wren to meet their ‘Master’ who could probably train Wren to take on Asher. Wren after a strenuous journey across the Strand again, finally reaches the lair of the ‘Master’ – only to discover that maybe he has bitten off more than what he can chew. Old secrets about the world before are revealed, training starts in earnest and it’s a sort of coming-of-age for Young Wren.

In the meantime, Cass is on the run – a deadly cat-and-mouse game with Asher trying to keep ahead of him, leading him away from Wren and also keeping Gamble’s larger team safe. She is discovering secrets about herself in the process – and things are coming to a head with Asher bringing together all the Weir around for a final all or nothing attack – on the town of Greenstone.

The Greenstone folks, JCharles and the rest meanwhile haven’t been sitting idle. With his second innings at life painstakingly built up in this town and with a wife and kid to protect as well, he isn’t ready to fold up without a fight. Older favors are called forth – some old faces reappear while some new ones surface – Interesting cameos one and all and a rag-tag army hurriedly put together gets ready for that final showdown.

The book in some ways follows a predictable plot pattern – Wren has always been the center of the story and we knew that someday he is destined for greatness. In the Dawnbreaker, he finally gets a sensei to unlock all that potential. And who better than the one who brought up Three himself? Jay keeps the training episodes pretty interesting – and he also uses the ‘Master’ as a foil to reveal the secrets of an older destroyed world. Haiku while another interesting addition to the mix, sadly has little more to do than temper Wren's impatience and make sure he doesn't give up.The history and backstories kept things at a nice boil, the training was pretty innovative and Jay even hits us with the odd philosophical meanderings in the guise of the ‘Master’. And yet somewhere along the way, my issues with Wren, the ‘Gifted One’ never got resolved. He still remains a child, too young to take on the burden of saving the world. And while yes he tries, he remains riddled with doubts and confusion. A nine year old, who remains so except for the fag end wherein he redeemed himself in a hurried ending/climax.

Cass is the focal point for much of the action that unfolds in part-three. And yes, it is gritty, full of suspense and absolutely riveting. I got closer to Gamble and her company of ‘bruisers packing quite a bit of steel’ – folks like Mouse, the doc and Sky, the long-range shooter – the troubles and travails of the group helped us get past those brusque military like efficiency charade and take a peekaboo at the real people behind all that.

My personal vote among the characters here goes to JCharles. He came out as the most refreshing character, real, honest and up front – and he also brought in a motley bunch of thugs and do-gooders (some seriously interesting characters who probably deserve their own spin-off novellas at least) in the end in a bid to stave off the Weir attack on Greenstone.

Jay’s prose still remains top-class – he can create a compelling claustrophobic scene where the desolate barren landscape comes alive in front of you and the nerve-wracking tension of trying to get through a night filled with the cyborg-horrors out to hunt you is beautifully painted in the third book as well. Asked to choose, I would still choose Three as his best book till date. There are parts where Jay comes close to recreating the charm of his first book – with the training sequences and some claustrophobia-inducing realistic scenes featuring Cass and the Weir – but Dawnbreaker as a book that binds together a lot of perspectives and brings the overall story-arc to a closure is a pretty satisfying read. The book has a lot of heart and enthusiasm going for it – and I really appreciated the manner in which Jay ended the series. Not going for an over-the-top glorified end-battle but a pretty neat cerebral twist at the end.

Part science-fiction, part horror, all dark post-apocalyptic fiction, Legends of the Duskwalker is definitely one of the more fun, entertaining series out there – if you’re looking for something new – that promises to redefine the boundaries of genre fiction, then definitely try this one. It’s full of futuristic gadgetry, horrifying cyborg-zombies and filled with racy mind numbing shooter-game action-sequences. In other words,  it is non-stop fun. Recommended.
2015 Books Angry Robot Book Review Jay Posey