March 09, 2015
The Awesome by Eva Darrows is a fun little package – urban fantasy at its riotous LMAO best. The name itself should give you a clue that this is a book that doesn't take itself seriously. A name that screams teenage indifference, self-absorbed cocky attitudes. The Awesome features "I am cool. Yes I know it. I am THE Awesome" Maggie Cunningham, a precocious seventeen-year protagonist who represents the geeky, know-it-all, self-obsessed teenagers, who by the way is also an apprentice to her mother – an acclaimed monster hunter herself. The twist in the story is..that she has to ‘get laid’ to become a federally registered full-fledged hunter. The Awesome thus splays open the teenager version of the pandora's box: Full of all the dating-problems, drunken-sex parties and sugary first-kisses ( and all post-kiss insecurities and the emotional rollercoaster rides that follows) along with some hairy jeepers-creepers creating problems in thier daily life. Read fanged monsters as is evident on that beee-a-uutiful cover. 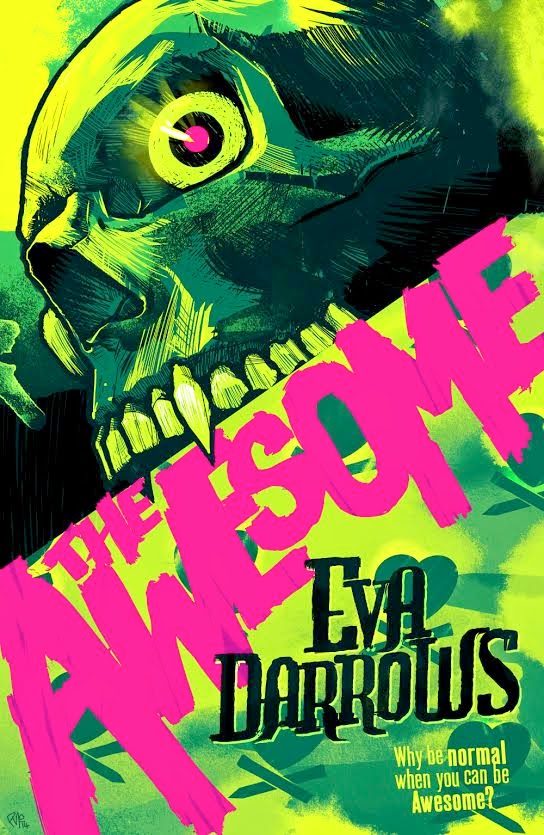 So Maggie is a home-schooled, mostly friendless (discounting her best friend Juliet) utterly intense teenager whose idea of fun on a Friday night is to get her freak on – read put on battle gear consisting of sharpened stakes, holy-water balloons stuffed into her bosom and knives strapped to the boots – and go hunting supernatural terrors who bump up in night time Massachusetts. Along with her mother, Janice (“Part rock-star, part Ninja, secret love-child of Jet Li and Lady Gaga – with a penchant to experiment her hair color that goes from pink, purple to sometimes green and blue and usually drove a pick-up truck or white kidnapper vans!)

Now Maggie is pretty sincere in following up on her mother’s footsteps and is trying hard to become a licensed and independent monster hunter -ie to find her groove in this world where vampires, ghouls, the walking dead and other pointy-horn thingies roam the night. In fact, the opening chapter of the book sets up the mood for the rest of the story – a backstory of her first act of monster-hunting that is a jet-setting laugh-riot. Where slapstick humour mixes with furious action and is narrated by a self-absorbed narcissistic snarky seventeen-year self. she is full of herself.  the cocky attitude that comes in at that age. Coz well, she is awesome, you know. And with that you pretty well guess how the rest of the book is going.

So Maggie reluctantly takes up her mom’s well-meaning advice (“If you're not up for boys, you're more than welcome to find yourself a nice girl. I'm hip.. I'm happening. I am totally down with you crazy kids exploring your sexuality.") and tries to hitch up with Ian - a sweet naive boy her best friend Juliet introduces her to at this party. Things don't go according to plan - mainly because Ian is on a rebound-after-being-ditched-by-girlfriend and is stone-drunk. But Ian - being the nice boy that he is - persists because, hey Maggie is THE awesome and a very cool girl to hang out with.

And while this domestic drama is unfolding in her life, Maggie - still being a virgin - attracts the bloodlust of a young vampire - whom her trigger-happy foul-mouthed mother of a monster-hunter happily dispatches to kingdom come by blowing her head into an ectoplasmic mound of slimey stuff. And the victim being the single progeny of some high-ranking vampire prince, Maggie and her mom are stuck between a rock and hard place. or as hard a place can be, when confronted by hordes of bloodsucking Vampires and Ghouls.  What follows is how Maggie extricates themselves from this bother of a spot - in her own ingenious ways. Thus earning her stripes to be a first-class Monster-Hunter. and yes, get laid of course.

It's a completely hilarious set-up - and Eva's writing is top-notch. We are reminded a bit of Chuck Wendig's Miriam Black in Maggie's profanity-laced outbursts at life's unfairness. In a good way. Flighty without taking any prisoners, Eva drills us onwards in this non-stop comic-action caper - where things go from bad to worse in a second's notice. Massachussets at night is a dangerous place - and Eva's prose brings the dangers alive. in a irreverent completely slapstick manner and she get's the narrator's voice pat-down. a surly teenager sulking through her date-disasters and then trying to cope with problems larger than her missing tampons - like a Hulk-strong Undead girl - ressurected from death and forced to shack up with Maggie and Janice, a Russian mobster-chick, a slick vampire prince who does pilates on the ground - Not to mention boyfriend issues and Mother-issues. It's a complicated life for a teenager. Her tumultuous deeply loving relationship and bonding with her mom is absolutely delightful stuff.( "Other people expressed affection with warm sentiments and kisses. I used death threats and demeaning language. Don't judge.")

So in parting, if you haven't experienced Maggie Cunningham yet, then you should. The Awesome is a nonstop fun express - poking fun at everything including itself.  A protagonist that I look forward to meeting again soon.
2015 Books Book Review Eva Darrows Urban Fantasy