The yearly pilgrimage where we dutifully buy tickets and trudge to the big screens to pay homage to the King Khan, Shahrukh Khan. His 2014 movie, Happy New Year directed by Farah Khan got released today and Howzah! We were in on the celebrations. First day first show. Literally. 10 ‘oclock on the dot. A 2-day 1200 KM drive back – and – forth from Madurai didn’t deter our spirits. This was a yearly pilgrimage and we would never miss the darshan. 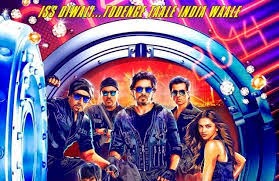 Now with Farah Khan at the helm of the affairs, we really weren’t expecting this to fire up our brain synapses. We were fully prepared to leave it at home. We knew it is a heist movie. Not an Ocean’s Eleven. More like a Charlie’s Chalees Chor. You know what to expect. A fun-filled ride. Glitzy songs. Some slap-stick bro-code humour between the male leads. [ Apart from SRK, it boasts of at least three more : Abhishek Bachan the drunkard Tapori with a penchant to puke, yuck I know! Sonu Sood the hunky slab of meat who elicits the winky “Call-Me” offers from chicks all around, Boman Irani a fifty-year old parsi who babbles like a five-year old and lives under the thumb of his fiendish mother] The mandatory SRK pose. And a healthy dose of over-the-top patriotism. ( Hey remember Main Hoon Na? I loved that nonsense!] Now is that too much to expect?

The movie delivers on all these fronts. in excess! So before I get carried away, a look at the wafer-thin plotline. Chandramohan something something – known far and wide as Charlie ( Don’t ask me. Farah’s got this thing about “Engleesh” names.) is a pit-fighter who in spite of being the boston university “topper” cannot earn money in any legit jobs. Because his father is a thief (And the stigma spread across the world? So a US topper couldn’t really land a legit job? Phbbbbttt…) and Charlie thinks he is a loser. In fact he has a habit of breaking things down to “two things” [ Do cheezein like those 2X2 matrix by the McKinsey consultants] There are only two types of people. Winners and Losers. And that Fate is an unfaithful mistress.

Now – Charlie is hell-bent on removing that stigma of being a thief’s son. An injustice dealt out to his father who was deceived by this character called Charan Grover ( played by a menacing Jackie Shroff) that resulted in this whole screwed-up life. And Charlie has been planning for eight years for his revenge. An opportunity arises when diamonds worth more than three hundred crore dollars in the grey market are to be stored in Atlantis, Dubai under Grover’s safekeeping.

Charlie puts together a crack-team.

- A safe-cracker specialist who thinks he is a chick magnet ( Boman Irani is wasted in this epic role)
- A hacker boy-genius ( Vivaan Shah. Is this the boy’s debut? Seriously what a launch vehicle! I cannot wait to hear what Naseeruddin Shah had to comment about this movie!)
- An ex-army bomb-squad specialist ( Sonu Sood. He is also called Jack. Remember Farah’s obsession with Engleesh? Yeah. And hell, those pecks had more screen time and dialogues than him the actor. )
- And topped off by a street-side tapori whose only role is to impersonate the magnate’s son. (“Aila! Double Role. Ackha Same-to-Same! Just like the movies”)

Now the only role left on the team is that of the bomb-shell. Bring in bar-dancer Mohini of the twinkling eyes and fetish for “Engleesh” ( Deepika Padukone with the ghosts of Chennai Express still inside her has got a weird accent again. And this time – vacillates with consummate ease between the vampy smoky hot seductress to the large-bindi-on-forehead and nose-ring-waali small-town girl with dreams of starting a “dense” school for the unprivileged. Seriously?)

After this – the movie is a confused riot between a lot of “nonsense ki raat” dance routines and a badly executed onscreen parody of English heist movies. There are scenes that put you to sleep out of sheer boredom while some, rare and far between are downright gems. This was probably Farah Khan’s pet project to get SRK back into her camp after Akshay Kumar tarnished her filmmaker status. And it definitely is a tribute in many ways to the romantic hero of our generation. SRK and others mouth dialogues from all his previous movies with random disdain. [ Deepika’s “Yeh Saath Minute” was definitely a killer ] And hell – what is with the fetish for male torsos? Starting from SRK’s eight-pack and two-nipple close-up shots in the hilarious intro to Sonu Sood’s sculpted pecks. Whoa!

As far as performances go, well – SRK sleep-walks, hams away to glory and even gets a shot at talking about “India of today”. It’s a tribute to the man after all and he just hogs the camera. Deepika Padukone has done this role a zillion times before. The small-town girl who acts like a Bazaaroo aurat with her itsy-bitsy clothes and big ambitions. Oh if you were wondering what her role was for the entire heist operation, I still haven’t figured that out. She does the odd-dance routines, swings around the pole and generally sets things on fire. The others, well – not really worth mentioning. I felt bad for Abhishek Bachan. He gets to play a double role, he is arguably the best dancer of the group with his signature “snake” moves and actually has pretty much the best dialogue of the movie. (“Nandu Bhidee…Dimaag ke Keedee!” I think we will have kids screaming this dialog with relish every time he comes back on the big screen. Which I think will be a long time now.)

Songs except for Manwa Laage ( another lovely song by Shreya Goshal!) were forgettable. The dance – oh my effing gawd – was an assault on the senses. The character quirks were terrible. Puking violently? Reall? Did Sajid Khan suggest that?

Anyways – high on the gloss-and-masala entertainment-factor, the movie is like the waves. With its fair share of lows and highs, it recedes quickly from the memory. A botched-up narrative that mixes world-dancing championship with a diamond-heist, this movie is certainly not going to be the one that people remember Shahrukh for.  If you love SRK, then you might not walk out. But barely so.
20014 Movies movie review shahrukh