I still haven’t come to terms with this question, do I love Russian literature?

I tried Tolstoy’s epic, War and Peace. Not once but twice. And I failed both times to complete it. Dostoevsky’s short stories made me a fan but his longer books had just too much going on to invest me in as a serious reader, all this at a younger tender impressionable age.
As an adult my tastes veered away from the contemporary into speculative and I was yet to find anyone who brought in the flavors or Russia – the strong smells of vodka, the white snow and the bleak grey hopelessness - into Fantasy or Science Fiction.

And then came Bradley P. Beaulieu – who has written a deep, well researched fantasy novel set in an alternate world of mountainous archipelago completely inspired by the Russian and East European settings. Then more recently, Peter Higgins brought the love and intrigue back to that Soviet-Russian hitting us squarely between the eyes with his excellent oddball genre-bending WolfHound Century ( Here is my review of the same)
I admit, Winds of Khalakovo ( what a lovely sounding name huh? Brings in the image of an exotic wind swept place high up on some mountains! Exactly what the author had in mind I suppose) didn’t so much as knock me down as I wanted a book to. I wanted to love this book when I heard about it. A book that doesn’t follow the hoi-polloi and expound on knights, treacherous backstabbing prince and princesses playing that dangerous game of thrones. Instead here, we have Russian Counts, Prince and Princesses, an indigenous set of people who can bind their minds to spirits of water, fire, wind, sky and earth, flying airships, muskets, cherkeskas and a whole lot of fun with a completely original magic system. 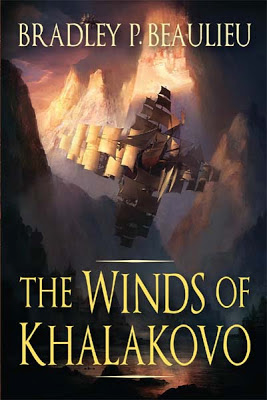 The story is set in the inhospitable lands of Khalakovo, a mountainous archipelago of seven islands and focuses on Prince Nikandr, our protagonist who at the time the book opens is starting to suffer from a wasting disease that is rampant in this province. Nikandr is betrothed to Princess Atiana, the third daughter of one of the neighboring province’s  Duke. But Nikandr is in love with Rehada, one of the indigenous Aramahn whore.  In the larger background, there has always been a constant struggle between the ruling Duchies, who are referred to as the Landed and the Aramahn, nomadic original inhabitants of the archipelago. Among the Aramahn, are these set of people called Maharraht, who possess the ability to call forth spirits from a parallel world to ours and bind these spirits to do their bidding. The Maharaht hate the Landed with a vigor and passion unparalleled and won’t rest until the Landed are wiped out. Meanwhile, among the Duchies the imperial colonists and rulers, power hungry Dukes choose sides when the Grand Duke of the entire Duchy gets killed in a freak attack involving a fire spirit gone rogue.  This leads to a political imbroglio that threatens to spill out and break into an all-out war. In this fray come a mysterious boy and his Aramahn handler who might just have power enough to end the entire world or save it. How Nikandr’s fate is bound to the fate to this new boy and how this swashbuckling complex plot plays out in an gorgeously detailed russo-inspired world forms the main story.

Bradley spins a great tale – Complex plot with multiple POVs, competent prose peppered with brilliant poignant dialogues apt for the bleak setting of the story and riveting details in terms of world building. He’s no stranger to fiction and his writing is what elevates this tale to the level of detail that is being compared to works of Steven Erikson’s Malazan books.

However, when it comes to pacing, the book seesaws like a crazy horse gone wild. especially the first half I had a tough time crawling through. The use of Russian words while probably an instrument to infuse originality did make it a little annoying. But the action sequences were where the structure fell through. Use of airships and fights aboard the same while a cool concept, did bring in some confusion to my reading. But things pick up around part-two. The magic system, with the help of Spirits – called Hazhan who are lured into the mortal world and bound by the Maharraht was perhaps the most innovative system I have read about. Sanskrit names for the spirits – Hava, Jal, Suura, Dhosha etc found me nodding my head and smiling.

Overall, with a rich gloriously detailed world full of symbolism, Winds of Khalakovo announces the arrival of a super talented epic fantasy author in Bradley who has chosen to tread the brave path – eschewing the traditional medieval euro-inspired fantasy worlds – Lays of Anuskaya is an intelligent series with layered complex characters you grow to love at the end of book one. An intelligent high fantasy full of original magic and swashbuckling adventure. Bradley is no Patrick Rothfuss but he definitely is in for a long successful innings. Winds of change, a breath of fresh air. Three stars.
Book Review Bradley Beaulieu debut night shade books Russia