Robert Downey Jr. is to Tony Stark, what Sean Connery meant to James Bond in those heady days. He’s become iconic. With the release of Iron Man-3, where he’s flat out exceeded pretty much any linear yardstick of comparisons thrown at him, Downey Jr. has gone to stratospheric heights of Super-Hero Stardom. 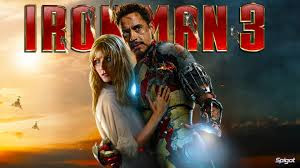 The third movie in the Iron-Man franchise from the Marvel Comics stable, Iron Man-3 is an all-stops pulled out flat-out entertainer executed on an grandiose spectacular scale. There is nothing to complain in the movie ( ahem. Barring a few deus-ex-machina moments, but heck, for the sake of pure unadulterated entertainment, I am willing to suspend my disbelief and let Tony and gang have their way!)

A hero who is willing to show his human vulnerability and wears it like a shield in fact through the movie, dread-inducing villians ( you got not one, but two of them!), a romantic tension that crackles between the lead pair and a brilliant explosive climax that is a glowering marvel of action-fantasy engineering. What else do you want? Damn, this fits so well into that summer blockbuster pantheon. Tony Stark aka Robert Downey Jr. you made my summer. 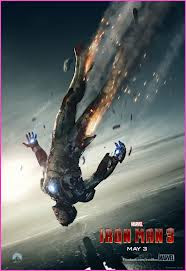 The movie starts with Tony reminiscing one of his older one night stands with a genius bio-scientist in 1999 Switzerland and also his brief encounter with another man who is going to change his life completely later on. He calls this, “Creating our own demons”.

In the present, Tony struggles to divide time and attention between his love interest, Pepper pots ( played by Gwenyth Paltrow who finally gets enough meat to impress the audience and make sure they remember her at the end of the movie) and his hobby of building out metal suits which now respond to heat pattern changes and Tony’s unspoken will.  Hanging like a dark cloud over his tranquil existence is the presence of notorious terrorist named the Manadarin who’s got US quaking in fear and anticipation. When Tony issues an open challenge to the Mandarin, all hell breaks loose and pits Tony against two of the most dangerous adversaries he has ever faced. The movie is a rollercoaster after this with Tony trying to outwit and outsmart the Mandarin. Astonishing twists and reveals later, Tony is joined by his WarMachine buddy Colonel Rhodes, played by Don Cheadle who surprisingly gets to share some good jokes with Tony, in an effort to bring down the curtains on Mandarin’s war of terror.  Some heart-stopping action set pieces that will blow your mind – the mid-air rescue of passengers from the blown-out AirForce One, the brutal hand-to-hand combat dance of survival in an off-kilter sleepy town and of course the complete decimation of the Malibu-residence of the rich boy when Mandarin mounts a missile attack to reduce the fashionable residence to a pile of dust and rubble.

The difference between Iron-Man 2 and Iron-man 3 is in the treatment which is very apparent. This movie keeps throwing stuff at you and is so well paced and structured throughout that not for a single moment do you feel like your time is wasted. Iron Man-3 has much more soul and depth to the character of Iron Man - giving us a peek into the man behind the mask, the billionaire playboy eccentric genius who wears his heart on a sleeve and mouths insouciant seemingly random mutterings to himself in general. What Shane Black, the new director, has effectively done, is to lay bare that aggrieved panicky extremely humane Tony Stark inside his metal suite – whose electromagnetic heart still has the capability to love and endure.

For most parts of the movie, Tony is without his metal suit and that I think, has made the movie appeal to a wider variety of audience at varied levels. Robert Downey Jr. is a gold-rated actor and he delivers all the goods that Shane Black requires him to – as that human behind the iron mask. The raw anguish and the helplessness of Tony stuck in the middle of a nowhere town after having survived a hell-raiser bombing attack on his Malibu residence, the playful chiding mechanic who befriends the precocious youngster in love with toys and gadgets, the concerned Stark who cannot hide his feelings from his steady muse, Pepper Pots – Downey Jr sifts through these roles effortlessly giving us a multi-layered matured performance from the man who is so given to playing the indifferent, authority-hating, eccentric genius with his reflexive motor-mouthed mockery of pretty much anything that is thrown his way. We see him in a different light in this movie and man, don’t we love him. All this adds a rich layer to the entire Iron Man movie franchise that is unexpected but dazzling and welcome.

Agreed, the movie completely belongs to Robert Downey Jr. but hey – what makes him so in this movie is the presence of a couple of other super-badass larger-than-life embodiment of evil so black and so terrifying that you would have to applaud the choice of actors who played it. The immensely gifted Ben Kingsley plays the Osama-Bin-Laden inspired fearmonger terrorist called Mandarin who hijacks the US television to broadcast live killing and bombings. The other is Aldrich Killian, a roguishly charming bio-scientist played by Guy Pearce, who has probably discovered a technique by which to mass-produce regeneration of human limbs and thus produce super soldiers who can become lethal human-bombs – running off on an altogether completely different personal agenda which also has some revenge wrapped up in it. As his character puts it so well, “his greatest gift, desperation”  Both act brilliantly pulled off – the desired overcasting of dread and tension spreads through the movie.

Iron Man-3 is perhaps not the best of the comic-super-hero movies. But it’s the gold standard for pure entertainment through and through and no one can fault that. A darker, edgier, funnier and humane follow-through to the ultra successful franchise from Marvels  -coming close on the heels of that wildly exhilarating ride that was Avengers, Iron-Man 3 more than stands on its own merit as a good movie. Thumbs up, Downey Jr and Shane Black.
iron man marvel movie review robert downey jr

Anonymous said…
Good review Sachin. It’s a good start to enter Phase 2 of the Marvel Universe with, eventually leading to Thor: The Dark World.
May 3, 2013 at 2:42 PM