The Dragon's Path by Daniel Abraham

There is no denying that Daniel Abraham is a prolific writer. He has already churned out a full-fledged quartet series (One that bucks the trend and takes an absolutely delightful new setting for an epic fantasy series far removed from European Medieval settings – the Long Prince quartet. I have read the first two books but sadly never got around to finishing it as I couldn’t find the rest two books and I stopped it at that), is already co-authoring (James A Corey) a super ambitious project called the Expanse – a good old sci-fi sweeping series with already three books out and a lot many in the offing ( according to the author interview) – read the first one in that series, Leviathan Wakes, all-stops pulled out fantastic monster of a read that blew away my expectations – now he’s turned his attention back to traditional epic fantasy in familiar surroundings – The Dagger and the Coin, the first part being called the Dragon Path. 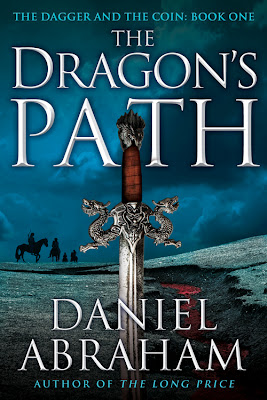 This is familiar grounds for those treated to dizzying heights of greatness as defined by GRRM’s acclaimed Song of Ice and Fire series. An obvious comparison, but Daniel Abraham does bring in his own deft touches to the whole world - a world created by dragons long ago and presently occupied by 13 sentient different races. Predominantly human but each of the race with its own distinct unique characteristics. Very measured with all smaller details of this new world etched out sharply by Abraham’s haunting prose and very evocative imagination – this book underwhelms with its lack of action and very little in terms of plot development.
But where the author shines, as is the case with his previous fantasy attempt, is to give us some unforgettable characters that live outside the pages, each a masterpiece by itself. Sufficient amount invested in some enormous character development, this book takes on the familiar plot of multiple POVs and each chapter dedicated to one. But satisfyingly enough, Abraham keeps his POVs countable.
Notable are the four – Captain Marcus, decorated soldier and once King-Killer now living a semi-retired life, yearning to stay out of trouble and doubles as a caravan guard on mercenary duty. Even though Marcus doesn’t change much and is restricted to baby-sitting Cithrin, the other major character in the story, am hoping as the story unfolds he would have a much greater role. Cithrin, an orphan girl who has grown up counting figures and learning the trade of banking, is now fleeing a burning city with all the treasures of the bank. Her character is the one that’s probably grown the most – a young vulnerable girl who has lost the only family she had to the ambitious overtures of lords playing the game of thrones, matures into a cunning banker who is willing to go any extent to keep her bank.  Fascinating character study. The next most interesting was of course, Geder Pallianko – an unwilling pawn in the game at the capital to keep an uneasy truce in the Kingdom. Geder would rather read obscure arcane essays on civilization than hold a sword in the battle, and yet strange twists of fate lands him right in the middle of the power games. Another of my favorites.  The fourth is Lord Dawson Kalliam, a man whose sense of right wrong and ethics is second only to his blind devotion to his King and his childhood friend. Dawson, even though can swing both ways, till book one sticks to his own strict sense of ethics and is constantly caught up in the vicious shadow games to keep the Kingdom from falling into the wrong hands.  All the characters have sufficient leaning towards grey and you keep guessing. This, probably saved the book for me.
It’s an introduction book and it’s clear that Abraham is setting his pieces ready for some greater action. The prologue makes it clear that there is a greater evil looming large – a Spider Goddess that would stop at nothing to devour the world. The world building is exquisite but disappointingly sparse. As Abraham plays it close to his heart giving us glimpses into this strange wonderful world built by dragons but refuses to divulge details that would draw us in completely. Even the thirteen different races – We really don’t get a full picture but it has definitely hooked me in. so maybe the ploy worked.
What was missing? Being fed on an overdose of grit and gore in fantasy settings in the near past, I definitely missed the action. But I ain’t complaining. I am a patient reader and will wait for Daniel Abraham to knock me down with the rest of the series.
I don’t know how many books are planned in this series but Daniel Abraham wastes no time in moving things deftly forward. King’s Blood is out and Tyrant’s Law is round the corner. So maybe it might just beat the Song of Ice and Fire for being one of my all time favorites if he does it right.
Four stars. Potential to become a genre greatest.