Under Heaven by Guy Gavriel Kay


Everybody who has read Guy Guvriel Kay has been gushing unequivocally great things about him. I as usual, am late to the party but having started off with one of his BEST Ever works, Under Heaven (published in 2010), I think I know pretty much how you guys feel about GGK. He’s an exquisitely talented writer. Under Heaven is easily one of the best pieces of literary fiction or historical fantasy (it sits easy on any shelf I would wager) that I’ve ever read. 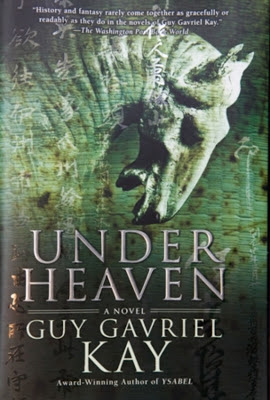 “Among the ten-thousand noises and the jade-and-gold and the whirling dust of Xinan, he had often stayed awake all night among friends, drinking spiced wine in the North District with the courtesans.”
So starts this literary epic that waltzes and dances to the words as woven by Guy Gavriel Kay – you get to “feel” the tone in that very first sentence that belies the depth of this multi-layered novel. It is deep, haunting and beautiful in ways that defies description.  Making a historical fantasy based on the Tang Dynasty of China – making it complex and truly epic in scope and deftly managing to balance the epic nature of his narrative, interweaving it with such authoritative expositions on a foreign culture is a skill for which the author needs to be lauded. I was swept into this beautiful world that smacked of traditions kept alive for eons, where culture was defined by poets, humility could win you the emperor’s blessings and arrogance could gift you untimely gruesome death, cruelty and ambition is cloaked in beautifully evocative poems. It’s a world full of Machiavellian machinations to win power and a single man gets irrevocably drawn into the dangerous double-crossing games of politics played at the courts when he gets a generous gift.
Under Heaven is the tale of one man, Shen Tai – Second son to a famous general in the Kitan Emperor’s army – who is trying to honor his father’s death by trying to bury thousands of dead men by a lakeside on the borders of Kitai and Tagur ( perhaps a faint resemblance to the sprawling China and neighbouring Mongol?)
Tai’s tranquil world (not so tranquil if you consider this: “Tai was several days' ride west of the fort, beyond that last outpost of empire, with the dead: with the lost crying at night and the bones of over a hundred thousand soldiers, lying white in falling moonlight or under the sun”) is shattered when a Kitan Princess married off to the Taguran Emperor to bring about a shaky peace, gifts Tai two hundred and fifty Sardian horses in recognition of this thankless valorous deed. This gift brings him into the cross hairs of the players in the court of the Emperor as this gift alone has increased his stature and people would kill to get their hands on such a gift.  It sets off a chain of events that changes the fate of Kitai Empire forever.
From here on, Tai’s life is turned upside down as he has to return back to the world he has given up two years ago. The plot builds at a rapid clip from here on as Guy brings in Kanlin assassins ( reminds you of Crouching Tiger, Hidden Dragon doesn’t it?), dancing courtesans skilled in playing the pipa music and pleasuring a man beyond his wildest dreams, the power players of the Court including the Emperor, a drunk poet who can re-write history with his skills at word play and lots and lots of interesting minor characters that enliven this eastern epic fantasy. He sketches back-stories stacked one on top of the other about Tai’s older life. This includes his ex-lover Spring Rain, a courtesan and now concubine to First Prime Minister to Emperor and his elder brother Shen Liu who is now chief advisor to the same guy.
While Tai is busy trying to come to grips with the fast moving lanes of the life back in Xinan, a parallel narrative tracks Tai’s sister Li-Mei who has been ransomed off as a princess to a native tribe leader as wife to one his heirs. This wick burned slightly slower for me – even though it had its moments. A wolf-man rescues the princess and she comes back a full circle to her beginnings. How this is tied to Tai’s tale of survival among the polite but cruel and ruthless political heavy weights is very interesting and I wont spoil it for you just yet. 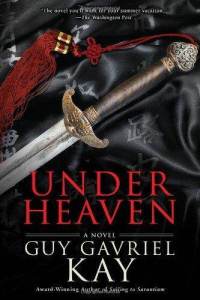 Guy has built this beautiful world based on 3rd century Tang dynasty of China that will haunt you with its very many novel customs – Little things spring out at you, be it the importance of tradition, honoring a man’s stature as decreed by his position or lineage, custom of greeting by bowing low with left fist to the right hand to show respect, the number of bows decrying the amount of respect. The folklores of fox-daijis who are femme fatale spirits who can kill a man through wild sex, wild geese that carry the souls to the underworld, the shamans of the wild Bogu tribe who can steal souls.  The various places described in the book: Lush and truly captivating, be it the pleasure houses of Xinan, the imperial orchards of the Emperor or even the lake side home of the protagonist.
Characters are a tour-de-force in this book. They live and breathe and mesmerize you. Especially the Women. Such strongly etched out characters – be it the beautiful Spring Rain who tempts fate by being brave enough to face her master’s wrath by sending Kanlin assassin to save her ex-lover or the devoted Wei Song whose dedication to the Kanlin cause is only matched by her unwavering loyalty to Shen Tai, the man she is assigned to protect (Have to confess, she reminded me SOO much of Zhang Ziyi!!). Or the exquisitely beautiful Consort to the Emperor Wei Jing who plays her own dangerous games, tempting emperors and men alike. Or of course Tai’s sister Li-Mei fashioning her own strange fate in the wilds beyond the Kitai empire.
Add to this ensemble other equally interesting minor characters like Tai’s brother who is a brilliantly clever courtier, the jealous and arrogant First Prime Minister, a scheming heir to the Empire, a drunk and loyal poet known far and wide as the Banished Immortal, the fat barbarian general who is known to be the dangerous man alive in the empire and many many more.

But what truly elevates the book to the levels of sublime is the writing itself. Poetic and lilting, a lovely enmeshing of fact fiction and fantasy that readers might be hard pressed to find anywhere else. This book truly is a classic in its genre and you shouldn’t miss yourself this treat by a truly master class writer in the genre of historical high fantasy.

Charverz said…
Probably my favourite Guy Kay book. I first met Guy when we were at law school together - I'm glad he chose not to pursue it as a career.
February 12, 2021 at 3:17 PM