This one’s been on my wishlist ever since it released. Touted to be an intense high-action caper and dubbed “The Matrix” of this decade, Looper is one hell of a mind-bending ride with suspense, action and drama all folded in neat little surprise packages throughout the movie. This definitely is one my top favorites for 2012. 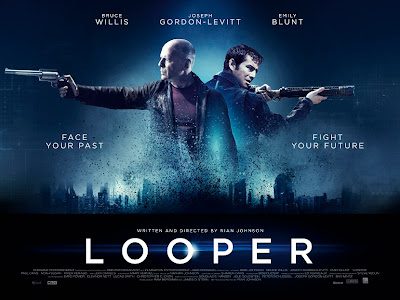 Rian Johnson, the writer/director for Looper proves yet again that Science Fiction can be super entertaining. In the leagues of Avatar and yet, a lot more brainier and thought-provoking venture that forces you to rethink the ethics of time travel. This movie is built on the premise of time-travel but as Bruce Willis puts it, “I don’t want to talk about the time-travel shit. If we start, we will be sitting here all day making diagrams with straws.” If we do dwell on the “what-ifs” and “how-abouts” that comes pre-loaded with the concept of time travel, we will definitely be dragging ourselves into a quicksand with no escape. So as the director prompts you to do, we should pretty much stick to the twists and turns of the movie, of which, rest assured, the movie has lots.

So Joe (Joseph-Gordon Levitt, now definitely one of my favorite leading actors – I first saw him in the sleepy hit “Look-out”, graduating from strength to strength, flush from the success of Dark Knight Rises) is a “Looper” – these are assassins who do clean up jobs for their mafia bosses ( who are thirty years in the future, 2074) – the “jobs” are sent back in time to 2044 landing in abandoned cane fields on a white tarpaulin where Joe and his brothers finish them off with a wicked-looking “blunderbuss” ( a homage to the Westerns I imagine). Joe’s got his life pretty good – the cash, the girl and a “steady” job. The catch to the job is that the assassins have to “close the loop” by killing a future version of himself, thus cutting off all ties with the mafia bosses. The future setting is pretty bleak – the streets are full of garbage, literal and human – something akin to the Blade Runner – life is cheap, floating motorbikes and shiny sports-cars are rare but available to the rich ones.  Joe’s life takes a U-turn when his future self (An Angry Looking Bruce Willis) turns the tables on his younger self and escapes into the night. That is called “Letting the Loop Run”. With this starts a mad chase and action caper with the younger Joe trying to “close the loop” while the older one tries to keep the younger one alive. Confused? Well hang on.

Bruce (Older Joe) has his own hidden agenda. The older version of Joe has basically come back in time to save his wife from being killed in the future; by erasing this mysterious super-villain known only as the Rainman who controls the future.  The younger Joe on the run from the mafia escapes into the country land onto an abandoned farm where he befriends a tough cowgirl (Emily Blunt looks every inch the tough farmgirl trying to etch out a single mom’s living strutting around with a long rifle and mouthing profanities at the drop of a hat) – Strange little twist of fate where Young Joe falls in love with the mom and vows to protect  her son – who, full points for guessing – is of course the Rainmaker’s young self. How this neat little puzzle gets solved is worth watching out for. I loved the movie for having brought all the loose little ends tied together in a perfect little way that blew my mind away.

As far as performances go, Levitt proves yet again he is an understated class actor, still a little under-rated by Hollywood and gives us a brilliantly layered performance – maturing from the easy-going blunderbuss-toting, junkie rich wastrel into a young man mature beyond his years, who connects the dots and takes on the responsibility of protecting a young mother and her toddler son.  He keeps the dramatic over-the-top action caper grounded. Bruce Willis, riding high on frustration and angst running against the grain of time out on a revenge mission, has his moments in the movie and delivers yet another stellar performance. Especially the fantastic scene in the diner where he confronts his rookie younger self and teaches him a thing or two on survival, easily one of the best in the movie. But overall, I definitely liked Levitt more as the hired gun caught in noman’s land in between vulnerable and badass and carrying off the role with elan and aplomb. Even Emily Blunt – Looks like she’s become a hot favorite to play lead heroines of the intelligent Science Fiction movies, remember Adjustment Bureau? – has a meaty role that she gives full justice to. Jeff Daniels, as the mafia boss, running the loopers in 2044 kinda lacked teeth and didn’t cut it enough for me. Peirre Gagnon, who plays Cid, the mystery boy also caught my attention – definitely one of the better child artiste performances.

Overall, a neat little addition to the Science Fiction DVD Collection : Even though second half does get a bit weary, it’s a solid work of A-grade film-making. Engrossing and entertaining, the director never lets the heavy duty time-warp confusions affect the story telling. It takes diversions into the lands of love and loss, solitude and sacrifice and still comes out as a thought provoking science fiction tale with a heart.
Full five stars.
Action Bruce Willis Josepth-Gordon Levitt movie review science fiction