Ready for a wild ride into a bug filled wilderness of Kameron Hurley's fertile brain ? ( Sorry couldn't resist that after having marveled at the sheer awesomeness of her first book!)


Kameron Hurley’s debut effort God's War - Part One of a Trilogy called Bel Dame Apocrypha has won hearts and brains all over the speculative fiction world. I got the copies free courtesy of a free giveaway by Night Shade Books - just before the release of the Third Book, Rapture.

God’s War shatters boundaries setting new horizons for writers of science fiction or fantasy of any kind. Whoever said SF cannot be married with Fantasy should probably talk to Ms. Hurley. She’ll give you an earful.  This book is a second world fantasy novel but with advanced technological settings that scream “science fiction” – though I really think that Ms.Hurley probably would be the queen of “Bug Fiction” or “BugPunk” as she terms it. 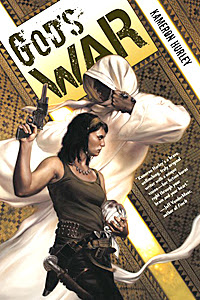 Bug Punk. Ugh! Does it bring on visions of creepy crawly insects fitted with some machinery? Ha ha. Hurley goes on to create a fascinatingly gripping new world vision that runs on bugs that substitute for advanced machinery. Hooked ? Wait, it’s gets more interesting and crafty. Hurley builds her bleak desert planet world with painstaking care – a world where two nations have been constantly at war and as a result, life is a cheap resource and boys or men are rare as they are all at the “front” – most don’t survive the war. As a result, It’s a world occupied by tough as nails life-hardened women who fit right into this harsh cruel world where women go to “breeding farms” to have children, take to boxing for sport and sell their “wombs” to make money.

“Nyx sold her womb somewhere between Punjai and Faleen, on the edge of the desert”

The very first sentence of the book captures the bleak pessimistic settings to the strange world, called Umayma where there are two suns, one blue at that and humanity relies on bugs to drive various low-and-high tech machinery. Bugs are controlled by Magicians and shape-shifting, albeit frowned upon, is not uncommon.  With it’s strong overtones of sexuality, race and religion, the planet reminded me of the Dune world as created by Frank Herbert.

Indeed, what drives pretty much most of the story is not the plot, that is choppy and eloquent in parts, but it’s delightfully fun characterization and wonderfully inventive world-building. The author throws us right into the middle of this hostile desert planet – and hopes for us to swim through the tons of strange new customs – a lot inspired by the Muslim culture ( what with the naquabs, muezzins, mosques etc and the Book! And a lot of India in the book too – Dhotis, Rotis and even bar-maids who do a “Namaste” with both hands folded and bowing down. Though all of this is cleverly restrained and woven into a flowing narrative of the story)

Nyxnissa Dashem or “Nyx” is probably one of the strongest female leads I’ve read in any book in the recent past. She’s devoid of emotions, is a practical no-nonsense “bounty” hunter, and is willing to go to any lengths to protect her team. In a world devoid of men, Nyx has a love-hate relationship with the second protagonist of the book, a “weak” magician called Rhys who is a foreigner to Nyx’s country. Even though his parts bring in a grounded balance to the narrative ( as you don’t always want to stick around in the festering hot headed brain of Nyx whose only solution to a problem is through violence) Nyx was such a strong counterpart that she completely drowns out his perspectives to the story. The story starts and ends with her. She’s not nice; who loves nice girls anyways huh? But frankly, it’s hard to just like her at one shot. She’s crude, she’s inclined to violence ( don’t get me wrong, some of the most wonderful action set pieces springs from this proclivity of Nyx to get into ridiculous situations because she uses her hands and legs more than she uses her brains) but she’s real. And she has a zany broken sense of honor that she’s not willing to let go of. Like trying to save her misfit bunch of bounty hunters.

While I enjoyed this opening ride into the Bel Dame Apocrypha series, I haven’t completely committed myself to it. It’s a hard read but an immensely satisfying one at that. Since what Kameron Hurley has done here is to completely throw that “Guidelines for writing Fantasy” tome out the window – she’s stuck to her creative guns (Big double barreled shotguns full of creative juices that spray out Bugs, Blue Suns and Shape Shifters J) and produced a remarkable novel, worth all the hype it’s been garnering in the world of speculative fiction. Ahem, got nominated for a Nebula too I think.

Four stars. For the wild ride powered by BugPunk and a wonderfully strong female lead who can kick and fight her way out of hell if need be.