Book Review - The King of Crags: Book 2 in Memory and Flames series


Second book in the Memory and Flames series. Stephen Deas still plays to his strengths, that is a jet setting story burning on rocket fuel with multiple POVs, bloody battles fought in the air, some bits of magic thrown in for good measure, not a lot of world building but enough hints to visualize a fantastic one, and giant fire breathing mad dragons hurtling through the air and slamming into each other, searing up everything around them. 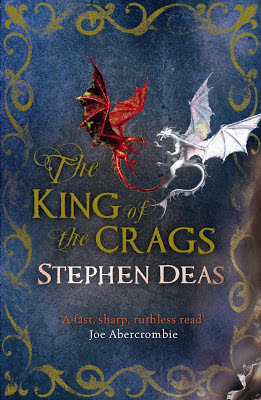 A good book that is again a breathless frenetic read. Deas has obviously sacrificed some quality for the sake of scorching pace that he sets up again. Book Two is even faster than Book One. Frankly in terms of plot, not too much really happens. Book One had all the set pieces being arrayed in place and now all of it comes to play. An all-out dragon-war in the realms of the dragon lords.
What made Stephen Deas call this book, the King of the Crags, is still a mystery to me. Book One builds an aura around this strange king who has never stepped out of his own lair for ages and Book two promises to pitch him in as one of the leading players. Alas! Deas himself seems to have got carried away in the the swirling mad pace he’s going for in this book and forgets to give us anything substantial about this mysterious character. And one more thing about the author, he’s definitely not averse to some head chopping, so if you grew to like your Kings or Queens, well just watch out.
A few new characters are in - though they seem wish-wash pale compared to the strong ones from Book One. Jehal and quite a few of my favorites still rule the roost, though again the first few pages, till Part-One, about 18% of the book, reads like some new story and a little insipid one at that. Jehal still retains that grey cloak and we truly dont know his motives. I know I might get lynched for saying this, but for some reason, he reminded me of Tyrion Lannister from the Song of Ice and FIre series. ( yeah go ahead, hit me!) His banter with the Night Watchman of the Adamantine Palace, Vale Tassan was definitely one of the better lighter moments in this book. Vale’s character is new – a servant to the orders of the Speaker of the Realms, he is portrayed as the strong silent man forced to play out to the whimsical fancies of their petulant girl-Speaker Zafir. But now that I think about it, his cynicisms made him almost a carbon copy of Jehal’s snarky characterization.
From part-two onwards, we're transported back into the scheming ruthless world of the kings and queens now scurrying to get support for the war that is imminent. It takes off on wings from this part on and the whirlwind pace is sure to suck you in with the fates of these power mongers.
Sadly for me, Snow White the rogue dragon who was quite the star in Book One, really didn't have much to do in this book except for hunt and kill cattle for food and survive. Hopefully she comes back in Book three ? World Building falls by the way side – but hints through legends and stories abound – of the strange new world these dragon lords fight over.
The final few chapters of the book where war breaks out, Stephen Deas really applies himself into the glorious details. A dragon-war fought in the air with your fire breathing monsters shrieking and slamming into each other nicely sketched out. The feeling was as if I was right there harnessed to the rider's saddle on top of the beasts - definitely un-put-downable.

Overall I am a little disenchanted with the series but hopefully book three will put things back on track. Will pick it up a while later. Jehal and his scheming lover girl, Zafir can wait. For now i give it three stars.
Book Review Book Two. dragons Epic Fantasy Snow White Stephen Deas