This book is an unabashed butchery of all fantasy tropes you can think of. A blurb by the King of Gritty Fantasy himself, Joe Abercrombie sets the stage for you "Bold, Brutal and Making No compromises..Morgan doesn't so much as twist the clichés of fantasy as take an axe to them.."
Marking Richard Morgan's foray into Fantasy, the Steel Remains is a prized book you'll love if you like your epic fantasy tales dark, visceral and gory. Blood spritzes at a second's notice, people fly into guttural filthy curses at the drop of a hat, demons and ghouls out of your darkest nightmares leap out of the pages and you're always in the miserable company of this washed out war hero who bleeds rancor and cynicism out of every pore of his body. If you are still along for the ride, well sample this too: Extremely Strong Characterization, a no-nonsense plot that flies along at a break neck pace. Peppered with gratuitous explicit sex and some graphic violence (Mind blowing action sequences guaranteed to have you cringing and crouching for cover even as you read, it seems so real!!) 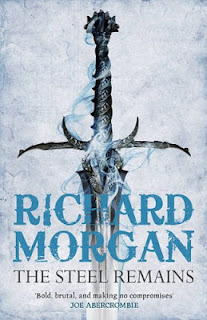 Tightly woven plot that remains uniquely fantastical with some deep overtones of Science fiction, it has been equal parts lauded and criticized for its unapologetic handling of a lot of themes like sexuality, races, politics to name a few. Needless to say, Morgan has ruffled quite a few feathers in the process. But I think he’s gone on to blast the doubting dorothies to outer space when he followed up this book with a sequel that amps all this themes and even the action to the next level.

For me, this book is a winner at several levels. For one, the hero Ringil Esikiath is not your typical farmboy with a Destiny to achieve. He’s a middle aged war hero whose best days of war are far behind him. His company of misfits includes a 207-year old alien “female” engineer and an ex-soldier of the empire who is now a clan leader and has to fight jealous brothers, religious zealots and even Gods. When Ringil is dragged back from exile to track down a cousin sold in slave-trade, the trail uncovers a plot that might endanger the peace of the entire world. And possibly the only thing that prevents this is Ringil’s band of misfits. Well, simple enough in terms of plot but Morgan’s handling of this stereotypical fantasy plot is bloody and brutal, quite refreshing actually. Next, Morgan’s world building is truly world class. Writing in brilliant evocative prose, Morgan builds up a dark world co-inhabited by different races: war-weary cynical humans slaves to all the vices known to mankind (slave trade, getting high on Krizanz akin to weed or grass all the time, debauchery and sex – name it!) and portals that allow aliens like the Scaled Lizards, Kiriath or Aldrain to come in at will into the same world.  He even traces back history of the world in terms of the wars fought to bring out peace, builds up an order of the societal hierarchy in which people live in. Religion plays a pivotal role – what with the Empire having no excuse but to tolerate foul mouthed religious clergies since they helped the current emperor’s father win the war – but the interesting aspect of religion was better played out on the steppe lands where Egar, the ex-soldier of the empire has to deal with Gods – known as the Sky Dwellers who frequently manifest themselves and meddle with the puny affairs of humans.

Ringil gets the lion share of character study as he broods over his past, quips off cynical snarky barbs and constantly wallows in self-pity and doubt. Compared to him, Egar is a much more confident no-nonsense clan leader having to fight with issues of religious nuts trying to whip a mob against his practical mannerisms. Archeth, the alien Kiriath engineer was much more of an underplay as she struggles to live on in this world which was abandoned by her alien-brethren. One character I thoroughly enjoyed was the emperor, Jhiral : Shifty as a snake, snarky to the core. You cannot help but love this guy who is fighting to keep his throne, but still indulges in insouciant debauchery.
You might be put off by the excessive vulgar profanity and explicit sex ( groans! The sex is as non-romanticized as possible and might leave you a little sickened!) – this was the one thing that was rather annoying for me and grated on the reading pleasure of an otherwise slick action-packed fast-paced fantasy novel.  The twists are a little too predictable though the final revelation did blow my mind.

Morgan brings all his strengths as an award winning SF writer to this book and it shines through – The Steel Remains is firmly an old school sword and sorcery story spun on its head, given some refreshing sensibilities daubed in dark humor and gritty cynical realism. Not for the squeamish, but c’mon! Richard Morgan writing a Fantasy Novel ? You never expected it to be a children’s picture book did you! Recommended. Four stars.
Book Review Epic Fantasy richard morgan Ringil Esikiath science fiction