I have not read Stephen Deas before. I should have. He’s already a phenomenon in the fantasy scene. Having completed an astounding epic fantasy series called the Memory of Flames, he’s sitting pretty on top of the pile. Adamantine Palace is his debut novel and introduces us to the world of Dragon Realms where Kings and Queens rule with an iron fist the lands divided between and pay their homage to the Speaker of the Realms, a powerful figure who arbitrates between the dragon lords and rules from the Adamantine Palace and of course, where the skies are ruled by the magnificent creatures of fire, dragons.

The first book traces the Machiavellian plots and the titanic struggles between the scheming kings and queens as they vie for the position of the Speaker. It also draws up a parallel plot of the dragons within this realm who are domesticated with the help of potions brewed by the alchemists and thus serve their riders in each kingdom. All except for one, the rogue dragon called Snow, the perfect white whose senses awaken and now lives only to avenge her sisters and brothers against the alchemists for having imprisoned the free dragon spirits. 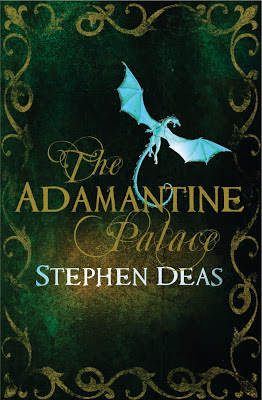 Stephen Deas’ first novel is a breezy attempt – without having gone over the top and kept the perfect balance – at epic fantasy drawing up an exciting new world filled with angry fire breathing dragons and traitorous prince and backstabbing princesses tied to each other’s fate as they plot and manipulate for the ultimate prize – the throne of the Adamantine Palace. He keeps the writing pretty simple – giving us a wickedly twisted plot written in clear lucid straightforward language pulling no punches – combine that with some well written action set pieces ( Ah! Soaring through the skies with the wind tearing at your clothes while the fire breathing monster underneath you scorches the sky with huge balls of fire, give more of that to me please! In fact, Deas sets the pace right in the prologue that starts off with a bang – on top of a dragon, nonetheless!) and deftly written court/palace intrigue that twists and tears through the book. Deas is no GRRM, though he tries earnestly and pretty hard. A decent bit of world building dealt with juicy morsels thrown in at random, a very engaging style of writing and some wonderful characters redeem him though.  There is very little magic in the book though, manifest only when Deas introduces us to some foreigners (TaiTaikayie – apologize for the spelling, but reminded me so much of the Dothrakis? Is it just me? ) for a brief while.  . Full points for the entertainment and having kept it engaging without wearing down the pace through info dumps. A lot of time a new author building his own world, gets excited and carried away by the stories and goes into a nose dive of tiresome lengthy expositions. Stephen Deas keeps a tight ship, straight as an arrow, Ace story telling.

Deas’ main characters are neither black nor white.  They are real, driven by the all-consuming desire to covet power. A bunch of scheming, bloodthirsty self-centered and ruthless power mongers. Chief among whom is Prince Jehal, a shameless insouciant womanizer who will charm his way into any girl’s (preferably princesses!), pants has no qualms about his ambitions and will use whoever will get him to his goals. Through sex, sycophancy or even the sword.  Potions and poisons, he swears by. His indeed, was the most colorful character that stuck with me throughout the book. The others, Queen Shezira with her own devious plans to become the speaker, plays her dice using her daughters as pawns in this game of power without any compunction or regrets. Princess Jaslyn, her daughter who loves her dragons more than humans, finally comes around caught in the web of politics by the end of the book, I am hoping to see more of her by book two and beyond. Princess Lystra plays the coy sassy princess betrothed to Jehal but sadly gets wasted as the plot thickens. I was so hoping Deas would use her better. Speaker Hyram who is about to name his heir, sadly remains a delusional old man who cannot match wits with the razor sharp cunningness of the others in this entangled twisted power play.

A parallel plot to this game of thrones, is the story of Snow. A dragon who has gone rogue and whose senses have awakened, who longs to free the rest of the dragons from the torpor brought on by the alchemists. Breathing fire, burning and destroying anything that comes in her way, Snow remained one of my high points of the book. Unapologetically aggressive, driven by the burning sense of correct a wrong, blazing through the skies – very enjoyable. With the dragon, is Kemir, an ordinary sell-sword (mercenary) caught up in this deadly game and who loses his only family, out to avenge his murdered cousin. Probably the weakest characterization among the lot.

Overall, a pretty fast light read. None of the conflicts introduced in book one come to a resolution and hence you would be itching to get your hands on the book 2. But yes a solid debut. I can already smell the fumes in the air, the stage is now set for a crackling book two. Bring on the King of the Crags. Let the world be ripped by the flames of revenge.
Book Review debut dragons Epic Fantasy Stephen Deas